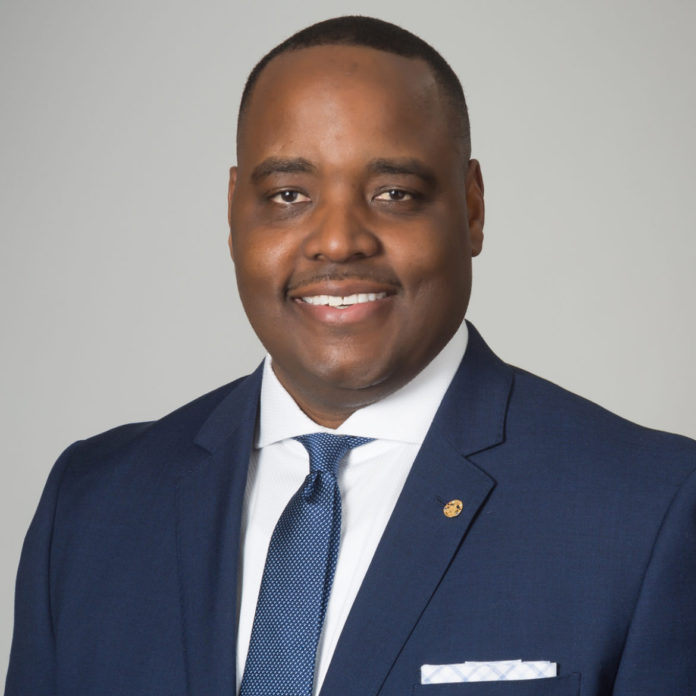 Ballard Spahr’s Denver office will havehas new leadership in the new year. Damon Barry, a partner who has been with the firm for five years, took over as office managing partner on Jan. 1.

Barry is a corporate M&A lawyer with a government affairs practice, and he also serves as outside general counsel to a number of midsized companies across the country.

When asked to describe himself, Barry said he’s a “family man” first and foremost. “I’m married with two lovely daughters that are the heart of what I do every day,” he said.

The Colorado native attended the University of Washington on a football scholarship and played in three consecutive Rose Bowls for the team. Following an injury that kept him away from the game, he started a non-profit organization that he later sold. After working for a bit, Barry later attended law school at the University of Nebraska, also on scholarship, “because I did pretty well at undergraduate, and I don’t like debt,” he said.

As a law student, Barry was offered full-time jobs at two large firms. But after chatting witha conversation with a man on an airplane who was turned out to be COO and president of a Colorado-based multinational, he ended up accepting an in-house position at the company, CSG Systems International, instead.

“I think a lot of folks need to understand that they never know where the next opportunity will come from. And you’ve got to be ready to kick down doors when an opportunity presents itself,” he said of that fateful flight and the job offer that came a couple months later.

Barry worked for CSG for 13 years, eventually becoming vice president of business affairs and deputy general counsel. While at the publicly traded company, he managed dozens of attorneys and staff and played a key role in transactions exceeding $3.5 billion in value. He left the company to work for a boutique firm, which was later acquired by Ballard Spahr.

He said his goals for his new role and the firm consist of an internal and an external agenda. Within the office, he hopes to foster a community of collaboration and mentorship. “Not that we don’t have it,” Barry said. “I just want to enhance it and encourage it because I think the stronger that community is, the more effective we will be in delivering first-rate legal services to our clients.”

“That’s how you build relationships,” Barry said. “And relationships, in my opinion, are the best way to create business for yourself and for the firm.” Community involvement is also important for on-campus and lateral recruitment, he added, noting that law students talk to each other about who is engaged in the community.

The firm’s diversity and inclusion initiatives are also a priority. “From a firmwide perspective, that’s important because our clients are pushing for that as well,” Barry said, adding clients want attorneys who look like the communities and clients they work with.

The legal profession in general has a lot of work to do in recruiting and retaining diverse attorneys, Barry said. “On the flip side, I think Ballard Spahr is ahead of the curve if you look at numbers. But I’m not satisfied with that.”

It’s not enough to have a chief diversity officer and “some great bullet points on your website,” Barry said, and he wants Ballard Spahr to continue to extend opportunities and partner roles to people of color and women.

“I’m an African-American. I’m office managing partner in a major market at an Am Law 100 firm,” he said. “I think Ballard is making the right steps. Now it’s my job when I’m here to make sure we continue that and we grow that. And you can only do that with opportunities.”

Mental health and attorney wellbeing will also be a focus, Barry said, especially when the firm transitions back to working in the office. “I think one of the challenges or opportunities that we have to focus on is individual wellbeing,” he said, noting the task requires “balancing efficiency and productivity versus teamwork and collaboration.”

COVID has made collaboration difficult, Barry said, especially when it comes to mentorship opportunities for younger attorneys. He’s a believer in the power of “organic” mentorships that arise when associates feel they can drop by a coworker’s office to ask a question or talk over a cup of coffee, but he recognizes there are few opportunities for those interactions right now.

One of Barry’s biggest tasks as managing partner will be navigating the transition back to the office. The decision to return will be guided by public health recommendations and state and local restrictions, but he said if he had to “put a bullseye” on a return date, he’d expect attorneys to start heading back during the summer. “But one thing we’ve learned over the past nine months is that bullseye moves regularly,” he added. “And we have to be flexible.”

In addition to questions of when to go back, the firm — and the legal profession in general — will have to consider whether to embrace new technology and remote work on a more permanent basis. Barry said the pandemic has made working with attorneys in the firm’s other offices easier. “We’ve been pushing that for a long time,” he said. “But this has given folks the right to say, ‘Yes, we can do it, and we have to do it.’”

Barry said he sees the firm’s Denver office as well-rounded in terms of practice areas, with attorneys who are leaders in several fields. But he noted there are a few growing niches that are doing especially well, such as the public finance group. “The Denver office is just hitting the ball out of the park… They’re just doing deals over deals,” Barry said. Other growing areas include the firm’s media and entertainment law group and its real estate practice.

The firm’s Boulder office has a “huge emerging growth practice,” Barry added, which is supported by some attorneys in the Denver office as well. “We have two offices in Colorado” he said. “But we have one face and we’re working together.”

Barry describes himself as “a team guy,” having grown up playing football and other sports, and he said he’s looking forward to the challenges of managing the office. “I look forward to getting folks — and these are intelligent, bright, alpha leaders — to be able to row a boat in the same direction,” he said. “That’s fun for me. That’s a challenge and it’s an opportunity.”