Since President Donald Trump took office, the finance and corporate world had been anticipating relief on banking regulations that were instituted after the 2008 financial meltdown. Late last month, the president signed a bill that will roll back many of those regulations for smaller financial institutions.

On May 24, Trump signed the Economic Growth, Regulatory Relief, and Consumer Protection Act, which removed a range of requirements and restrictions for banks, particularly those below certain size thresholds. The bill targets reforms instituted by the Dodd-Frank Act of 2010 such as the Volcker Rule that restricted entities from risky trading. While its amendments are less drastic than those proposed by other bills that have been introduced, the financial industry is seeing the new bill as a first step toward additional Dodd-Frank rollback.

The new bill installs a range of tweaks, from easing mortgage-lending requirements on community banks to exempting smaller banks from certain regulatory oversight in their trading and lending practices. After Dodd-Frank was enacted, banking organizations with at least $50 billion in assets were subject to law’s weightiest obligations. These “enhanced prudential standards” held banks to strict requirements in liquidity, stress testing and resolution planning. The new bill raises that threshold to banks with at least $250 billion assets.

The Economic Growth, Regulatory Relief, and Consumer Protection Act doesn’t go as far to undo banking regulations as other bills that were introduced in the past year. The Financial CHOICE Act of 2017 would have weakened the Consumer Financial Protection Bureau in addition to cutting back Dodd-Frank banking regulations. The bill had only progressed as far as passing the House in June 2017.

At least in the short term, the new bill is a bigger boon for smaller financial institutions than for the industry giants, said Zane Gilmer, a business litigator and partner at Stinson Leonard Street in Denver who works with financial industry clients. But it’s an encouraging sign for big banks, too, he added.

“From a larger institution’s perspective, this is still probably viewed positively as the administration is taking action to roll back the regulations from Dodd-Frank after the recession,” Gilmer said.

Many Dodd-Frank rules applied to financial institutions regardless of their size, yet the smaller entities didn’t have as many resources to comply with those rules as the larger ones did, Gilmer said. Smaller banks have also been seen as less responsible for the financial crisis, so restricting their trading and lending activity to the same degree made less sense, he added. A small-bank-focused measure would see the least resistance in Congress.

“You have to start somewhere, and if a rollback was going to happen in some regard, this was naturally the place to start,” Gilmer said.

As for how the bill will affect access to capital and financing, “it’s hard to say who will benefit most,” although it “will help open up the flow of lending, especially at the community bank level and at rural areas of the country,” Gilmer said. The bill exempts certain rural real estate transactions from appraisal requirements when there isn’t a certified appraiser available. 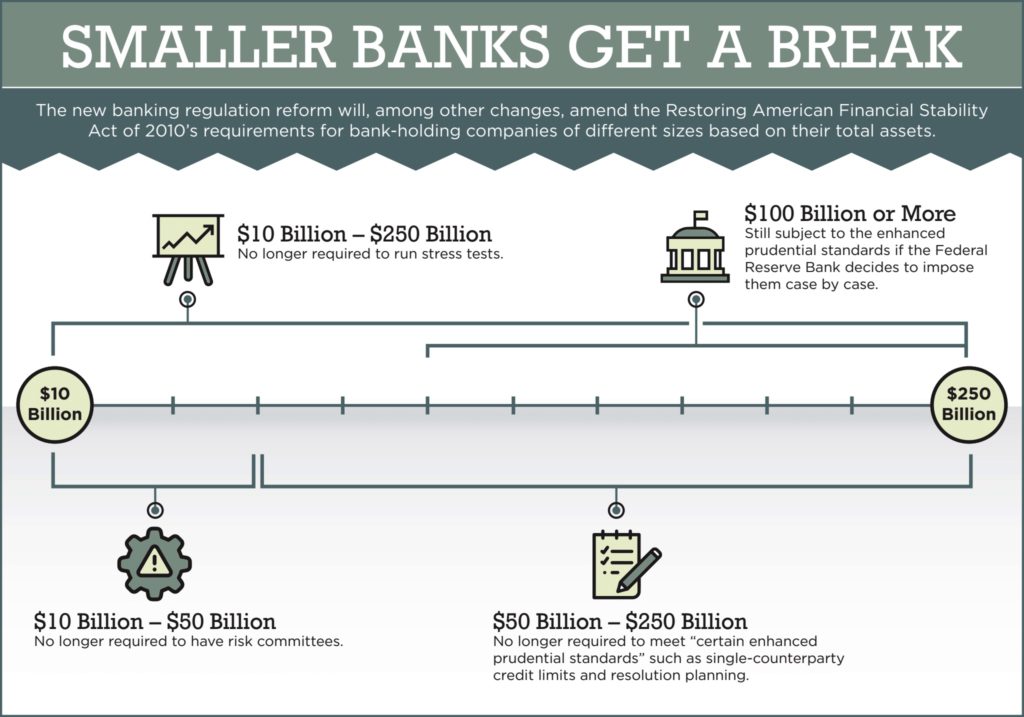 Also, smaller lenders will have an easier time underwriting mortgage loans as the bill will waive certain ability-to-pay requirements that they had to ensure under Dodd-Frank.

Regulatory reform for the finance industry is underway elsewhere. Not long after the reform bill passed, the Federal Reserve took steps to simplify the Volcker Rule through its own rulemaking process.

Mandated by the Dodd-Frank Act, the Volcker Rule restricts banks with federally insured deposits from “proprietary trading” or dealing in hedge funds or private equity funds.

Those activities were widely thought to have contributed to the 2008 financial meltdown. Wall Street and financial industry players have maligned the Volcker Rule for its complexity; JP Morgan Chase CEO Jamie Dimon notoriously said that complying with the rule required a lawyer and a psychiatrist.

Among other changes it proposed Wednesday, the Fed would eliminate the Volcker Rule’s presumption that any security a bank holds for 60 days or less is held for proprietary trading.

It would also categorize banks based on their size and level of trading activity, which it would then use to “tailor certain requirements of the rule.” In general, the Fed’s tweaks appear to do more to clarify the Volcker Rule than slash its requirements wholesale.

Gilmer said the Fed’s rulemaking on the Volcker Rule “is one of many examples to come” of Dodd-Frank rollback under the current administration. He added that the newly enacted bill was a first step — “dipping [a] toe in the water, if you will.”