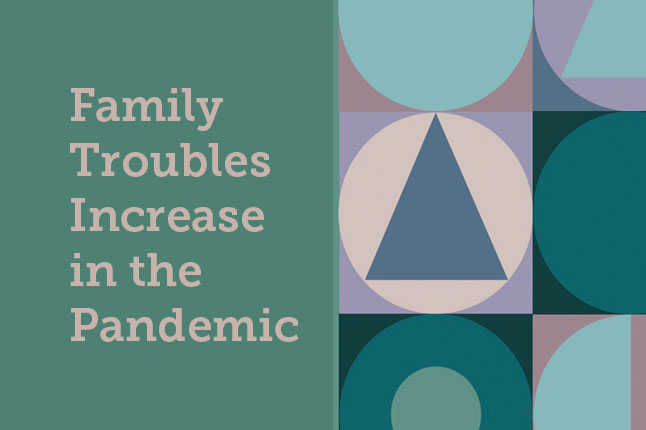 Suzanne Griffiths has seen how family stresses factor into family law cases. The pandemic has fed the fears of divorced couples fighting over custody, and pressures that come from the work-from-home environment, or losing work entirely, have caused troubles for other couples. Griffiths talked with Law Week about how the pandemic has affected work for her family law-focused firm, Griffiths Law.

LAW WEEK: We’ve all heard about how the work-from-home world has broken up relationships or increased divorce rates. What have you seen from inside the family law practice?

GRIFFITHS: It was quite an experience. Everybody had questions about what to do about COVID or was saying the father is irresponsible and he’s going out and I think the kids should stay with me. People were trying to resolve things, and we went through a patch between April and June where we had hearings set, and we had one answer for our clients: There is no court available to you. They do protection orders and life-and-death emergencies, and if you have anything else, we simply said there is no resolution, there is no judge. We essentially said there’s mediation and that’s it.

So, we were just mediating day after day. The mediators were wonderful. We did Zoom meetings from home, and some clients didn’t have the ability to do that, so we’d go to the office and meet with those clients. We settled a lot of cases, and a lot of trials between March and June were resolved. We were collaborative because we said, well, you’re either going to mediate this or you get nothing.

The divorce rate increased after July because people were finding it really, really, really difficult to stay in the same house. It was a lot of stress. There were also a lot of layoffs, especially older people, and it was turning people upside down.

There was enormous stress about children. People would travel, and you get one irresponsible person who would fly to California or Florida and come back and give the kid COVID and then give the other person COVID. Some judges would say we are going to send you to jail if you don’t give parenting time, and some judges would say hunker down and make up the parenting time when everything eases up. There were huge issues about whether to fly kids out of state, because remember, there was a big fear of touching.

Things have calmed down now, but there is a lot of anxiety. I can just tell you that it’s really, really busy. People hate each other right now, and in the midst of all that, there are a few who are coming together and saying, “what can we do [for resolution]?” So, there are some good people and some angry people.

LAW WEEK: How have the courts, in your experience, been handling things? Are you seeing consistency in the courts or getting a clear sense of how things will play out when you’re able to get to court?

GRIFFITHS: It was really a struggle. Come June and July, judges were learning to use Webex. We started to have hearings and status conferences with Webex, and some judges were excellent and highly efficient, some judges were struggling and doing phone calls and were doing contempt proceedings, on occasion, by phone.

Some attorneys were really bad. We had attorneys who were upside down, they had no sound, everything took longer, and they couldn’t figure it out, and the judges were patient. And people were running cases, and we were worrying about where we were going to send the paper copies of the exhibit. Some people could screenshare and some people could not screenshare. It was literally trial and error. We were telling clients we’re going to make the best of it, but sometimes you might have a three-hour hearing and you could spend 30 minutes while the attorney’s sound doesn’t work or they can’t hear or they’re upside down.

And sometimes they do feel short-changed. It used to be that they could have their moment, and have the hearing, and now some of us are getting 10 minutes on Webex. Some are feeling shortchanged. I think hearings are taking longer. But it largely depends on the efficiency and competence of the judge, and some are really great and some of us are struggling, and some of the older attorneys are struggling.Now, people have got much better, and some love Webex, and we are rolling.

LAW WEEK: In spite of the slowdown in the courts, have there been any major cases or statutory changes in your practice?

GRIFFITHS: There are some decisions coming about common law marriage with gay couples.

Christopher Griffiths in my firm ran two appeals, and they were flawless — the Court of Appeals seems extremely organized, they’ve got Webex running really well.

For gay couples, their marriages weren’t recognized. It’s going to be a key issue whether they recognize prior common law marriages. That will increase litigation.

LAW WEEK: Have you noticed changes going on in other areas, like child custody or child support? What are some of the major areas you’ve been dealing with changes at an issue level?

2019 was a great year, we had people with bonuses, and in January, the courts would take the viewpoint that you made all this money in 2019, you’ll make money in 2020. Now, the stock market is surging ahead, but in the real world there are a lot of people who are unemployed. People with good jobs who have never been laid off before. And it’s just frightening. It’s wreaking havoc. And it’s causing more maintenance modification hearings.

The big thing the courts have got to decide is whether this is a substantial and continuing change. So, are they making new laws? Probably not. I think everybody’s struggling with what to do in the pandemic with the current situation. It’s very difficult. There’s enormous stress with married couples.

Also, people are now left to homeschool their children. And that might be O.K. with a really good school or private schools where they can get tutors and home schools. But the clients who are calling me and are suffering the most are the people who have special needs kids. The ones that you cannot send to school. So, one of the biggest things to address to a judge — and we don’t have time because the courts are really backed up — is what do you do about the person who has a high-end job, and they physically cannot work, they cannot send the child to school, can’t send a child to daycare, their kid is sitting there 24/7, and they are unable to work. There are some children who have special needs, learning disabilities, ADHD, cerebral palsy, Down syndrome. Usually the state has incredible benefits for these people, and these people are sitting, and these clients are crying to me they can’t work. So, if you had to say one of the real problems, that is one of the issues.

LAW WEEK: Is there anything you expect to change or be an ongoing issue into 2021?

GRIFFITHS: I think many mediations are going to stay remote. From the client’s perspective, it saves the attorney traveling, and they’re effective.

And remote working is going to stick. I mean, we’re in a new world. If you vaccinated everybody, I don’t see 100% of the people coming back to work. But we’ve got a new world out there. It’s like inventing the telephone — nobody’s going to use a telegram anymore.

Initially, there was a hiccup, but people have found ways to work effectively.

And whatever a client wants to do — if they want to meet in person, we’ll meet in person; if they want to meet by Zoom, same thing. And I think it’s changed the way you do business. I consult with clients who might live in Fort Collins or are out of state. Before, they had to show up at our office and have their meeting. Now, I’m meeting with clients I would have never met with before because they would never have driven to my office. So, clients can pick who they like, because they’re all just a computer away.