A bill passed unanimously by the Colorado State Senate near the end of the session has fine tuned regulations on medical marijuana products. The shift could be foreshadowing a change in federal policy.

Marijuana is still classified as a Schedule I controlled substance, which, according to the Drug Enforcement Agency means it has no medicinal attributes. Recently, however, a Food and Drug Administration advisory panel recommended the approval of a cannabidiol (CBD) medicine, contradicting the stance of the DEA. Epidiolex, the CBD-based medicine in question, is used to treat an illness that causes seizures in children. Should the product be approved, it will be the first approved medicine to contain any cannabis-derived chemicals. As such, it might be a signal that the federal government is getting closer to rescheduling marijuana.

Greenwich Biosciences, the maker of Epidiolex, was the main backer of the bill, which has lain the groundwork for the drug to be legally prescribed and made available as soon as it is on the market. A question that remains is how the DEA will respond if the FDA does in fact approve Epidiolex.

Epidiolex’s FDA approval could provide a roadmap for other pharmaceuticals, Vicente Sederberg partner Christian Sederberg said, but it is also a reminder that all future cannabis-based medicines will still go through the same FDA processes that all medicines must. Sederberg thinks this isn’t just a chipping away at federal policy, “it’s an acknowledgement that the cannabis plant can and does produce substances that have a medical benefit.” Part of the significance of FDA approval is that a medicinal product from the cannabis plant has gone through the legal framework of DEA-approved research and FDA testing. It is nearly out of that process with a stamp of approval.

The bill that is now on Gov. John Hickenlooper’s desk included a legal redefinition of “marijuana” to exclude “prescription drug products approved by the federal food and drug administration and dispensed by a pharmacy or prescription drug outlet registered by the state of Colorado.”

Sederberg, whose firm is a self-described marijuana law firm, said that this redefinition is “just a clarification and not a substantial change.” According to Sederberg, a strict reading of the earlier marijuana laws would show that pharmacies were not allowed to sell marijuana or its products. House Bill 1187 allows for Epidiolex to be provided in pharmacies should it get approved. The redefinition allows for a distinction of this kind of product and more traditional cannabis products and their regulations.

The difference in this situation between Epidiolex and medical marijuana is how it is accessed. In Colorado, medical marijuana requires certification from a doctor, and an application must be filled out with the state, which requires a payment and is reviewed by staff at the Department of Public Health and Environment. Epidiolex would be able to be prescribed by a doctor, and patients could pick it up at their pharmacy or prescription drug outlet.

Bills regarding a change in CBD product classification or allowing prescription use have come up in California, Idaho, Nebraska, South Dakota and Wisconsin. Greenwich Biosciences is known to have played a role in the legislation in Nebraska and Colorado. In Nebraska, state Sen. Laura Ebke named Epidiolex at a bill hearing as a reason for rescheduling cannabidiol medicines under the Nebraska Controlled Substances Act. A pharmacist and consultant at Greenwich Biosciences, Bob Broadus, spoke at that hearing in support of cannabidiol medicines. The bills in Nebraska and South Dakota died. California’s bill has passed the state legislature. Wisconsin’s bill was passed in 2017. 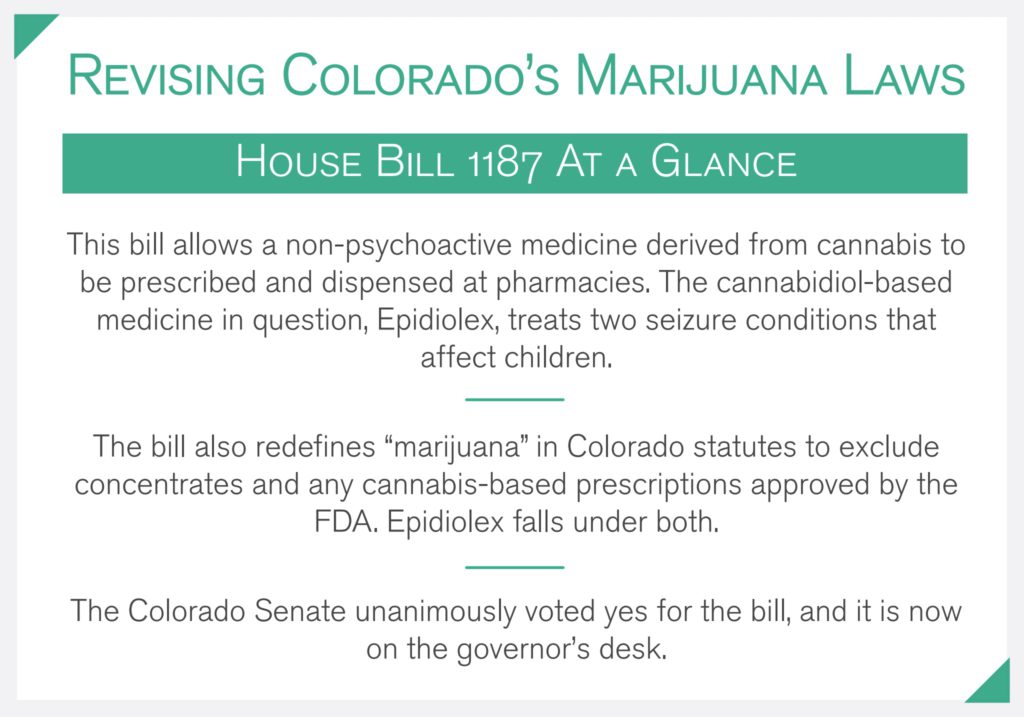 Greenwich Biosciences worked closely with the marijuana and hemp industries in Colorado to be sure it was working with the industries and not against them. There is still some trepidation within the cannabis community however. Steve Levine, a partner at Husch Blackwell who counsels on cannabis regulations said, “GW Pharma has demonstrated to the scientific community that cannabinoids derived from cannabis can provide health benefits.” The reason for concern is that big businesses will see the potential for entering the cannabis industry at a national scale and then dominate the industry since their coffers are so much larger.

A problem that could arise for Epidiolex is in the form of insurance coverage. To date, there is not much in the way of health insurance that covers use of cannabis products. “With regard to insurance and medicines, they will generally cover only FDA-approved medicines,” said Sederberg in an email. In regard to marijuana products being schedule I classified drugs, Sederberg continued to say, “After approval, the DEA has a limited amount of time to reschedule Epidiolex (not marijuana), likely to Schedule III or IV.” Schedule III drugs have a moderate to low potential for physical or psychological dependence as well as abuse. Schedule IV drugs have a low potential for abuse and dependence.