The Colorado secretary of state has until Sept. 5 to certify initiatives submitted for November’s general election, including two with the potential to have a wide-ranging impact on Colorado’s energy sector.

Initiative 97 would increase the setback requirement for any new oil and gas development in the state to 2,500 feet from any occupied structure or other area designated by the government. And Initiative 108 seeks to mitigate property value lost as a result of mineral development limited by 97 by requiring just compensation to private property owners when a government law or regulation reduces the property’s fair market value.

According to a July report from the Colorado Oil and Gas Conservation Commission, Initiative 97 would result in putting 54 percent of the state’s total land surface off limits to new oil and gas development. When considering non-federal land, the percentage increases to 84 percent.

Limiting a party’s ability to develop and extract minerals and profit from their own property rights would reduce the fair market value, and under 108, the property owner could claim compensation from the government.

“[Land rights] have a value placed on them because they can be developed,” said Crystal McDonough, a solo attorney who practices energy, natural resources and utilities. “Now let’s say 97 does pass, then all of a sudden that setback prohibits you from being able to develop that. Now you’re sitting on essentially a useless property asset.”

But for all the discussion about 108’s ties to the energy sector, the initiative does not mention any particular industry or type of regulation. And attorneys say broadening Colorado’s taking statute this way could have similarly wide-sweeping effects on litigation that can’t be fully understood until the statute’s implementation and aftermath.

Currently, Colorado’s taking statute says property can’t be taken or damaged for public or private use. Initiative 108 would add a whole new category to the statute by including a reduction in property’s fair market value. “[Taken or damaged] have a lot of meaning to them within the litigation context,” McDonough said. “So if you throw in a whole new category…I think that opens up the possibility for litigation opportunities or options for people who are in any situation of a taking, not just for minerals.” She added a taking usually means a complete literal taking of property, such as if a government takes it to build infrastructure like a road.

“So this would open up a whole new analysis as to what that compensation could be,” McDonough said. It would beg the question, for example, would a government’s taking of land to build a road now also come with a reduction in fair market value?

Alex Obrecht, an associate with BakerHostetler who practices in energy regulation and litigation, said 108’s inclusion of a reduction in market value would be a less onerous legal standard to prove than a complete or near-complete deprivation of value.

“It is no longer a substantial deprivation standard, it is a diminution in fair market value standard, which theoretically would be easier to prove,” he said. Initiative 108 could lead to an increase in taking claims of regulation having decreased fair market value, he said. He added governments may make the argument that substantial deprivation of value still has to occur, rather than simply a reduction of any amount, to claim compensation.

“So you will see, I think, arguments from either side based on the existing taking case law, and then also on the case law side of interpreting a diminution in fair market value,” Obrecht said. He said if any bright-line rule establishes a threshold for reduction in value to be compensable, it will have to be figured out through case-by-case “yard markers.”

Chantell Taylor, a partner at Snell & Wilmer who practices in government relations, said because of Initiative 108’s broad scope, she can imagine a wide range of scenarios that could give rise to litigation, including by private property owners who experience a reduction in value because of energy industry operations nearby.

But Initiative 108 could reach far beyond the industry, Taylor said, to other government-permitted developments that reduce private property value, such as a marijuana shop. 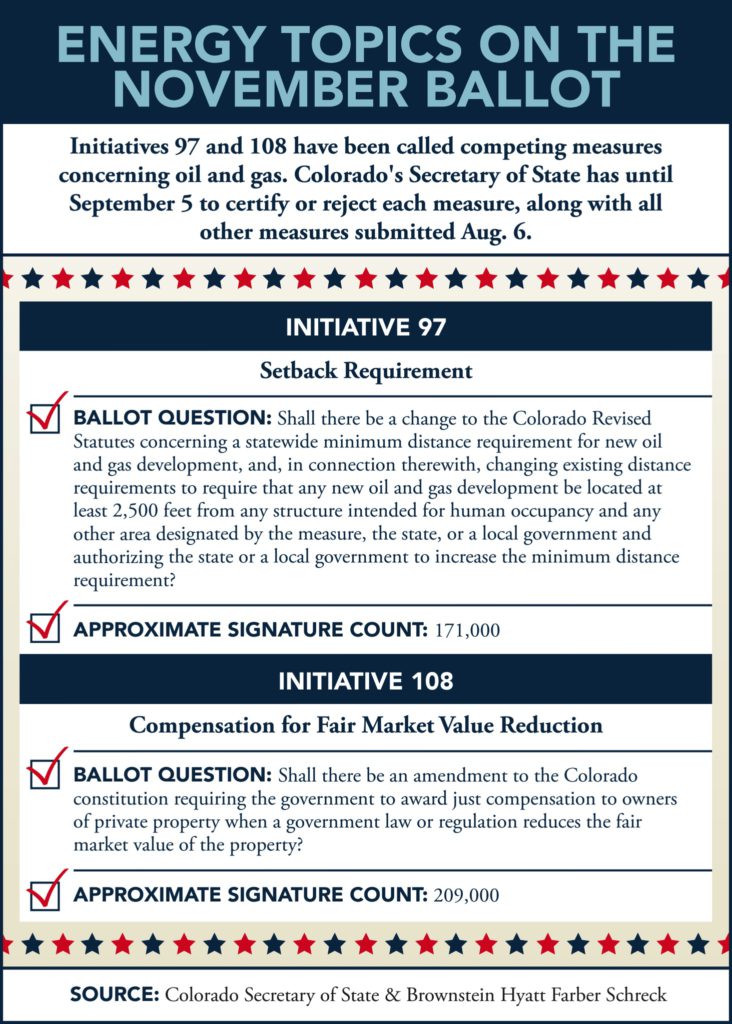 “I think that there are endless scenarios that create litigation out of this initiative, which is exactly why so many people are concerned that it is not really the solution to what is perceived as an oil and gas issue.”

Taylor added while ballot initiatives are examined to ensure they meet the state’s single-subject requirement, they typically are vetted after adoption to test whether they are constitutional or conflict with any other existing laws.

“Some consider this a flaw in our system,” she said. “We get these ideas, and well intended ideas, but voters end up voting on them, and the issues and the conflict have to be untangled later.”

McDonough said she believes it’s important for voters to consider how wide a berth Initiative 97 could have to hamstring oil and gas development in Colorado, not only because of the increase to the required setback distance itself but because of local governments’ ability to designate essentially any area a “vulnerable area” off limits to development, including public open spaces and irrigation canals.

“I think people definitely need to read the ballot initiative, read the proposed language for themselves to see what it says,” she said. “I think that’s the key to understanding all of this. Just read it, get an idea of what it says, and make your own decision.”