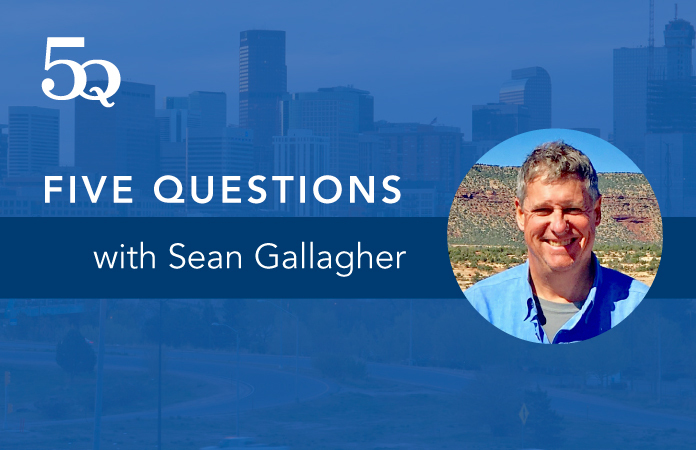 5Q is Law Week Colorado’s weekly gateway for members of the legal community to get acquainted with each other. Each week, you’ll hear from lawyers, judges and legal academics across Colorado. We ask industry professionals a range of questions from their thoughts on the challenges facing the profession to their personal interests. Their responses are lightly edited for clarity and space. Let us know if you’d like to be included by emailing [email protected]. You can also contact journalist Hank Lacey at [email protected].

This week we spoke with Sean Gallagher, a partner at Polsinelli who specializes in labor and employment law. Gallagher, a Fellow of the College of Labor and Employment Lawyers and a Colorado Super Lawyer, is also a First Amendment expert and has argued multiple cases before the Supreme Court of the United States. He is a graduate of Baylor University and the University of Denver’s Sturm College of Law.

Is binding judicial review of legislation and executive actions essential for a healthy democracy? Explain.

A: I believe that judicial review of legislative and executive actions is essential for a healthy democracy. That principle, as established in Marbury v. Madison, has been an essential cornerstone of our separation of powers since 1803. It has also been an important part of my practice over the years. For example, I am currently representing a tax protester on a pro bono basis in a matter that was referred to me by a federal judge. We are challenging the constitutionality of a new federal statute that allows the government to confiscate your passport if you owe back taxes, even if there is no showing that you are a flight risk or are hiding assets abroad. Absent the right to challenge the constitutionality of Congressional legislation, I fear that Congress would have the unchecked ability to draw all governmental powers into what Madison called its “impetuous vortex.”

Should non-lawyers be allowed to own an equity stake in law firms? Discuss.

A: ABA Model Rule 5.4 bars lawyers from sharing legal fees with non-lawyers and forbids lawyers from practicing in an enterprise in which a non-lawyer owns any interest. While critics may view this as an attempt by the legal profession to insulate itself from outside competition, I think it serves a very important purpose. American lawyers have a rich tradition of representing unpopular clients and causes that includes John Adams’ representation of British soldiers accused of killing five colonists in 1770. I have personally represented a number of clients over the years in controversial matters, and my firms have always supported me because they understood the important role that lawyers play in protecting civil liberties. I fear that if we allow law firms to be owned in whole or in part by people who are not bound by oaths we take as lawyers, we will surrender the decision of who gets legal representation to the bean counters.

Among all living movie actors, who should be considered the most accomplished and worthy of the most renown? Discuss.

A: I am a huge fan of Robert Redford. Not only has Redford delivered award-winning performances in films as an actor and director over the course of six decades, but his Sundance Film Festival has also served as an incubator for independent film distribution since 1978. He has also served as a voice for conservation in the West. But the primary reason that I love Robert Redford is that he took his profits from Butch Cassidy and the Sundance Kid and bought himself a ski area in Utah.  How cool is that?

Which band is better — The Beatles or the Rolling Stones? Explain.

A: I have been a huge fan of the Rolling Stones since I attended my first Stones concert in 1981 at the Cotton Bowl, with supporting acts ZZ Top and The Fabulous Thunderbirds. While The Beatles are probably the most influential rock ‘n roll band in history, no band has stood the test of time like the Rolling Stones. And after six decades, they plan to go back on the road again this fall.

You are given a choice of spending a week backpacking in a designated wilderness area in the Pacific Northwest or exploring museums in New York City. Which do you choose? Explain.

A: I am an avid alpine skier and mountain biker, so I would definitely choose to spend a week backpacking in the Pacific Northwest. While I do not want to diminish how amazing New York museums are, nothing compares to hiking in the shadow of Mount Rainier or Mount Hood. A few weeks ago, my wife and I stayed for several days at Flapjack Point on Puget Sound, and I would love to go back for a full week to do some serious backpacking.  “Not all who wander are lost.”