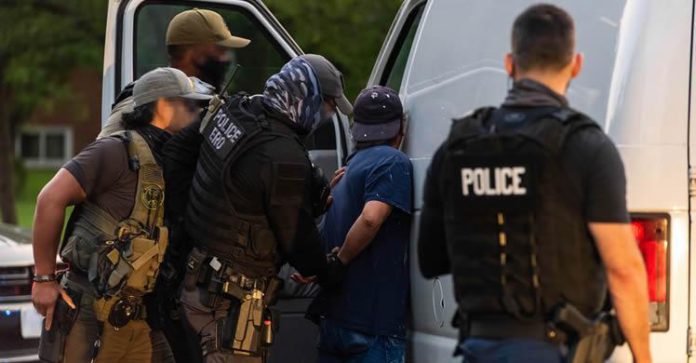 U.S. Immigration and Customs Enforcement arrested more than 2,000 people between July and August in a nationwide effort to detain undocumented immigrants with prior criminal convictions or charges. And while the announcement focuses on the nationwide crackdown, it also offers insight into the medical screening process of new intakes at detention centers around the country.

Executive Associate Director of Enforcement and Removal Operations Henry Lucero said that at the start of the pandemic, ICE announced that officers were given their own discretion in operations, focusing mainly on public safety threats and those subject to mandatory detention, while prioritizing public health. The March posture is still in effect, and the use of discretion will remain in effect until further notice.

ICE never stopped making arrests, and over the past 30 days, officers were asked to target those with previous convictions or charges for crimes with victims, Lucero said. During the operation, which began July 13 and ended Aug. 20, more than 2,000 people  were arrested — 85% of whom had past criminal convictions or charges. The 2,000 people detained by ICE during the period were not reflective of the entire number arrested by ICE, only the focused operation.

However, the remaining 15% potentially did not have criminal convictions or charges, “but all were in violation of immigration law,” Lucero said. That 15% were apprehended for a variety of reasons, Lucero said, and included people who had been ordered to leave the country and had not, and those previously deported and returned.

The operation started by focusing on those with domestic violence conviction charges due to the time spent at home as a response to COVID-19, he said. As the search continued, ICE expanded the search to include those with victim crime charges or convictions.

Lucero said these arrests are happening daily around the country, not solely during an “enforcement period.” During this operation, there were more officers “focused on arresting these at large criminals,” and although the operation is over, ICE will continue to arrest criminal aliens and other at-large criminal violators.

Further, the health of all involved — officers and immigrants — was a focus of the operation, he said.

During operations, ICE wears multiple pieces of PPE worn by ICE, including gloves, face shields, N95 masks and other equipment, and the same equipment is provided to those who are detained, according to Lucero.

Lucero also addressed how the arrests fit within the agency’s coronavirus response, which saw the population of detention centers around the country decreased by reviewing the cases of those in custody and  prioritizing those who would be apprehended and placed in detainment, Lucero said.

“We never said we were going to stop arresting individuals — we said we were going to prioritize and focus on those who are public safety threats,” Lucero said. He added that the discretion piece could mean that just because a personwas arrested did not mean they would be detained and ineligible for bond or release.

In releasing individuals from detention, Lucero said ICE officers reviewed the medical and criminal histories of those in detention  to determine who might be eligible for release. He said the agency prioritized cases of anyone age 60 or older.

A little over 900 people  were released, who were not subject to mandatory detention, who  had chronic healthcare history and deemed not to be public safety or flight risk, Lucero said. And some who were flight risks were given ankle monitors to ensure compliance.

At the time of the call, approximately 29,000 people had been COVID tested in ICE facilities around the country, and voluntary testing continues, Lucero said.

He was unaware of any ICE officers who contracted COVID as a result of this operation. As of Sept. 3, the total detainment population nationwide sat at 20,713, with 841 of those testing positive for COVID. These people are housed in separate quarters to help curb spread, according to the ICE website.

Over 200,000 medical screenings were provided to detainees, and additionally follow-up treatment in FY 2019, and over 1,600 health professionals made up the ICE Health Service Corps (IHSC) workforce which operated and managed the healthcare system in the country.

Since the start of the pandemic, COVID-19 screenings based on exposure history and symptoms, and in accordance with CDC guidelines, have taken place. Within two weeks, a physical examination with vision screening takes place, as well as mental health screenings.

Follow-up assessments for acute and chronic conditions and medication therapy takes place. Problem-focused dental screenings and behavioral health referrals are made within that timeframe, according to ICE.