The latest judicial decision in a case involving blueprints to make plastic guns using a 3D printer has added another layer to an already intricate legal matter.

On Aug. 27, Judge Robert Lasnik, a district court judge in the Western District of Washington in Seattle, granted a preliminary injunction in a multiparty lawsuit spearheaded by the Washington attorney general. The case sought to prevent Defense Distributed, a private Texas-based company, from posting online computer aided design files, or CAD files, that would allow anyone with a commercially available 3D printer to print guns and gun parts. Eighteen other states including Colorado joined the lawsuit.

Although the owner of Defense Distributed, Cody Wilson, has notably argued his First Amendment rights allow him to post these design files online, the Washington State lawsuit does not specifically address that constitutional conundrum. Rather, the suit pertains to a question of whether a settlement reached by the Justice Department and Defense Distributed in a previous case out of Texas violated the Administrative Procedure Act.

In his opinion, Lasnik noted “Whether or not the First Amendment precludes the federal government from regulating the publication of technical data under the authority granted by the [Arms Export Control Act] is not relevant to the merits of the APA claims plaintiffs assert in this litigation. … The State Department has not attempted to justify its action as compelled by the First Amendment, nor have the private defendants shown that their First Amendment interests are a defense to or otherwise validate plaintiff’s claims against the federal defendants.”

The question before the judge in this case was an allegation made by the plaintiffs that an APA violation occurred because the Justice Department failed to provide a required 30-day notice to Congress before making a change to the United States Munitions List — in this case removing the 3D-printed gun CAD files from the list per a settlement reached between Defense Distributed and the Department of Justice. 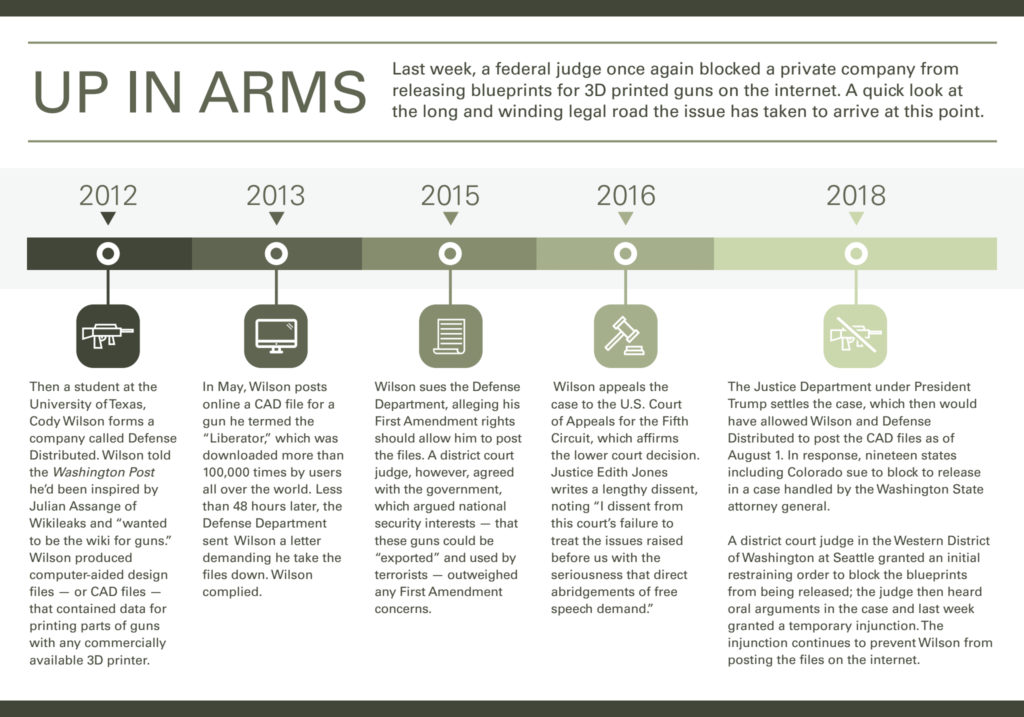 In ruling on the injunction, Lasnik found, among other factors, there was a good chance the state of Washington would prevail. “Plaintiffs have shown a likelihood of success on the merits of their APA claim because the temporary modification of the USML to allow immediate publication of the previously-regulated CAD files constitutes the removal of one or more items from the USML without the required Congressional notice.”

“The APA violation was a very easy merits argument to look at and decide on,” said Regina Drexler, of counsel at Ireland Stapleton Pryor & Pascoe who deals with intellectual property law. “The statute requires 30-day notice and the government didn’t provide the requisite notice.”

However, near the end of his 25-page decision, the judge also dropped an important line that altered the immediate fate of Wilson’s designs. Lasnik noted that, although in this case the Arms Export Control Act prohibited Defense Distributed from uploading the files to the internet, the files could be “emailed, mailed, securely transmitted, or otherwise published within the United States.” The important difference being that uploading the files to the internet extends the information to an international audience.

Given that part of the decision, last week Wilson said he intended to do just that — email the files — and that he’d quickly received about 400 orders. In an interview aired on CBS, Wilson said he was sending out the files because “It’s a matter of principle.”

Although not critical to the particular question of an APA violation, the judge did briefly opine on some of the potential First Amendment questions near the end of his ruling.

“The First Amendment argument raises a number of challenging issues. Is computer code speech? If yes, is it protected under the First Amendment? To answer those questions, one would have to determine what the nature of the files at issue here is: Are they written and designed to interact solely with a computer in the absence of the intercession of the mind or will of the recipient or is it an expressive means for the exchange of information regarding computer programming and/or weapons manufacturing?”

Lasnik added, “The court declines to wade through these issues based on the limited record before it and instead presumes that the private defendants have a First Amendment right to disseminate the CAD files. … The Court finds that the irreparable burdens on the private defendant’s First Amendment rights are dwarfed by the irreparable harms the States are likely to suffer if the existing restrictions are withdrawn and that, overall, the public interest strongly supports maintaining the status quo through the pendency of this litigation.”

That last sentence in particular, Drexler said “begs to be analyzed.” “But,” she said, “it’s not particularly related to the issue at hand in terms of the procedures act; maybe if it was, it would get more analysis, but the judge basically says I’m not going to worry about these issues.”

The origin of this fight dates back to 2012. Wilson briefly released CAD files to make guns such as a pistol known as the “Liberator” and frames for an AR-15 semi-automatic rifle. During Barack Obama’s presidency, the State Department sued to block Wilson from posting the CAD files by including the files on the United States Munitions List, making them subject to violations under International Traffic and Arms Regulations.

Wilson took down the files, but later sued and argued his First and Second Amendment rights to free speech and to bear arms allowed him to release blueprints.

The lawsuit proceeded for several years until the Trump administration somewhat abruptly settled the case in June. In July, The New York Times reported details of the settlement. According to the Times report, the settlement allowed Wilson the freedom to publish his files in any form beginning August 1 and included an agreement on the government’s part to pay $40,000 of Wilson’s legal fees. That’s when Washington and the other states stepped in, attempting to block the August 1 release by arguing on more technical grounds.

Judge Lasnik’s preliminary injunction will remain in place until the case is resolved.