Colorado transportation projects will finally see a bump in funding after a contentious fight over the last few years in the state legislature. After an uphill battle in the House of Representatives for most of the legislative session, Senate Bill 1 passed the Senate with amendments late Tuesday evening, right before the last day of the session.

“When was the last time that happened? It went through more of a ringer in the House after the fact as we all know, but the bipartisan nature of some of these pieces of legislation — we’re pretty pleased with how things went,” Grantham said at a press briefing Thursday.

The Colorado Department of Transportation has estimated about $9 billion in unfunded projects throughout the state. The bipartisan agreement sets aside $495 million to fund transportation projects from the 2018-2019 state budget and $150 million from next year’s fund. The bill also commits $50 million a year after that for the next 20 years.

“We have said from the beginning of the session that transportation is a top priority for the House Democrats, and this proposal delivers without putting education spending at risk,” House Speaker Crisanta Duran said in a press release last week. “For years, the issue of transportation funding has been a challenge for the legislature. This year we have a solution.”

One sticking point over the course of the session was a disagreement between the major parties on how that $645 million should be spent. Democrats pushed back on previous Republican funding proposals earlier in the session because they didn’t include “multimodal transportation options” for a comprehensive system which include public transit, mobility solutions for seniors, individuals with disabilities and routes to school for children. SB 1 splits up the $645 million three ways: 70 percent for CDOT projects, 15 percent for local infrastructure and 15 percent for multimodal projects.

The bill stipulates that if no citizen-initiated transportation funding measure makes it onto the November 2018 ballot, or if one — or multiple — does and they are rejected, the state is authorized to issue a ballot question to voters in 2019 asking them to approve transportation revenue bonds for critical projects. The 2019 measure would not increase taxes. 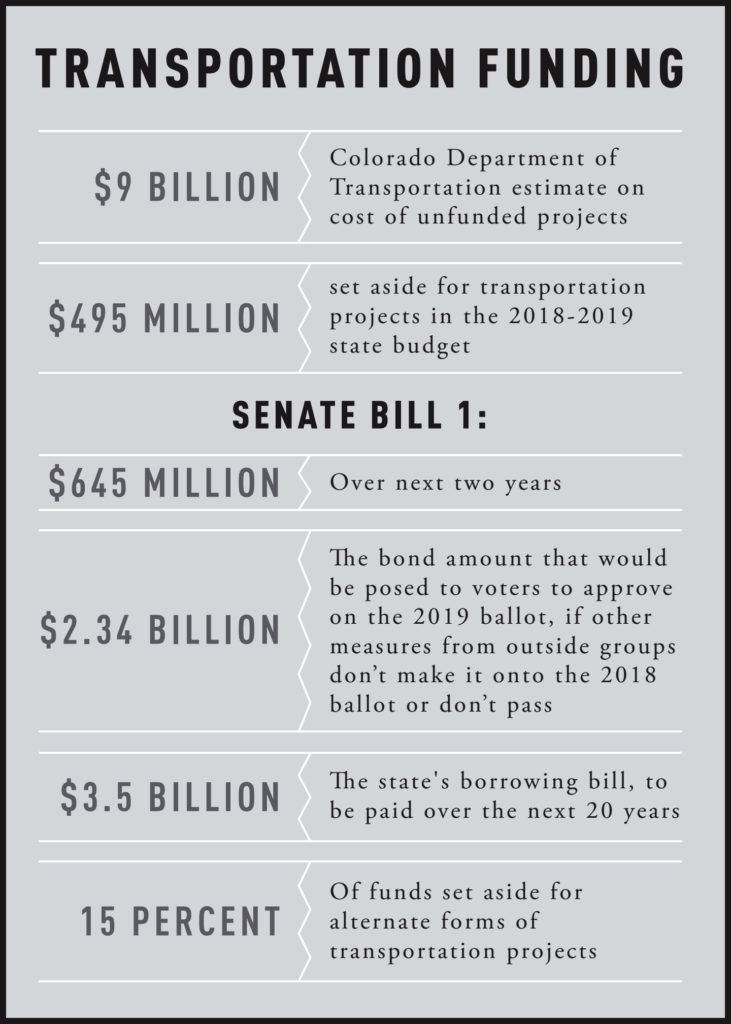 “That’s the biggest moves in road funding we’ve seen since Owens was in office, it might even be bigger than the ones they accomplished,” Grantham said. “If we’re able to pass a bonding measure — the reality is with $650 million dollars of general fund money going into transportation in 18-19 and 19-20, that’s nothing to sneeze at. That’s a big victory for us, it’s a huge victory.”

The “Fix Our Damn Roads” measure, backed by the libertarian-leaning Independence Institute, was approved earlier this month by the Secretary of State. If the initiative collects enough signatures by August 6, it will be on its way to voters in November. The measure would require CDOT to issue revenue anticipation notes — a maximum of $3.5 billion dollars with a maximum repayment cost of $5.2 billion — and would also require CDOT to use the proceeds for specific transportation projects.

If that doesn’t pass, SB 1 would put forth a ballot initiative in 2019, asking voters to approve a $2.34 billion bond package, and the $50 million per year will go toward paying that off.

“I like the legislature being forced to prioritize something that benefits all of Colorado and is a core function of government — and that’s our infrastructure,” Grantham said. When asked if he supported the proposed initiative, Grantham said he will probably vote for it if the measure makes it onto the ballot.

COPs, or Certificates of Participation, are a lease-financing mechanism that have helped to close the transportation funding gap over the years in Colorado. The government has been able to use them without voter approval to get around TABOR since the agreement can be terminated at any point and don’t involve a multi-year fiscal obligation. In 2008, roughly $230 million COPs funded 12 public projects, and $340 million went to funding a new justice center and history museum in 2009. From 1999 to 2004, CDOT issued $1.487 billion in bonds to fund transportation projects.