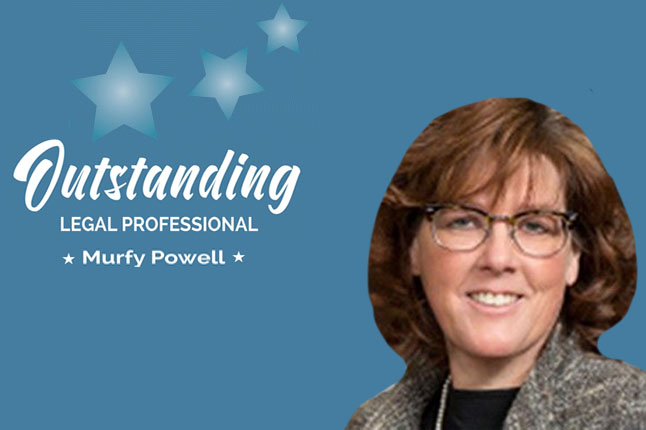 Murfy Powell’s coworkers at Wheeler Trigg O’Donnell describe her in heroic terms: She’s a “legendary” cyber-sleuth, a “rock star” with “paralegal ESP,” a sixth sense about attorneys’ needs and a willingness to endure long hours and travel.

Powell is modest when accepting the praise. Yes, she says, she occasionally sleeps on an air mattress at the office during busy periods or important trials, but sometimes that’s easier than making the 40-plus-mile commute to her home in Johnstown. (According to the firm, WTO would pay for a hotel room, but Powell has refused.)

She goes the extra mile to uncover key evidence that can, in the words of one attorney, “completely change the direction of a case.” In one case, she helped win summary judgment for a client after finding social media posts that discredited the other side’s claims. But she says it’s just another part of her duty to clients. Plus, she enjoys doing the extra digging.

“It’s kind of like putting together a puzzle, and I’ve always been somebody that likes to put together puzzles,” said Powell, who works on product liability cases for clients such as Ford, Michelin and Chrysler as well as medical malpractice cases. While there’s “really no typical day in litigation,” she said, her duties include assisting attorneys with investigation and discovery, coordinating depositions and document production, preparing pleadings and organizing files.

Powell joined the firm in 2005 after working with WTO attorneys during her time as a paralegal at a West Virginia firm that served as local counsel for Ford. She had lived in Colorado as a child and wanted to move back, so when she was ready to move west, she called WTO partner Ed Stewart to see if the firm was hiring.

“He said, ‘You just tell me when you want to start, and we’ll have a job ready for you,’” Powell said. A WTO attorney said in Powell’s nomination form that the firm had been “recruiting her for years due to her strong commitment to excellence and client service.”

“It’s the small things that make a difference,” Powell said, describing he approach to life in and out of the office. “And for me, it’s a connection to people through food.”

Her nomination noted she makes it a point to learn her clients’ favorite foods. “When she heard that a certain client liked birthday cake, she brought a piece when she picked him up at the airport,” one attorney said. “He loved it so much that she has made sure since to always have a piece of cake waiting for him.”

“These small gestures of thoughtfulness harken back to her ability to anticipate others’ needs. Sometimes a piece of cake makes all the difference in reminding someone that you’re tuned in to them.”

She has also bonded with coworkers over food. While working late nights alongside attorneys, Powell boosted morale with meals and snacks during a difficult trial in Florida a few years ago, even cooking homemade meals in her hotel room.

Powell’s passion for making and sharing food dates back to childhood, having grown up in a family of cooks in West Virginia.

She started selling homemade cookies, pies and cinnamon rolls at a friend’s pumpkin patch last fall after obtaining her cottage bakery permit, but her entrepreneurial efforts took a backseat to charity during Christmas, when she channeled her baking skills into a campaign called “Rolled and Mugged” to deliver cinnamon rolls and coffee to people struggling during the holidays.

While Christmas is the “most anticipated day of the year” for many, Powell said, “it also can be the most lonely and devastating day.” About six weeks before the holiday, she started organizing her neighbors in Johnstown through the Nextdoor app to volunteer, and some of her WTO colleagues joined the effort. They made 175 pans of cinnamon rolls — so many that Powell had to buy an extra freezer to store them — and she convinced a local coffee shop and supermarket to donate coffee and chocolate milk for the campaign.

She asked people at the post office, medical clinics and businesses to anonymously nominate people who would be alone or struggling during the holiday. She and nearly 40 volunteers delivered the treats to hundreds of people on Christmas morning.

Some of the recipients had lost a child or were newly widowed or divorced, and others were dealing with medical crises or catastrophic injuries.

“At the end of the day, did it solve their money problems? No. There’s still an empty chair at their table. There’s still pain. But for a moment, it was making them feel loved,” she said.

Powell knows firsthand how much small acts of kindness can mean to someone who is suffering. In 2018, while in the middle of a difficult divorce, Powell was diagnosed with a malignant tumor on her liver and was told she would need a transplant.

But three months after her diagnosis, she was told the tumor was gone — a fact that left her doctors “baffled” but was confirmed over the next few months by MRIs, CT scans and lab results.

“It’s my miracle,” she said. What helped her through that difficult time, she said, were the daily messages from family, friends and coworkers letting her know she wasn’t alone. Those small acts of kindness inspired her to start Rolled and Mugged, which she plans to make an annual event.

“When it comes to community service, Murfy doesn’t just go the extra mile, she goes the extra ten,” the nomination said. “In all her volunteer efforts, Murfy is fiercely committed to serving her whole community, but in a way that makes people feel singularly appreciated.”

Her other recent volunteer work has included making cloth masks and care packages for frontline hospital workers in Greeley, as well as preparing sewing kits for friends and coworkers so they can join in the mask-making efforts.

She has also prepared meals and delivered groceries for elderly neighbors during the pandemic.

Powell has participated in the WTO Foundation’s volunteer initiative with The Gathering Place, a daytime shelter in Denver for women, children and transgender people struggling with homelessness and poverty. The firm started providing hot breakfasts once a month, and Powell came up with the idea to model the dining experience after a restaurant complete with menus, coat checks and volunteer waitstaff. “It was a way of making them feel served,” she said. “We’re all human, we like to be spoiled occasionally.”

“I believe I was given a second chance at this journey called life, and I feel a responsibility to bring smiles to people during difficult times,” Powell said. “I have heard it said that ‘when you have more than you need, build a longer table and not a higher fence.’”

She added that “2020 has been a reminder that fences must come down, and conversations at the table can reveal we have more in common than we think.”