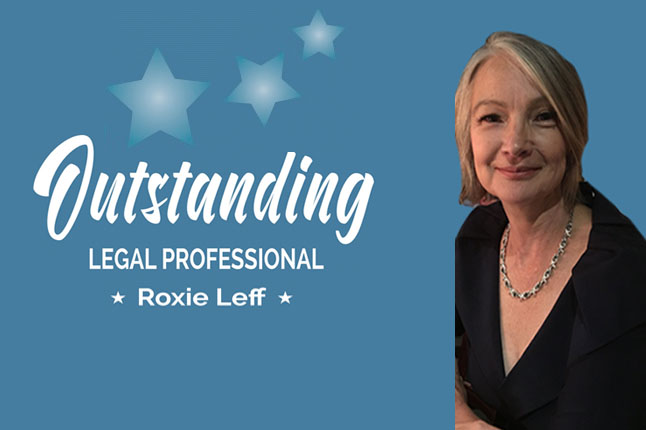 Roxie Leff isn’t used to being in the spotlight.

But last April, after being part of the trial team that helped win a trial outcome for a California company that might have otherwise had to close, she was brought with the trial attorneys to the front of a companywide employee retreat and given a standing ovation for their efforts.

“I’m pretty low key. I hate attention,” Leff said “But that was cool.”

Even her evaluation of the event seems to play it coy . She said that even the attorneys who present a case to a judge and jury might have a hard time knowing what kind of impact they have on their clients. But after receiving that kind of attention, she said she knew she helped make a difference.

The Moye White trial paralegal has been working in law firms for 32 years, and that moment was the first time — and she figures maybe the last time — that kind of celebration might happen.

And regardless of whether she receives recognition for her efforts in a trial, it’s been some time since she’s seen a trial at all. So far, 2020 has been a wholly different year from last year. Cases are still moving forward, despite the pandemic, but trials aren’t being held right now. And that can be particularly tough for trial lawyers and trial paralegals alike.

“In January, I had five or six trials scheduled through August,” Leff said. Those trials have obviously not gone forward as planned. “Everyone is going stir crazy.”

Even still, she said she’s been staying busy with litigation through the pandemic. Her work as a paralegal involves lots of pretrial work — discovery, depositions, briefings, e-discovery. And she says that work hasn’t slowed down. That busy schedule and variety of work was what drew her to working as a paralegal in the first place.

She said she got into the field while working at a public relations firm in Washington, D.C. The staff paralegal seemed to have interesting work, she said, and she was connected with a recruiter who got her a position at a law firm in 1987. She said she’s stayed in her career since then in large part due to the variety of the work — litigation can involve companies in any industry, and she gets to stay plugged into all the different issues and laws within those areas.

The Moye White attorneys she works acknowledge her skill in staying up to date in all of those areas as well. Her Outstanding Legal Professionals nomination noted that “One of the most difficult parts of practicing law is knowing each client’s business and industry in depth. … Roxie does this effortlessly. She’s able to converse with our clients as if she works in-house.”

She said she might have a knack for that simply due to her curiosity, attention to detail and rapport with clients. She recognizes how daunting litigation can be — especially if it ends in a trial — and building a relationship with clients makes it easier on all parties.

“It’s key to get involved in a case early on and build a rapport with a client,” she said. “Sometimes it’s overwhelming to say, ‘we need every email you’ve ever done over five years.’ So you start broad, and they feel comfortable if we can make it easy for them to get through that process. And you build from there.”

In one trial last year, Leff’s ability to build a rapport with a client paid off in a direct way.

Moye White attorneys went to trial in a business dispute, and the attorneys were concerned that the client’s wife might jump in and vocally disagree with what the opposition was saying about her husband and his conduct. In a courtroom, the first rule is to stay stony-faced, and to not react, Leff said.

“I didn’t know her as well as I knew our client until we got to trial, but I quickly was able to build a relationship with her, and we got to know each other pretty well.”

The attorney involved said her ability to build that relationship during a trial helped win that case. “It was just another reason we need to give Roxie hazard pay,” he wrote.

For Leff, those moments where she’s in trial seem to fuel her passion for the job. “Trials are labor-intensive,” she said. “There are long nights, and it’s physical work just moving paper and technology to court. But when you hear attorneys do their thing, you feel more like part of the team.”