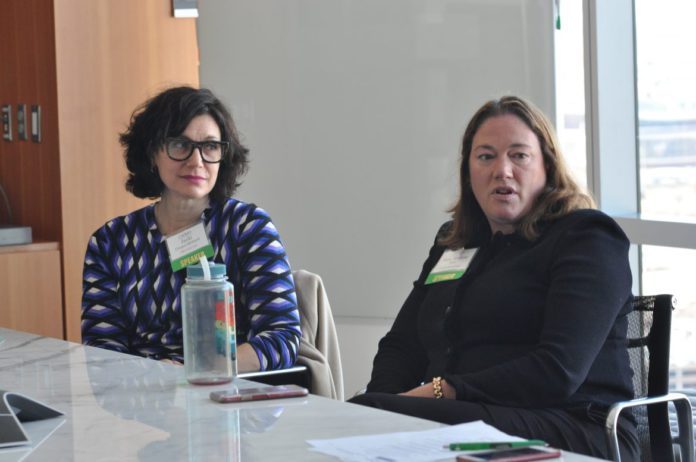 A crowd of mostly women packed a big conference room at Polsinelli on Feb. 26 to learn what it takes to become a judge. Some had serious judicial ambitions while others were just casually curious about the application and nomination process.

“Storming the Bench,” a Colorado Women’s Bar Association event, aimed to encourage more women, people of color and members of other underrepresented groups to apply for judgeships. But one point the panelists drove home was that most who apply will never don the black robe. That shouldn’t dissuade anybody though, according to the speakers.

“If this is what you want to do, you have to just keep trying,” said Colorado Supreme Court Justice Melissa Hart during a breakout session on endorsements and interviewing with the Governor’s Office.

During the keynote speech, Jacki Cooper Melmed, chief legal counsel for Gov. Jared Polis, made similar remarks. “Chances are you won’t get the spot, but keep trying anyway,” she said. In the meantime, she added, it’s important to encourage diversity at all stages of the pipeline, from law schools to judicial nominating commissions.

Cooper Melmed said that, for many citizens, a traffic ticket or small claims civil action in county court is the only interaction they’ll have with the government, “and we want that government to serve them and to serve them well.” When people see themselves represented on the bench, she said, it gives them more faith in the fairness of our institutions.

After the keynote address, participants broke into groups for a series of interactive sessions featuring what CWBA Programs Committee Co-Chair Hannah Westmont called “a dream team of panelists.” Panelists included judges, magistrates and attorneys involved in the judicial nominating process.

During the small group sessions, several pieces of advice came up again and again. One was the importance of being able to answer the question: “Why do you want to be a judge?”

Several panelists said attorneys often view a judicial appointment as the capstone to a long legal career or a place to semi-retire from the stresses of private practice. That’s not an answer that will impress a nominating commission.

“It’s not a soft place to land,” said 17th Judicial District Chief Judge Emily Anderson. “It’s one of the most challenging jobs I ever imagined.”

Just as important as having a good reason for wanting to be a judge is picking the right cases to list on Question 16 of the application form, which asks for five litigated cases and contact information for the judge and opposing counsel.

“Question 16 does a lot for us,” said Cooper Melmed. It gives the nominating commission more people to call, for starters. And, as several panelists pointed out, they do call. Applicants should pick cases where the judge and opposing counsel have nice things to say.

A lot of lawyers want to list cases they won, said 2nd Judicial District Judge Nikea Bland, but the more contentious cases might not be the best if an applicant didn’t leave a good impression. Panelists recommended listing cases that tell a story about a teaching moment or that show off breadth of experience.

Would-be judges should demonstrate a genuine commitment to service. It’s important to serve on committees and legal organizations, several panelists said, but just listing an alphabet soup of affiliations — from the DBA to the CTLA to APABA — isn’t enough if it doesn’t come across as authentic or tell the commissioners anything.

Showing community involvement outside the legal industry is also important, whether it’s as part of a religious group, volunteering with a school or playing in an orchestra. “Pick something you’re passionate about,” said 8th Judicial District Judge Susan Blanco. “There’s not a recipe to this.”

Applicants shouldn’t shy away from listing activities from several years ago, said 17th Judicial District Judge Rayna Gokli McIntyre. “It shows your commitment to service didn’t start when you became interested in being a judge,” she added.

As with getting any job, networking is key. Several speakers noted that women are more reluctant to leverage their networks, even though most people are happy to go to bat for a friend or colleague.

“As women, we have a hard time promoting ourselves,” said Lathrop Gage partner Alison Zinn, who has served on judicial nominating commissions. “So, have someone else to promote you.”

Finally, don’t get discouraged. “It is a weird alchemy every single time,” said Cooper Melmed, adding the applicant pool, commissioners and needs of each court change from opening to opening.