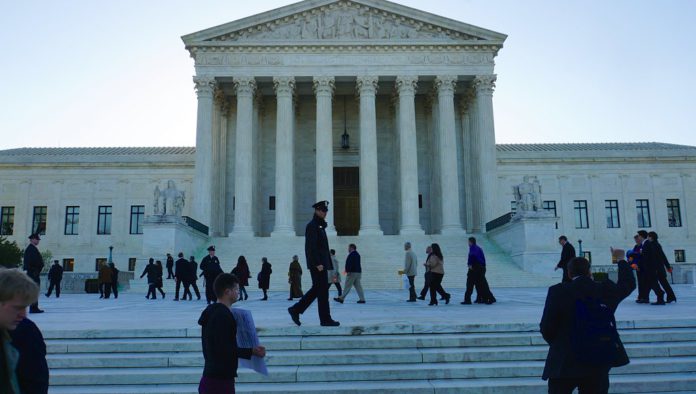 Two jurisdictions have split over whether the Constitution requires electors to vote for the presidential nominee of their political party, but it’s not a clash between two federal appeals courts. The 10th Circuit Court of Appeals and the Washington Supreme Court have split over the issue, and now lawyers in the case out of Washington have asked the U.S. Supreme Court to resolve the conflict and rule electors’ votes aren’t bound by their political party.

At the heart of the two cases is the authority the Constitution gives to states to appoint presidential electors in any way they choose, but the Constitution doesn’t clearly give states power to remove electors.

In August, the 10th Circuit decided in Baca v. Colorado Department of State that states can’t void votes of presidential electors who split from voting for their political party’s candidate. The state removed elector Micheal Baca and voided his vote after he cast his vote for John Kasich instead of Hilary Clinton in the 2016 election. Fellow electors Polly Baca and Robert Nemanich said the state’s removal of Micheal Baca chilled them from also doing so, and the three sued the Colorado Department of State. Then-Secretary of State Wayne Williams warned electors they could be charged with perjury if they did not cast their votes according to state law. Baca was ultimately not prosecuted.

In the case that ultimately went to Washington’s Supreme Court, Chiafalo et al v. State of Washington, three electors voted for Colin Powell for president. Unlike in Colorado, their votes were counted. The Washington Secretary of State fined the three electors $1,000 each. An administrative law judge and the Thurston County Superior Court upheld the fines.

“The decisions of the Washington Supreme Court and the Tenth Circuit are opposed on every material point,” writes Harvard law professor Lawrence Lessig in the petition. For one point, he writes, the two courts disagree about whether the previous Supreme Court case Ray v. Blair totally resolves the question of elector freedom.

The Supreme Court in that case decided states do have the authority to require electors to pledge their votes to their party’s nominee. But the court noted those promises may be legally unenforceable, according to the petition, because they could violate an assumed constitutional freedom of electors to vote how they choose.

According to the petition, the Washington Supreme Court read the Ray decision as giving broad authority to hamstring elector freedom. But the 10th Circuit interpreted the decision narrowly. The court said the precedent doesn’t address restrictions on electors after they are appointed, or actions taken against faithless electors.

Sherman & Howard member Chris Jackson said the upshot of the petition’s argument for why the Supreme Court should take the case is straightforward: The court will have a much better chance to make a thorough decision if it does it well before the country is in the throes of a presidential election.

“If the outcome of the electoral college would turn on whether electors have the discretion to vote for whoever they want to, it would be really bad for that issue to come up right after the election,” Jackson said. “It would be much better if the Supreme Court, as the court of last resort, had decided months in advance [that] this is the way the game is going to be played.”

Jackson said he believes that makes the case a good vehicle for the Supreme Court to decide the issue of faithless electors.

But the petition disagrees with the 10th Circuit’s analysis that Colorado’s removal of Baca makes the case materially different from the Washington case. The court saw a different question in Colorado’s case: Whether a state can remove an elector or void their vote after voting.

“The particular enforcement mechanism — a fine in Washington and elector removal in Colorado — is constitutionally irrelevant. The question in both cases is state power, and each case renders state power differently,” writes Lessig. He added electors aren’t free to perform their federal function if they are subject to a fine.

Jackson said reading the two cases consistently could theoretically leave room for the Supreme Court to make a narrow decision about which types of conditions of electors’ appointment states have authority to impose without making a bright-line decision about whether electors are bound by their political party. The court could decide, for example, that the Constitution doesn’t allow states to remove electors for deviating but that they can penalize electors in other ways, such as fining them.

But he added he doubts the Supreme Court would go that route, because trying analyze which types of penalties are constitutional would probably create more confusion than it clears up.

“If the Supreme Court is going to take this up and wants to resolve this issue in advance of the 2020 election, my personal view is drawing very difficult-to-see lines between what sorts of penalties are O.K. is probably not the right thing to do, because it would just make it more confusing, especially to the general public.”