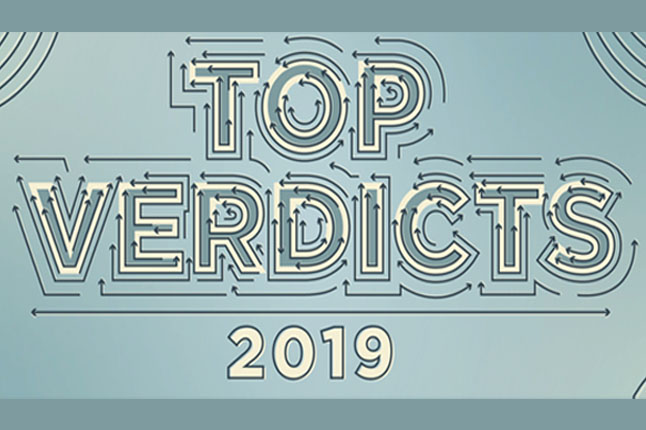 The top verdicts for 2019 include a breach of contract dispute between two oil and gas companies and two large personal injury verdicts. The top three biggest jury awards of 2019 were shared with Law Week by Jury Verdict Reporter of Colorado.

The following case information was provided by Jury Verdict Reporter with some additional reporting by Law Week. The amounts listed here reflect jury awards only and not final judgments that might have been altered by post-trial motions, appeals, damages caps or post-trial settlements.

Antero also sought declaratory relief and Antero asserted the affirmative defense of equitable estoppel during trial, the parties agreed that the equitable claims and defenses should be determined by the court rather than the jury.

Antero Resources Corporation, with headquarters in Denver, is an independent oil and gas company exploration and production company. Antero produces oil and natural gas in West Virginia and Ohio.

Mike Gallagher, a partner at Davis Graham & Stubbs who led the trial team, said the dispute, at its core, was that Antero believed it fulfilled its obligations by delivering the requested gas while Washington Gas said the contract wasn’t fulfilled and that it was damaged instead. Washington had pursued, and lost, a claim for $40 million. Gallagher said the contracts at the time they were made, were believed to be among the largest in the country.

“This case was an interesting example of something I see a lot of … The client put the teams together,” Gallagher said. He said it was a complicated case with a long procedural history.

For the plaintiff Antero Resources Corp. and against defendant Washington Gas Light Co. on Antero’s breach of contract claim, $8,325,727.

For the plaintiff Antero Resources Corp. and against defendant WGL Midstream on Antero’s breach of contract claim, $81,382,254.

For Antero and against the defendants on Antero’s claim of breach of contract for short-paying invoices:

On Jan. 27, 2017, at approximately 4:30 p.m., Gary Suydam was riding his bicycle home from work. He rode in a bike lane on West 26th Avenue and was crossing Wadsworth Boulevard with a green light.

Chelsea Brewer made a left turn in front of Suydam and crashed into him and knocked him off his bike. He was then run over by a vehicle driven by Steven Tecmire, a designated non-party who left the scene and was identified later.

Suydam suffered a spinal injury and had surgery to stabilize his spinal cord. He was 51 years old at the time of the collision and is now permanently paralyzed. His past medical expenses were $1.732 million, and he claimed future medical expenses of 12,507,500. His past lost earnings were $78,000, and he claimed future earnings losses of $1,192,900 and a total economic loss of 15,708,368 including life care expenses. Suydam also claimed permanent impairment and disfigurement.

The plaintiffs claimed that Brewer took the right-of-way and caused the collision with the plaintiff bicyclist. They claimed their injuries and damages were caused by the actions of Chelsea Brewer and that she was within the course and scope of her employment with LFI Fort Pierce when the collision occurred.

The defendants contested whether Chelsea Brewer was acting within the course and scope of her employment with LFI when the collision occurred.

The defendants designated Steven Tecmire, who is now in prison, as a non-party and defendants argued that he was responsible for Suydam’s injuries.

The jury ultimately found LSI and Brewer 90% at fault and assigned 10% of the fault to Tecmire. After applying statutory interest and non-economic loss of consortium damages, the court entered judgment for the plaintiff for $52,672,899.12.

Verdict: For the plaintiff Gary Suydam and against the defendants:

For the plaintiff Lisa Suydam on her loss of consortium

Type of Claim: Personal injuries and wrongful deaths resulting from a rear-end auto collision and claim by the decedents’ Estates for medical expenses.

On the afternoon of June 30, 2017, Jill and Michael Walters and their two children, Nicole and Walters, were stopped in their 2013 GMC Yukon on I-76 after a spill of fly ash. Mark Bollinger rear-ended the plaintiffs’ vehicle at a high speed, and Michael Walters, 54, died shortly after the collision, and Jill Walters, 50, died three weeks later.

The plaintiffs sought damages under three claims: for injuries that Nicole and Nichols Walters suffered — Nicholas Walters sustained three pelvic fractures, Nicole Walters claimed a neck injury, and they both alleged they developed PTSD as a result of the collision; for the wrongful deaths of their parents; and a claim by the Estates of Jill and Michael Walters for medical expenses from the time of the collision to their deaths.

Bollinger admitted liability but disputed the nature and extent of damages claimed. He said he did not think he fell asleep at the wheel but said he admitted at the scene that he may have been too tired to drive. CWRV Transport denied that Bollinger was its agent and said he was an independent contractor who was not performing any services for the defendant at the time of the collision. CWRV Transport denied it owed any damages and disputed the amount of damages claimed.

In comments to Law Week in October, Caplis and Waheed described their trial strategy to demonstrate that Bollinger was acting on behalf of CWRV Transport at the time of the collision by detailing how he had been following the company’s policies and handbook.

After the plaintiffs settled with Loren Carwin, the defendants designated him as a non-party. The defendants claimed Carwin was negligent for causing the fly ash spill that caused traffic to stop on I-76, and claimed his negligence was a cause of the rear-end collision between the plaintiffs’ vehicle and Bollinger’s pickup truck.

The jury found that defendant Mark Bollinger was an agent of defendant CWRV Transport, LLC, and was acting within the scope of his agency at the time of the collision. The jury assigned 95% negligence to Bollinger and 5% negligence to non-party Loren Carwin.

In addition to the case against Bollinger and CWRV Transport, the plaintiffs also sought a settlement with the driver of the truck that had created the spill that stopped traffic and led to the crash. Caplis said they received a settlement for foreseeability and causation under state law.

Caplis said Nicholas and Nicole are planning on using the size of the verdict and their experiences to call attention to fatigued driving. He said they plan to speak to industry groups and public service clubs on the issue.

Verdict: For the plaintiff Nicole Walters on her negligence claim:

For Nicholas Walters on his negligence claim:

For the plaintiffs on the claim of wrongful death of Michael Walters:

For the plaintiffs on the claim of wrongful death of Jill Walters:

For the plaintiffs Nicole and Nicholas Walters on the claim for economic losses arising from the deaths of Michael and Jill and Walters: