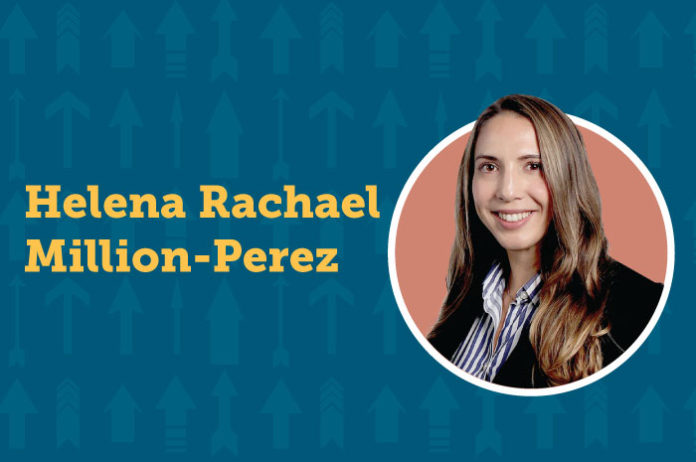 H. Rachael Million-Perez said her pathway to the law was formed by her mother, who would tell her argumentative daughter when she was small that she ought to become a lawyer when she tired of an argument.

“I think that trait of wanting to prove people wrong when I think that there’s a right and just answer is just kind of a part of who I am,” Million-Perez said. This same belief has propelled her through her many successes both inside and out of law and to stand up for what she believes in.

When looking at her resume — which highlights her research in Israel, holding multiple clerkships, publishing articles in legal publications, mentoring law students, taking on cases and doing plenty of pro bono and community interests — Million-Perez said she can feel like she forgets all the things she has accomplished. She tends to focus on the jobs at hand and the puzzles that need to be put together.

Million-Perez‘s interest in the law is wide and varied in both patents and trade secrets, but in pro bono work ranging from immigration cases to medical organizations in Targeted Regulation of Abortion Providers laws. Her history in clerking alone ranges from serving as a judicialand then patent law clerk, judicial intern for the U.S. Court of Appeals in the Federal Circuit, the Office of General Counsel at the International Trade Commission and Colorado Supreme Court.

“There is just so much law out there,” she said. Her clerkships helped expose her to law she didn’t know existed and to show the diversity of law. “The best part of law, for me, is really understanding the nitty-gritty little facts that create law that you want for your client — that is very exciting.”

She said finding that one document or piece of case law that helps put the puzzle together of making a case stronger was a very intriguing part of the profession.

For her, patent law provides her with a puzzle needing to be pieced together to create a successful case.

“Maybe I should just pick up puzzles instead of doing them for a job,” she said with a laugh. “But I get to do it every day, and I really, really like that part.”

One major case Million-Perez had a hand in surrounded the drug Herceptin, approved to treat certain types of gastric and breast cancer. She represented the company Genentech, owner of the drug, in biosimilar patent litigation over the drug.

Another company was attempting to enter the market prior to when the patents on Herceptin expired, she said. This resulted in a patent infringement suit brought against them. She added she believes in Herceptin’s ability to help women across the globe in treatment.

She admitted she has always wanted to work on a biologic drug case due to her background in science, and the scientific complexity of the drugs. The case was enjoyable to work on and empowering to speak with scientists about the pathway from idea to creation and represent a company that has worked to bring these drugs to the market.

The case resolved through a settlement and was significant due to the breadth, patent portfolio at stake and legal issues raised in respect to the Biologics Price Competition and Innovation Act of 2009, according to WilmerHale.

Part of her interest in scientific matters comes from her career before the law. She believes that the same trait of wanting to prove she is right was what led her into biochemistry work. After cold emailing labs across the globe, she was offered a position with the Bar-Ilan University in Israel. She spent a year working on male fertility and manipulating sperm cells to influence male fertility.

Million-Perez has also represented the American College of Obstetricians and Gynecologists in filings with the 6th Circuit in support of finding Targeted Regulation of Abortion Provider laws in Kentucky unconstitutional.

She says she definitely feels that is a one-of-a-kind pre-law history.

In her community work, Million-Perez is involved in the Colorado Hispanic Bar Association, where she serves as a co-chair of several committees within the group. One of her favorite areas to work within the bar is in professional advancement and trying to find Colorado lawyers needing to be held up and recognized for the work they do that often goes unnoticed, she said.

“It’s about propelling the community forward,” Million-Perez said. Whether that is the community of Coloradan Hispanic attorneys or Central or South American individuals.

She also serves as the co-chair of the Latinx Diversity affinity group at her firm, where she helps connect the many different Hispanic or Latinx attorneys within the firm and help them find a community where frustrations and victories can be discussed, and there are options to connect and recognize each other.

“Sometimes you just need that one person to go to bat for you,” Million Perez said. “That one person to lift you up for that moment, and that’s what I’m hoping we can do at WilmerHale, in Denver — I’m trying to do that at as many levels as I can.”

One of her major goals for her career is to continue to develop her skills and legal practice to deliver more to clients and her firm. For the time being, she plans to keep trying at being the best she can be and give back to her multiple communities.

One piece of advice she offered to new attorneys was to build up a team. She encouraged attorneys to think about who a better legal writer or trial lawyer might be and to exercise those skills. “Very rarely are we working in a silo, and if you don’t know your weaknesses or strengths — you’re not going to get anywhere.”