Is a contract formed between an attorney and client that violates Rule 1.8(a) void, or merely voidable? The Colorado Supreme Court has taken up the issue to decide a case that has seen a disbarred attorney suing his former client over loaned money and the Court of Appeals ruled that the violation of Rule 1.8(a) renders the contract unenforceable.

David Calvert filed suit to recoup more than $100,000 he had loaned former client Diane Mayberry. He claimed they had an oral contract for repayment by her giving him a security interest in her house. Calvert had lost his law license in 2009 for ethical violations, including failing to follow sections of Colorado Rule of Professional Conduct 1.8(a) governing transactions with clients when he loaned money to Mayberry. The attorney disciplinary hearing board had determined Mayberry was a particularly vulnerable client because of mental illness and a chemical dependency.

In 2016, The Court of Appeals upheld summary judgment by a trial court in Mayberry’s favor. The court determined issue preclusion prohibited Calvert from bringing up factual issues that had been decided by the attorney disciplinary hearing board, because he had violated Rule 1.8(a) when he engaged in the same conduct that he claimed was the substance of the oral contract. The appeals court also determined Rule 1.8(a) is a matter of public policy because it protects the public, rather than the legal profession.

The Court of Appeals remanded the case to determine whether the attorney brought the appeal solely to harass the former client and her daughter or to delay the proceedings’ resolution and if so, award Mayberry reasonable attorney’s fees for the appeal.

The Supreme Court agreed to hear three issues: Whether an attorney-client contract formed in violation of Rule 1.8(a) is automatically void, whether issue preclusion can prohibit a disbarred attorney from relitigating factual issues decided by the disciplinary hearing board in a civil suit against a former client and whether sanctions against Calvert for groundless and frivolous litigation stand.

Anne Whalen Gill, the arguing attorney for Calvert, claimed the issues decided by the disciplinary hearing board and those brought in Calvert v. Mayberry are different from each other and so not barred by issue preclusion. She asked the court to see a distinction between a contract’s voidability and it being automatically void because of the ethical rule violation. Although Gill did not dispute the lower courts’ interpretation that Rule 1.8(a) is public policy, she argued for the Supreme Court to treat the contract between Calvert and Mayberry as voidable rather than automatically void with a blanket rule because of the case’s unusual facts.

Calvert’s claims differ from the issues decided by the disciplinary hearing board, Gill argued, because the board disbarred him for failing to follow provisions in Rule 1.8(a) requiring an attorney to put a business transaction with a client in writing and to advise him or her to seek independent counsel for the transaction. But Calvert’s claims against Mayberry included those for breach of contract and an equitable lien, Gill explained.

Justice Richard Gabriel repeatedly pushed back on Gill’s argument that the issues at hand are separate, sounding unconvinced that the court should revisit whether Calvert violated Rule 1.8(a).

In response to Gabriel’s queries, Fill insisted she believes the substance of the contract is valid. Gill later returned to the issue of void as against public policy, asking the justices to weigh the case’s unique facts rather than apply a catch-all ruling.

Although Calvert’s actions did harm Mayberry, Gill said, she also benefitted from the money he loaned her.

“So we’re getting into the question of weighing what’s going on, and I think that that should not be subject to a blanket rule,” she said.

The arguing attorney for Mayberry, Christopher Forrest, called “void” and “voidable” a “distinction without a difference” throughout his arguments. Though when pressed by the justices to suggest a possible narrow ruling, Forrester suggested a rule that the contract could be voidable at the client’s choice. 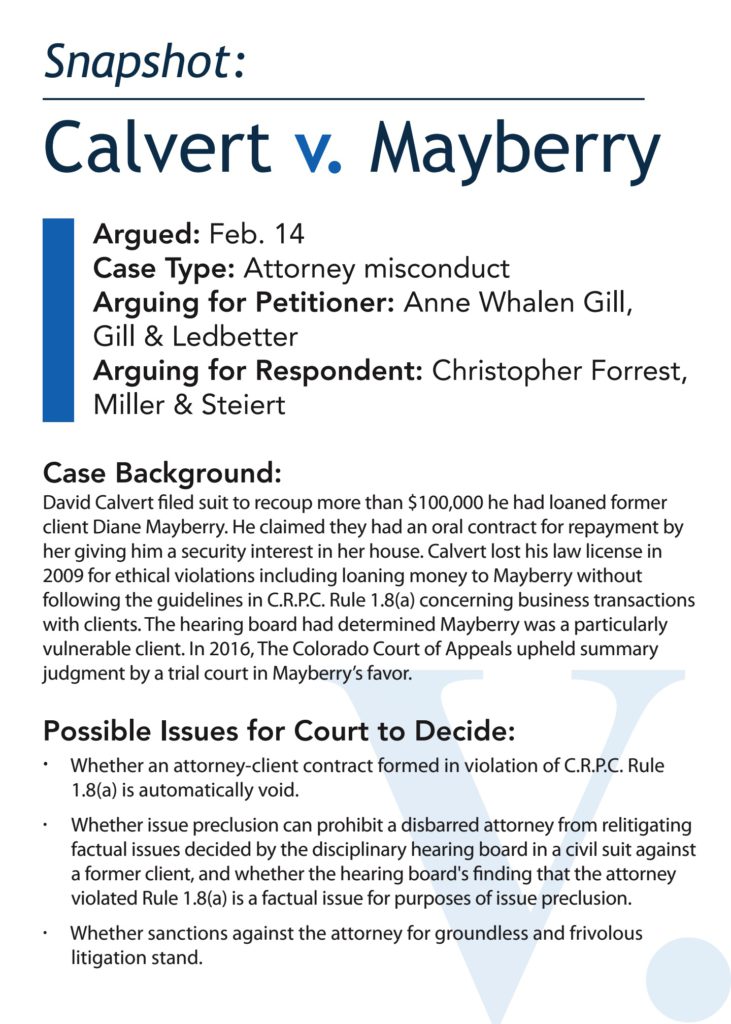 Justice Nathan Coats pushed Forrest to defend the breadth of the rule he first asked the justices to apply, asking whether Forrest was arguing that any violation of the professional conduct code for attorneys related to a contract should void it. Gabriel and Justice Monica Márquez also expressed concerns about so broad a ruling.

“When you’re using the invalidity of a contract under an ethical rule as a defense to its enforceability … I think it’s probably more a concept of voidable, in that I get to say this contract’s void, and that’s my decision as the client who was the victim of the unethical contract,” Forrest said.

Gabriel challnged Forrest further, asking him to explain whether it would make sense for the court to make a decision that enforcing the contract at issue would violate public policy as the narrowest ruling. Forrest said case law from around the U.S. ruling on violations of Rule 1.8 has not yet defined a clear distinction between “void” and “voidable” because some cases have found violations of Rule 1.8, but not declared the transactions void as against public policy as a result. Forrest pushed the court to provide clarity on the issue.

“You guys write the rules for lawyers,” he said.