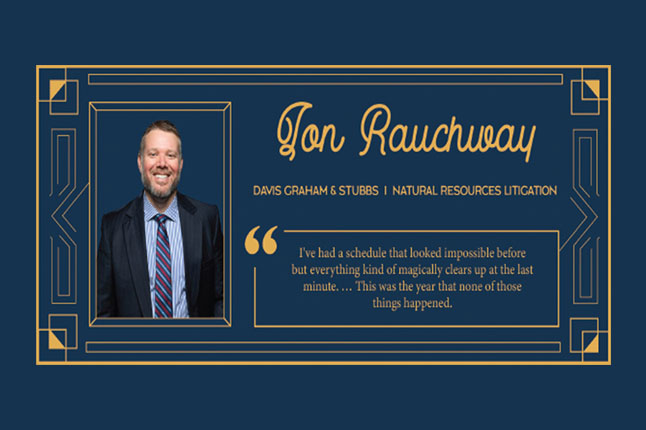 Davis Graham & Stubbs partner Jon Rauchway had a 2018 where cases stacked up to the point that four of them were set for trial or arbitration throughout the year with several happening back-to-back.

“I think most busy lawyers overbook themselves as a matter of practice, and I’ve had a schedule that looked impossible before but everything kind of magically clears up at the last minute. Cases get adjourned or moved and trials go away, settlements happen, judges rule on cases in a way that significantly narrows them,” Rauchway said. “This was the year that none of those things happened.”

Rauchway is a litigator focused on energy and natural resources issues, a key area for his firm. He moved into that niche because of the firm’s slate of large-scale, high-stakes cases in the area, and this year, he got what he asked for.

At one point, he had an arbitration scheduled to happen in Utah with a trial in Nevada set to start the next Monday. Thankfully, the judge granted an extension for one week to give him some time to finish the first case and prep for the next. Instead of having a weekend between an arbitration and a trial, he had 10 days.

In that particular Nevada trial, he said he got lucky by having to cross-examine the first witness and then having time to get caught up and prepare for the rest of the trial.

“That was probably the dodgiest part,” Rauchway said. “I remember telling one of my partners that if they call another witness who’s on my list, ‘I’m going to have to cowboy this one.’”

At another point in the year, Rauchway had a case that seemed to be on a clear path toward trial — what would have been his last and biggest for the year. The case had been up and down in front of the Montana Supreme Court twice over the course of its 10-year history, all of which Rauchway has been involved with. It had also had parallel issues in other cases go before the 9th Circuit twice. The case had been close to trial three times by Rauchway’s reckoning, and he said everyone involved was confident the latest date was going to be the one to happen for sure. And it was expected to be a major trial lasting six to eight weeks.

One aspect of the case, however, had gotten input from the Department of Justice under two different presidential administrations. Rauchway petitioned the U.S. Supreme Court to hear the case and resolve that issue, and he was convincing enough that the court called for the views of the United States. The Supreme Court indicating it was at least considering hearing the case helped Rauchway convince a trial judge to put the case on hold until those federal issues were resolved.

The Supreme Court has not yet decided whether to hear the case, but Rauchway petitioned the court on whether CERCLA, the federal superfund statute, preempts common law claims involved in the case.

“We think this is a pretty clear-cut case of preemption and statutory bar where the plaintiffs essentially disagree with the cleanup that EPA has selected, and they want to force us to pay for a different one to go to the heart of what the superfund statute is supposed to preclude and what federal preemption is supposed to prevent,” Rauchway said.

Despite the busy schedule, Rauchway saw success through 2018 as well. The Nevada case was his biggest to go to trial in 2018 and resulted in a complete defense verdict for his client at the close of a three-week trial in Reno.

The plaintiffs in that case had claimed his oil company client’s superfund site had contaminated their ranch land. There had been no dispute that the contamination on the property came from the client’s site, but Rauchway and the team of DGS attorneys disputed that the contamination was harmful. That was one instance where Rauchway’s interest in the science behind his cases helped convince a jury.

The plaintiff ranchers complained of arsenic from the client’s mine that had been in use in the 1950s and ’60s. “Yes, there was arsenic on their property, but not in any amount that would have any health impact or concerns. Arsenic is a natural substance up there, it’s coming out of the mines, it’s in the rocks,” Rauchway said. “I think some of the best evidence that we uncovered late was the arsenic in the water that they were complaining about was comparable to what comes out of the tap in Carson City when you turn on your faucet.”

Rauchway and the DGS team were able to tell the narrative that the ranchers had tried to sell their land multiple times for more money than they were able to get for it and the lawsuit was a way to get that. In addition to that side of the story, the science behind the case helped as well.

“I think it was an it was an example that the science was really important to understand. And, the toxicology for example, the significance of the levels of arsenic in the property were naturally occurring in other areas,” Rauchway said. “But I don’t think it was those facts alone. It was how those facts fit into the larger narrative.”