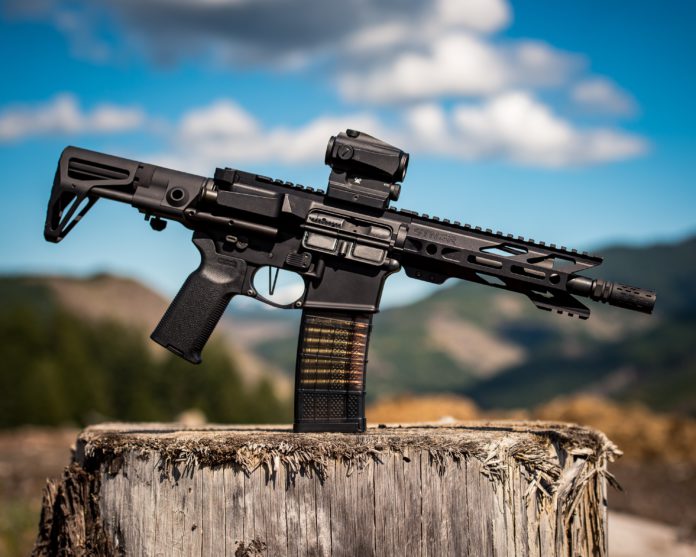 Much of the western U.S. — a region often portrayed as historically defined by firearms — may now be the only part of the country in which the Second Amendment of the Constitution does not protect a right to carry a firearm outside the home.

The uncertain and possibly anomalous legal status of a person’s right to open or concealed carry is the result of two decisions by the 9th Circuit Court of Appeals, the most recent being a March 24 ruling that indicates the Second Amendment does not guarantee a privilege to publicly possess a firearm.

The en banc appeals court decision in Young v. Hawaii addressed a statute that it said allows police and security guards to carry firearms and permits open use while hunting but that also gives counties authority to deny licenses to publicly transport a gun except where the applicant for one presents “an exceptional case” and shows a “reason to fear injury to his or her person or property.” The statute, which is similar to those in seven other states that tightly control permission to brazenly carry a gun, represents a class of laws that either give law enforcement officers discretion to give consent or allow a permit to be granted only in special circumstances.

The statute’s uniquely restrictive nature may render the case’s constitutional impact, if it endures, relatively weak. David Kopel, an adjunct professor at the University of Denver Sturm College of Law and research director at the Independence Institute, said “the American norm” is that it is generally easy to obtain a license to openly carry a gun, if one is needed at all. “It’s very different from all of them,” he said, referring to the Hawaii law. “Forty-two states have a law that says either you don’t need a permit to carry, like, say, Kansas or Arizona, or says, like Colorado, if you want a permit to carry then you’ve got to be a minimum age, you’ve got to pass a fingerprint background check, probably a safety training class, and then if you meet these criteria you can get a permit.”

Judge Jay Bybee’s 7-4 majority opinion for the 9th Circuit cited guidance from the Supreme Court’s 2008 District of Columbia v. Heller decision and the 2010 McDonald v. City of Chicago decision. In Heller, the justices addressed the question of whether a person has a constitutional right to possess a gun in their home. Justice Antonin Scalia cited one Antebellum-era Georgia case and one Reconstruction-era Tennessee case in an offhand comment indicating that U.S. states may not have universally recognized a right to publicly carry a firearm.

“The contours of the government’s power to regulate arms in the public square is at least this: the government may regulate, and even prohibit, in public places — including government buildings, churches, schools, and markets — the open carrying of small arms capable of being concealed, whether they are carried concealed or openly,” Bybee wrote. To Kopel, that language indicates the Young case sets the 9th Circuit apart as the only one “to affirmatively say there is no right.”

Whether that is a correct understanding of the decision is not entirely clear, though. Hannah Shearer, litigation director at the Giffords Law Center to Prevent Gun Violence in San Francisco, thinks the 9th Circuit correctly recognized that, historically, there has not been universal tolerance of public transport of firearms. “Not only maybe wasn’t it considered socially acceptable, there are a number of laws and court decisions recognizing that state governments could prohibit the public carry of firearms or they could regulate it very strongly,” she said. “They could express a pre for a part type of carrying or not carrying.”

Kopel, while offering a critique of the en banc panel’s historical colloquoy, appeared unwilling to accept that the impact of early American practice on the case’s import is decisive. “We’re not talking about the social history of the right to arms,” he said. “We’re talking about legal materials. What do the statutes and the cases say?” Shearer, on the other hand, believes Bybee’s historical discussion suggested the nation’s founding charter did not establish the right to carry a gun. “I’d say the majority is a little less than clear at times, but the import of their historical analysis is that open carry may be restricted just as concealed carry may,” Shearer said.

Irrespective of the text of the Second Amendment, the 11-judge 9th Circuit tribunal delved deeply into the history of gun laws, citing a similar approach by the Supreme Court majority in the Heller case. The justices hearing that dispute had examined the history of firearms laws in reaching their decision about the scope of the Second Amendment. Scalia’s decision in the case explicitly disclaimed any notion of a boundless personal right to possess or carry guns. “Like most rights, the right secured by the Second Amendment is not unlimited,” he wrote. “From Blackstone through the 19th-century cases, commentators and courts routinely explained that the right was not a right to keep and carry any weapon whatsoever in any manner whatsoever and for whatever purpose.”

The 9th Circuit held that the history of both American law and the English ordinances that predated American independence and the ratification of the Bill of Rights shows that no such right was recognized. Bybee discussed English laws dating to the 13th century, including the 1328 Statute of Northampton that had banned any man from bringing “force in affray of the peace” and prohibited traveling “armed by night” or “by day” at “fairs,” “markets” or “elsewhere” in his analysis. He then examined later changes to that statute, two Court of King’s Bench cases, medieval treatises, and the 1689 English Bill of Rights in reaching a conclusion that Englishmen had a right to carry arms only to the extent Parliament allowed it. He then found that the laws in neither the American colonies nor the states of the newly formed nation tolerated unregulated open transport of guns. “The colonies and early American states enacted facsimiles of the Statute of Northampton’s broad prohibitions on the public carriage of firearms,” Bybee wrote. “And where the colonies did allow public carry — or even mandated it — those laws were tied to the overarching duty to bear arms in defense of the community, and it was the role of local government, not individuals, to decide when that duty justified or mandated public carry.”

After the Constitution was ratified, he said, states continued to reject the notion of an unrestricted freedom to carry guns in public, even when asked to apply the state constitutional analogs to the Second Amendment that were then the only legal restraints on their authority to regulate guns. Bybee concluded that “more than 700 years of English and American legal history reveals a strong theme: government has the power to regulate arms in the public square.” “History is messy and, as we anticipated, the record is not uniform, but the overwhelming evidence from the states’ constitutions and statutes, the cases, and the commentaries confirms that we have never assumed that individuals have an unfettered right to carry weapons in public spaces,” he continued. “Indeed, we can find no general right to carry arms into the public square for self-defense.”

The 9th Circuit majority, continuing to explain its ruling, said that a decision denying that a constitutional right to flagrantly transport firearms is “fully consonant” with the Heller precedent. “Heller found that the pre-existing right to keep and bear arms is not a right to carry any weapon whatsoever in any manner whatsoever and for whatever purpose,” Bybee explained. “The central component of the Second Amendment” is the basic right of self-defense, whose exercise is most acute in the home.” The Nevada jurist also pointed out the panel’s holding squares with the Constitution’s mandate that the government provide for public safety. “One of the first duties of government is to afford protection,” he wrote, citing the landmark 1803 Supreme Court decision in Marbury v. Madison. “Indeed, among the fundamental privileges of citizenship in the United States is protection by the government.”

Bybee cemented the concept of federalism into a final pillar of his opinion. “American federalism contemplated distinct roles for the federal government and the states, and it was the states that had responsibility for maintaining the public peace,” he wrote. A look at state constitutions, he said, confirmed that fulfilling that obligation allowed for limits on the open carrying of guns. Thus, in his view and that of the six other judges who signed the majority opinion, “it would be anomalous in the extreme if, having gone to the trouble of spelling out the respective responsibilities of the new federal government and the states in 1789, the framers of the Bill of Rights undid that relationship with the Second Amendment (adopted in 1791) by overruling existing state constitutions and statutes.”

Four judges dissented from Bybee’s opinion. In one disagreeing conclusion, Judge Diarmuid O’Scannlain of Portland, Oregon, said the majority had overlooked the word “bear” in the Second Amendment. “In so holding, the majority reduces the right to ‘bear Arms’ to a mere inkblot,” the Reagan appointee wrote. In another, Judge Ryan Nelson of Idaho Falls, Idaho, complained that the majority of the 9th Circuit judges held the plaintiff, who represented himself in the U.S. District Court in Honolulu, to an unreasonably high standard of clarity in his arguments. “Consider what this holding of the en banc court means: any time a government agency hides behind an opaque policy to deny someone a constitutional right, a pro se litigant is held to some rigorous yet herein undefined pleading standard to even have his challenge considered in the first place,” wrote the appointee of President Donald Trump.

Whether the Supreme Court will review the Young decision is not yet clear. Alan Beck, a San Diego sole practitioner who represented the Hawaii gun owner in the case, said he is unsure whether he will ask the justices to do so, but that “it’s more likely than not that the option is going to be a writ of certiorari.” Shearer believes that, whether or not the justices do take the case, the opinion stands as a reminder that American governments have often acted to address gun violence. “People differ in whether they think you should look just at history,” she said. “But, when you look at history, you’re also looking at the way early governments responded to gun violence and early governments responded by gun violence by regulating guns.”

The 9th Circuit had earlier ruled, in a 2016 en banc decision in a case called Peruta v. County of San Diego, that the Second Amendment also does not protect a right to carry a concealed firearm. That decision also divided the court’s judges on a 7-4 vote.