The Colorado Supreme Court delivered another opinion where it acts as referee on when a charge levied by a municipality is a fee or a tax under the Taxpayers Bill of Rights.

The court delivered a decision May 21 in Colorado Union of Taxpayers Foundation v. City of Aspen holding a $0.20 charge levied by the City of Aspen for the use of disposable paper bags — the city has banned grocery stores from providing disposable plastic bags — is a fee, not a tax subject to voter approval under TABOR.

The decision written by Chief Justice Nancy Rice found the $0.20 charge is part of a regulatory program for waste management, and the amount has a reasonable relationship to Aspen’s cost of allowing paper bag use.

The decision came just under a month after the court’s ruling in TABOR Foundation v. RTD. In that case, the Supreme Court ruled that legislation causing an incidental and de minimis increase in tax revenue does not amount to a “new tax” or “tax policy change” under TABOR, and consequently doesn’t require voter approval.

James True, Aspen’s city attorney, did not respond to a request for comment on the decision.

The Supreme Court’s interpretation in the latest case turned on whether a charge primarily raises revenue for a government’s general expenses or if its primary purpose is to offset reasonable direct and indirect costs of providing a service or regulating an activity. If it is the former, the charge is a tax.

“The primary purpose behind Aspen’s charge is not to raise revenue; the primary purpose of the charge is to defray some of the costs of a comprehensive regulatory scheme aimed at improving environmental health and safety through a waste-reduction program,” states the opinion.

Aspen adopted its policy prohibiting disposable plastic bags in grocery stores while implementing a $0.20 charge for distributing paper bags in 2011. While grocers keep a portion of the charge to defray costs of education about its implementation, stores give the remainder of the charge to the city. According to the trial court record, Aspen set the charge amount based on a San Francisco study showing the cost of subsidizing the recycling, collection and disposal of plastic and paper bags in that market was $0.17 per bag. Aspen then increased the charge to $0.20 based on factors such as distance to recycling markets, a smaller waste stream and community input.

The trial court granted summary judgment in favor of Aspen, ruling the charge a fee, and the Colorado Court of Appeals affirmed the decision in 2015.

TABOR does not include a definition of a “tax.” To inform its decision, the Supreme Court examined the distinction it has established in previous cases between a municipality’s taxation power and its regulatory police power. A government charge related to its police authority to regulate for health, safety and welfare that is reasonably related the direct or indirect costs of that regulation is not a tax.

The Aspen decision stated that whether a charge is a tax can be determined from looking at the stated purpose for the charge and the practical realities of the charge’s operation. The Supreme Court determined Aspen’s bag-charge ordinance does not constitute a tax on its face because of the City Council’s stated purpose of reducing solid waste disposal costs for its citizens and of environmental protection.

Looking into the practical application of Aspen’s bag charge, the Supreme Court found Aspen is providing the indirect service of allowing paper bag use while also understanding that it will have to take on the cost of their disposal. Because the city had set the charge at $0.20 based on a San Francisco study about recycling cost subsidization, its own analysis and public input, the court found the fee amount bears a reasonable relationship to Aspen’s waste management costs.

“The government service for which the bag user is paying a fee is the waste disposal that will be necessitated by the use of that bag,” states the opinion.

Justice Nathan Coats dissented with Justice Brian Boatright joining, and Justice William Hood wrote a separate dissent. Both dissents examined the role of the judiciary in influencing taxation power, and concluded the majority decision is an overreach of judicial authority.

Coats argued Aspen’s bag charge is a “sin tax,” intended to discourage behavior deemed harmful or immoral. “While perhaps not designed exclusively to raise revenues, exactions in the nature of sin taxes clearly contain an element of revenue raising and have therefore been characterized as ‘[t]axes that seek both to deter and to collect revenue when deterrence fails,’” Coats wrote. 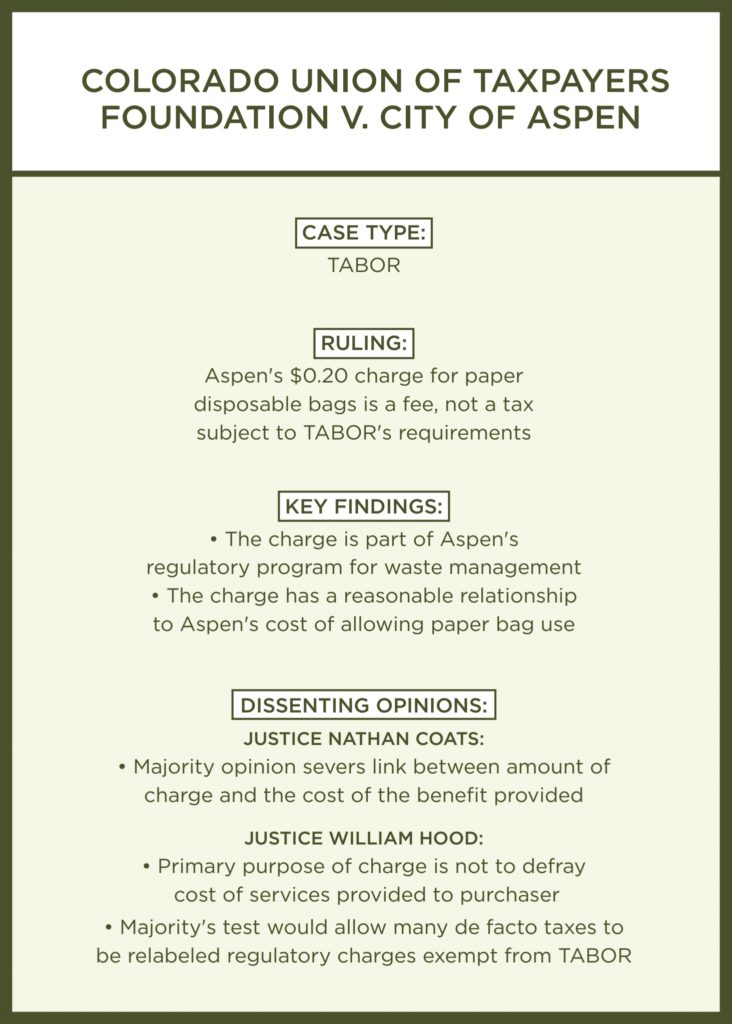 Pendley said he agreed both with Coats’ characterization of Aspen’s bag fee as a sin tax and with his argument that voters intended to distinguish between a sin tax and a fee when enacting TABOR.

“There’s a role for the judiciary, and it’s not to find exemptions or exceptions to TABOR,” he said. He added he wouldn’t necessarily put a lot of confidence in the Aspen decision because the majority was so narrow. The one-vote majority in the Supreme Court could change in a future case about a bag charge with a different judge on the court, or other change in circumstances.

Hood focused his dissent on the standard established in Barber v. Ritter, a 2008 case from the state Supreme Court holding a charge is a fee, and not a tax, when the “language of the charge’s enabling legislation explicitly contemplates that its primary purpose is to defray the cost of services provided to those charged.” There should be a direct correlation, Hood wrote, between the fee paid by bag purchasers and the service to provided to them, rather than the general public, in exchange.

“Here, Aspen’s bag ordinance, which overtly seeks to heap benefits on the entire Aspen community, is a tax,” Hood wrote. “Tempting though it may be to provide a reprieve to local governments seemingly hamstrung at times by the strictures of TABOR, that policy decision is not ours to make.”