The Colorado Supreme Court has suspended Court of Appeals Judge Laurie Booras while the Commission on Judicial Discipline investigates a complaint against her. Based on past annual reports from the commission, both the investigation itself and the nature of the allegations are seemingly rare.

The Denver Post detailed the allegations against Booras in a March 30 article, based on a copy of the complaint provided by John Sakowicz, a man claiming to be Booras’ former lover. Sakowicz accused Booras of sexually harassing him and stalking his family after their affair ended, including sending a “crude” drawing to his home and threatening to expose their affair to Sakowicz’s wife.

Sakowicz’s complaint included other types of allegations such as making a racist remark about a fellow Court of Appeals judge and failing to recuse herself from a case in which she might have had a conflict of interest.

“Given the national awareness of sexual harassment, as demonstrated by the #MeToo movement, I am enclosing a few examples of unsolicited emails of a sexual nature from Judge Booras,” Sakowicz wrote in the complaint, according to the Denver Post’s report.

Attempts by Law Week to obtain a copy of the complaint were unsuccessful.

The Colorado Commission on Judicial Discipline releases reports annually detailing the number and nature of complaints they have received, as well as any action taken. According to the 2016 annual report, the commission received 152 written complaints that year, a decrease from 175 in 2015. The commission dismissed 130 complaints during its initial screening process.

The most common type of complaint lodged in 2016 was that alleging bias or impartiality, with 26 received by the commission. The report noted some complaints included multiple allegations. According to the report, the commission investigated County Court Judge Jonathan Walker for, among other allegations, creating a hostile work environment for some court staff. Harassment is covered by Canon Rule 2.3 of the Colorado Code of Judicial Conduct. The Colorado Supreme Court temporarily suspended Walker during the misconduct investigation.

The disciplinary proceedings eventually culminated in a mediated agreement for Walker to retire in February 2017.

Article 6 of the Colorado Constitution and Rule 5 of the state Rules of Judicial Discipline detail the grounds for disciplinary processes against judges. Some bases for proceedings include willful misconduct in office, willful failure to perform judicial duties and intemperate conduct. Conduct violating the Canons also provides a basis for disciplinary action. The Canons are part of the Colorado Code of Judicial Conduct and cover the basic tenets of judiciary ethics. They include:

• Canon 1: Uphold and promote the independence, integrity, and impartiality of the judiciary, and avoid impropriety and the appearance of impropriety.

• Canon 3: Conduct personal and extrajudicial activities to minimize the risk of conflict with the obligations of judicial office.

• Canon 4: Do not engage in political or campaign activity that is inconsistent with the independence, integrity, or impartiality of the judiciary. 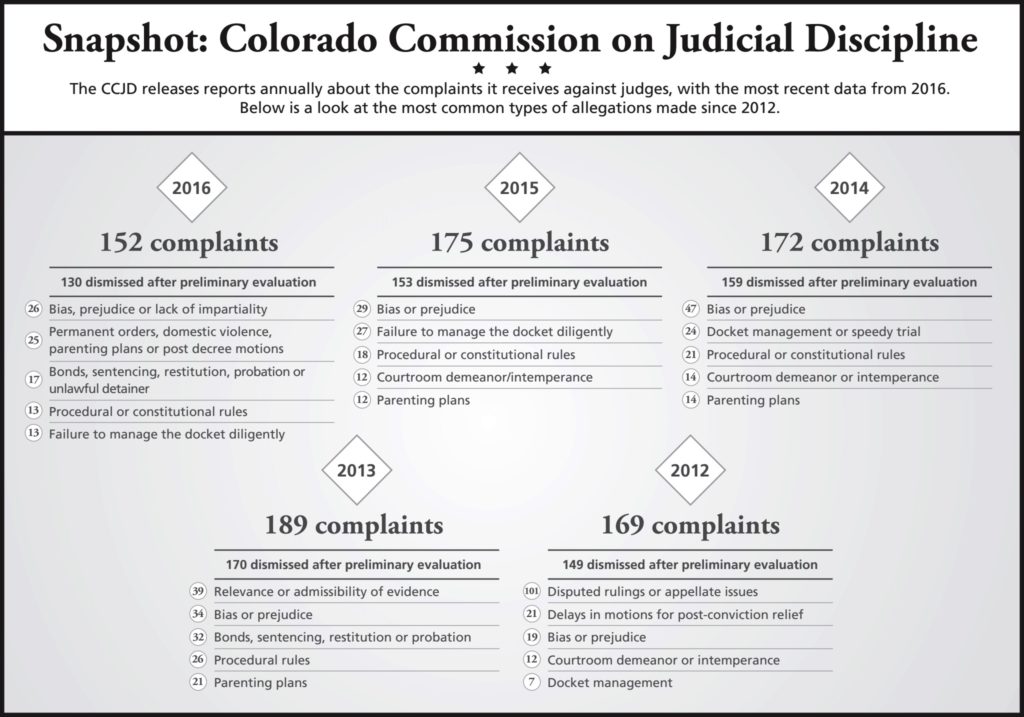 William Campbell, executive director of the Colorado Commission on Judicial Discipline could not comment specifically on Booras’ case, but he said although each case is different, the commission tends to consider suspending a judge while it investigates a complaint if the case is particularly complex or the allegations are especially serious.

The suspension gets the judge out of the courtroom during a controversial investigation, he explained, which also provides him or her with a measure of protection. A suspension doesn’t mean the commission is predisposed to a particular finding in its investigation, Campbell said.

The harassment allegations against Booras appear to concern her conduct outside her role as a judge.

Canon 3 in the Colorado Code of Judicial Conduct requires judges to conduct his or her “personal and extrajudicial activities to minimize the risk of conflict with the obligations of judicial office.”

Campbell said allegations against judges for conduct outside their judicial roles are not very common.

A Colorado Judicial Branch spokesperson told the Denver Post Booras would not comment. He also declined comment on the temporary suspension order, saying only such an order in response to a complaint is “not very common.”