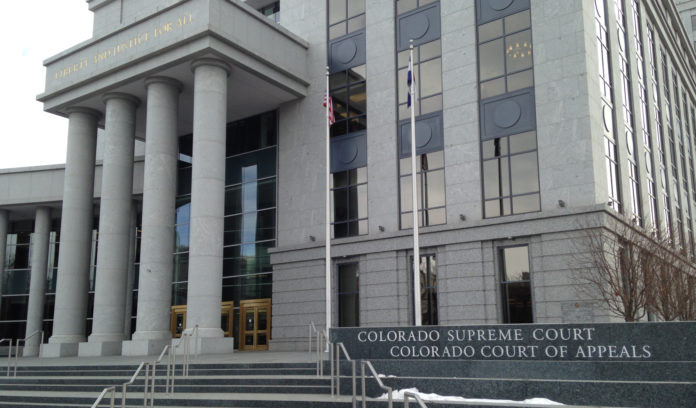 The Colorado Supreme Court held that a trial court presiding over a bench trial acted within its discretion when it asked both parties for additional arguments about properly admitted evidence before rendering a verdict.

The case stems from a series of bank robberies committed by the “Good Grammar Bandit,” a sunglasses-wearing criminal who robbed several banks by handing notes to bank tellers and fleeing on foot.

Levi Hall’s ex-boyfriend said he recognized Hall as the robber based on his physical characteristics and attire. Police started surveilling Hall, pulled him over for a traffic violation and found large sunglasses and $512 in cash.

Hall was charged with eight counts of robbery and waived his right to a jury. During the bench trial, the prosecution presented evidence that Hall was the Good Grammar Bandit, including the ex-boyfriend’s testimony, testimony from bank employees, video clips and still images from bank surveillance cameras, photos and video taken during traffic stops and photo lineups in which three out of 10 bank employees identified Hall as the robber.

The photographs of Hall from traffic stops showed him wearing big diamond-like earrings, but bank employees said the robber wore a hat or hood and they didn’t remember anything conspicuous about the perpetrator’s ears. Bank surveillance footage also showed that the robber’s ears were not visible during the crimes.

During closing arguments, the defense argued Hall wasn’t the robber in the bank videos, noting the differences between Hall’s traffic stop photos and the robber in the surveillance video, who didn’t have visible earrings.

After the prosecutor concluded his closing argument, the judge said, “We are not done, folks,” and asked for stills from the robbery footage to be shown. The judge then pointed out something reflective near the robber’s ear, which nobody had noticed previously. The judge asked whether anyone saw a flash. The prosecutor answered in the affirmative and surmised that the flash was an earring.

Hall’s attorney objected and asked the court to “make a determination on its own without the input of the parties.” The defense attorney also declined to answer the judge’s question about what the flash in the video might be. The court found Hall guilty on all eight robbery counts, adjudicated him a habitual criminal and sentenced him to 24 years.

A split panel of the Court of Appeals reversed Hall’s convictions, finding that the lower court violated Hall’s right to a fair trial when it asked prosecutors whether they saw an earring in the bank footage. The division concluded the trial court crossed the line from neutral arbiter to advocate by raising a line of argument the prosecution had declined to pursue. The majority also found the question treated the prosecutor like a witness by asking for their personal opinions. The intermediate court said the question was asked during deliberations because the prosecution had concluded closing arguments, depriving the defense of the opportunity to respond.

However, the Colorado Supreme Court disagreed, finding the trial court didn’t violate its duty of impartiality by requesting additional arguments from both sides about the flash seen in the video. The high court also found the Court of Appeals majority adopted an “overly rigid and formalistic view” of how deliberations must occur during a bench trial and the lower court didn’t deprive Hall’s lawyers of an opportunity to respond to its request for additional argument.