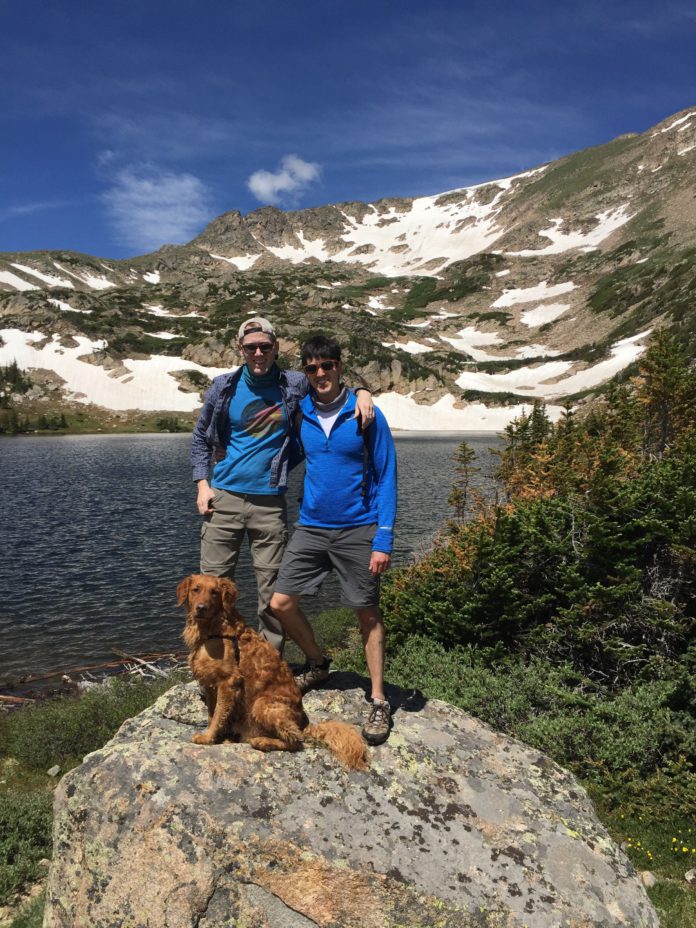 JonathanSkinner-Thompson joined the University of Colorado Law School this year as its only new faculty member. Appointed as associate clinical professor, Skinner-Thompson has already built an impressive record as a scholar of environmental law. Only a decade out of Duke Law School, the Californian has published nine articles in the academic literature.

Thompson-Skinner and his husband, Scott, who is also a member of the CU Law School faculty, came to Colorado after their careers took them to the East Coast. There, Thompson-Skinner worked in the Philadelphia City Attorney’s office, two large law firms, the U.S. Environmental Protection Agency, and the U.S. Department of Justice. Parents of a six-month old daughter, the couple made the Centennial State their home in 2017.

A Californian from Ventura County, Skinner-Thompson earned bachelor’s degrees in German and Asian Studies from the University of California at Berkeley before obtaining his J.D. at Duke in 2010. During college he studied abroad at the University of Hong Kong and Georg-August-Universität Göttingen in Germany.

Law Week Colorado spoke with Skinner-Thompson about his work at the Getches-Green Environmental & Natural Resources Law Clinic, his thoughts about the possible impact of recent changes to the U.S. Supreme Court on environmental law, and the developing field of climate change law.

Responses are edited for clarity.

LAW WEEK: Tell us about the work that law students at the clinic are doing and how the clinical experience helps them develop the skills needed when they enter the profession.

SKINNER-THOMPSON: We work with a number of environmental groups around the country and advise them on administrative law, rulemaking, and permitting. The types of projects range from providing public comments to preparation of petitions for rulemaking and environmental justice issues associated with air quality and air pollution.

LAW WEEK: Is the clinical work done by students similar to the work they’ll do as lawyers?

SKINNER-THOMPSON: I really want to give them as much freedom as I can to be the lead attorneys. I like to treat it like a relationship at a law firm, where I am the supervising attorney and they are the front-line associates. They have a fair amount of autonomy in deciding what the important issues are. In the clinic. What the client expects is real lawyering. They’ve come to us with questions and we help answer those questions.

LAW WEEK: Included in the mission of the CU Environmental & Natural Resources Law Clinic is a focus on environmental justice. What do you think practicing attorneys and judges should know about it?

SKINNER-THOMPSON: Historically, some community groups or people have been excluded from permitting decisions, rulemaking decisions, or at least not adequately approached for their opinions and their involvement even when those decisions would have a significant impact on those communities. The idea is that the regulators need to take that into consideration when issuing permits and when making siting decisions.

LAW WEEK: Citizen suits have been a mainstay of efforts to enforce environmental laws for about a half century. They have also often been used as a tool by environmental law clinics to provide practical litigation experience for law students working on behalf of public interest group clients.

Are you confident that this tool of government accountability will continue to be a fixture of environmental regulation?

SKINNER-THOMPSON: Citizen suits can spot issues and help focus the priorities at the state and federal levels. I don’t think they’ll go away, [but] getting in the door of a court requires you to demonstrate standing. Understanding that this is a constitutional requirement, courts can make it more difficult for you to establish standing. I would suspect the current Supreme Court is likely to significantly hamper the ability of groups to get into court. That’s going to be, I think, a real problem down the road.

LAW WEEK: Much has been written about the influx of federal appeals court judges appointed since January 2017. What changes do you think their rise may portend for environmental law?

SKINNER-THOMPSON: There will be greater skepticism of ambitious legal interpretations by agencies. I think that what may not change is deference to agencies on technical expertise.

LAW WEEK: How do you think that Justice Amy Coney Barrett’s rise to the Supreme Court will impact the court’s role in deciding the nation’s approach to the climate crisis?

SKINNER-THOMPSON: The first issue is whether the court would reconsider states’ standing in light of the current makeup. [Chief] Justice Roberts may be inclined to push back on the notion that Massachusetts v. EPA and the standing analysis there was proper.

The other issue is, what’s the court going to do with the major questions doctrine? Some justices have suggested that it’s a Chevron inquiry, in which case there needs to be clear authority to regulate greenhouse gas emissions under the Clean Air Act. There’s also a suggestion that the proper analysis is a non-delegation theory, in which case that question can’t be delegated to agencies at all absent some clear statement. If the court goes that direction, that could potentially have the effect of overruling the decision on the substantive issues that were in play in the Massachusetts case.

What we’ve started to see is a greater reliance on the Chevron exceptions. This is likely to be a bigger factor in the current Supreme Court makeup. Justices Kavanaugh, Gorsuch, and Roberts have all weighed in, in some fashion, on the [major questions] doctrine. I think the Court may be more likely to do something with that rather than get rid of Chevron altogether.

LAW WEEK: Do you see a risk that, if the court says the Constitution requires Congress to specify clearly what the nation will and won’t do about climate change, then it will lead to a regulatory problem because Congress can’t reach that level of consensus?

SKINNER-THOMPSON: I think it’s now widely accepted that climate change is happening and that we are seeing the impacts of climate change now and much earlier than we anticipated. Hopefully that would suggest that Congress can no longer rely on the notion that we don’t know enough about climate science and, instead, writes a climate statute. If that doesn’t happen, then I guess what we might face is a potential crisis where Congress refuses to act, and the Court has blocked federal agencies from taking any action.

LAW WEEK: What do you see as the most important current litigation relating to climate change?

SKINNER-THOMPSON: I think it’s [litigation around] the California waiver and the auto standards that California has issued. There is a really big question in play: whether California can exercise its historical and historic role in regulating vehicle emissions.

It will be interesting to see what happens under state law. We’re learning more and more about companies that have known about the impact of climate change, from oil companies to car companies, and what courts do with that information will be really fascinating.