In the absence of legislative immigration reform, the H-1B worker visa program hasn’t been overhauled under the Trump administration. But a federal agency’s shift in policy has nonetheless created a new normal for many immigration attorneys and their clients.

The U.S. Citizenship and Immigration Services announced that it has received 190,000 petitions for H-1B visas, which employers use to hire temporary non-citizen workers in highly skilled positions. That is about a 5 percent decrease from last year’s 199,000 applications and a 20 percent drop from two years ago.

Technology companies, universities and other organizations make much use of H-1Bs, and immigration attorneys say the decreased applications are largely a result of the USCIS’ increased scrutiny in reviewing them.

USCIS has been accepting an annual cap of 85,000 H-1B visas, and as it receives far more applications than that, it runs a lottery system to determine which 85,000 applications it will review. This year, the agency received more than double the cap since it began receiving applications April 2.

USCIS runs two separate lotteries. It first picks 20,000 applications out of a set-aside pool of applicants with master’s degrees or higher, and then it runs a second lottery to pick 65,000 out of the remaining applicants, including those that weren’t selected in the “master’s cap” lottery. USCIS is now currently screening the selected applications from the April 11 lotteries and will begin issuing receipts to applicants and their sponsors.

The H-1B program itself has become a subject of controversy. Critics have claimed that companies take advantage of the H-1B worker visa program to hire foreign nationals for professional positions at lower wages, effectively displacing American workers.

In his State of the Union address in January, President Donald Trump called for eliminating the visa lottery system altogether in favor of an entirely merit-based immigration system.

But so far, the bulk of the law governing H-1Bs hasn’t changed, said Brad Hendrick, who leads Caplan & Earnest’s immigration law practice group in Boulder. “Only Congress can make changes to those standards, and they haven’t had any luck passing immigration reform.”

Where immigration lawyers and their clients are seeing differences, however, is in how the federal government is now adjudicating H-1B cases. Under Trump, USCIS has issued policy memos announcing that the agency will put more applications under the microscope. USCIS has issued 45 percent more challenges or requests for information in H-1B cases between August and January, the New York Times reported.

The federal government is especially scrutinizing IT consulting companies that sponsor H-1B applicants in high volumes. Many of these firms place the H-1B holders with various U.S. companies not unlike a staffing agency. “For a lot of companies, that’s their whole business,” Hendrick said.

Those companies are perhaps the most affected by USCIS’ recent policy shifts in screening work visas, and that alone accounts for part of the overall drop in H-1B applications, Hendrick said. IT consulting companies that sponsor and place foreign nationals, however, had been on notice prior to the Trump administration. In 2010, USCIS released a memo reminding sponsors that the law requires H-1Bs to be issued for an employer-employee relationship.

But the federal government is now raising its review standards in more tangible ways. On Feb. 22, USCIS issued a policy memo telling employers that if they place an H-1B worker at a third-party worksite, the agency will seek additional documentation from them to show that the sponsor maintains a true employer-employee relationship with the worker. Those documents may include any that show the employer’s right to control the applicant’s work, the location where the applicant will work and any itinerary for off-site placement.

Last April, USCIS announced it would “take a more targeted approach” in visiting worksites to detect H-1B visa fraud, focusing on cases where the employers have a high ratio of H-1B workers compared with U.S. citizens and where the H-1B holder is working at a third-party site.

Roger Tsai, a partner at Holland & Hart in Denver who counsels employers on immigration matters, said that high-volume H-1B staffing companies are slashing their H-1B petition filings, which constituted a large part of the 9,000-petition drop from last year’s total.

“That doesn’t sound like a high number, but given the hot economy, that is surprising,” Tsai said.

Tsai said his firm has seen an “uptick in the number of cases that have received scrutiny,” and it isn’t just high-volume H-1B sponsors and consulting agencies that have been getting more pushback in the screening process. 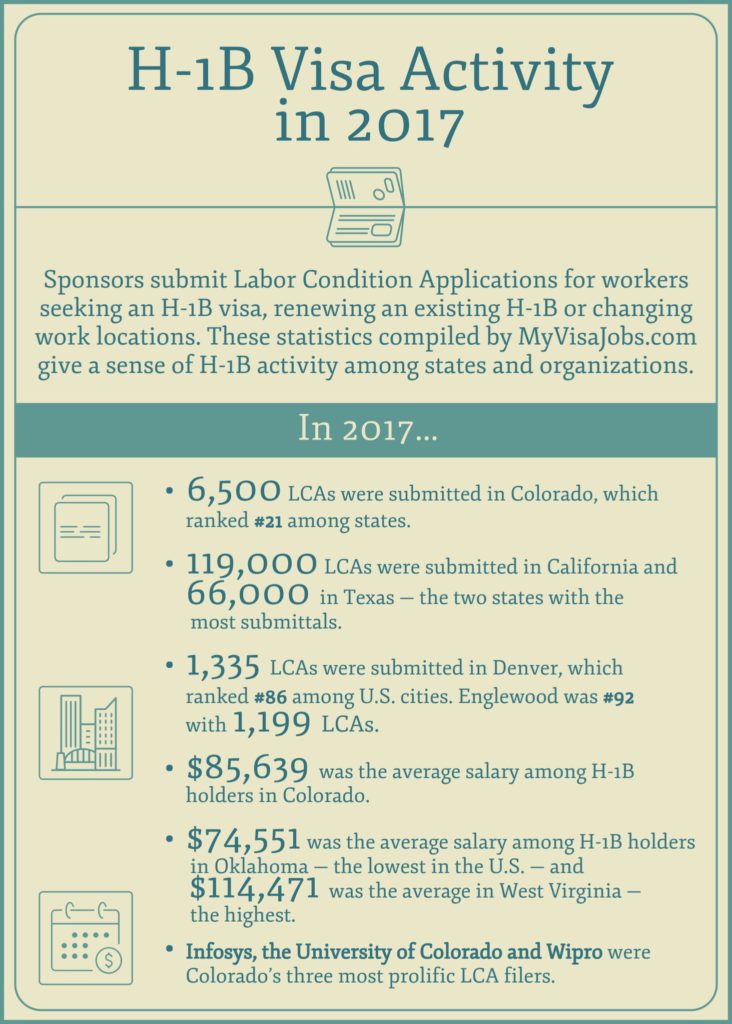 USCIS will ask for more information even on a well-prepared application for a computer software engineer, and for a sponsor that hasn’t historically abused the program, Tsai said. Some of those questions might be if the position truly requires a bachelor’s degree, or if the company has the wherewithal to pay the worker’s salary. Tsai said he “can’t recall many requests for further evidence on computer-related applications at all” prior to the Trump administration.

Hendrick said the federal government has asked questions last year that he hadn’t seen before for H-1Bs. A client of his was challenged on whether a civil engineer position qualified as “a specialty occupation” for the H-1B. Another employer was asked for evidence of its previous six months of rent payments on its worksite location.

The screening process is “not without some hassle and some angst for the employers that are dealing with this,” Hendrick said, adding that the increased USCIS pushback could have a chilling effect on future H-1B filings. “Employers start to wonder if having to go through this is worth it.”

Tsai said some employers have been anticipating the government’s further inquiry this time around, bolstering their applications with more information on the front end to prevent requests for further information later.

They have added documents they might not have included in previous H-1B filings; to show that a position meets the post-graduate level requirement, they have attached redacted resumes for other workers in that position who are U.S. citizens, or the employer’s recent job postings showing the position calls for a bachelor’s degree or higher.

But it remains to be seen whether that extra documentation will spare employers the government’s requests of further information, or even denial of the application altogether. That is assuming the sponsor’s application gets selected in this month’s lottery in the first place.