“Thank you very much Mary Mullarkey for being the first, because I get to be, ‘Who cares that you’re the second.’ And that fits my personality and fits me really well,” Rice told Law Week in February. “So I think Mary and Jeannie and those people are about 10 years older than I am for the most part, and a lot happened in those 10 years. I mean, they’re the ones who knocked down the doors.”

Rice says what she means, because straightforwardness is a hallmark of her personality. Despite her general candor, Rice chose not to give interviews following her retirement announcement. Rather than focusing on what’s next for her, many who worked with Rice were able to provide insight about her career on the bench, her most important judicial projects and what she was like as a mentor and boss.

Her straightforward demeanor defines how she approaches her work: The speeches she gives, the opinions she writes and how she views the role of law and the judiciary in everyday people’s lives. To Rice, the law should be a tool to solve problems and should be understandable to that end.

“She has this approach — especially as a professor it comes out — that the law is for us. It’s for the people, it’s for everybody,” said Laura McNabb, an associate at Wheeler Trigg O’Donnell who clerked for Rice from 2013 to 2014. “So anybody should be able to understand it, and a good lawyer is someone who can teach it to anybody.” McNabb took an advanced trial advocacy class with Rice at the University of Colorado Law School and said Rice’s down-to-earth approach inspired her to apply for the clerkship. 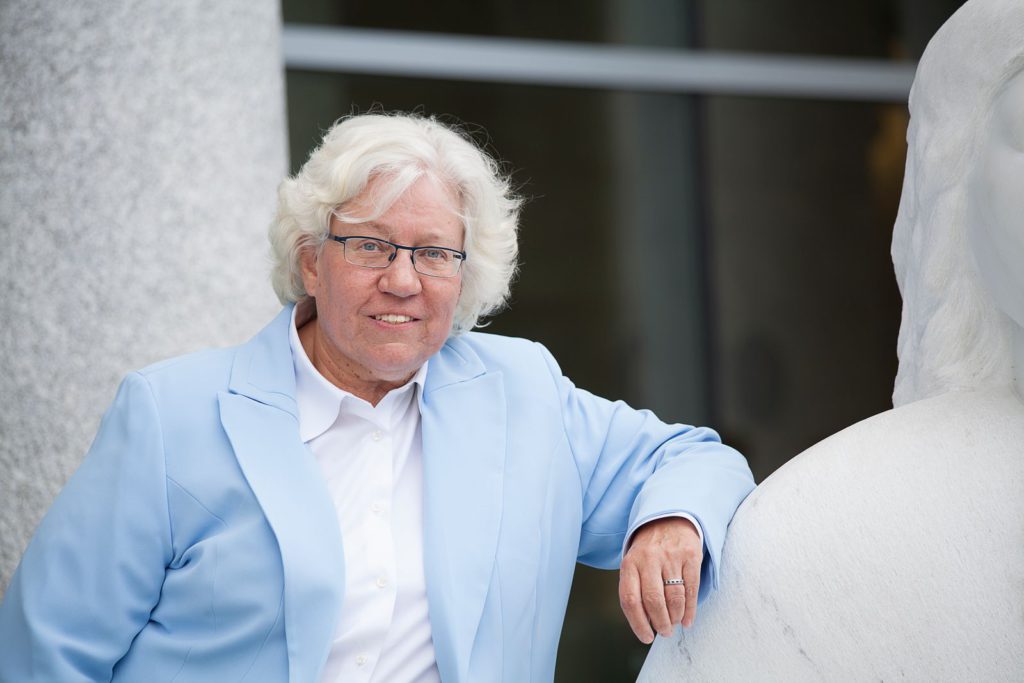 Rice as an Administrator

Each chief justice wears hats as the court’s top administrator and head of the whole state judiciary in addition to her role as a judge. She has to consider how to attract, retain and motivate Colorado’s judges and also spearheads judicial projects related to pressing issues or those she’s passionate about.

Rice has advocated for additional funding for probation officers and programs centered on rehabilitation as well as for courthouse improvements and new construction. In March, she created a blue ribbon commission to evaluate pretrial release practices around the state.

Other initiatives have included reducing the number of children ordered to detention for truancy from school as well as increasing the number of language interpreters in courts and their compensation.

Rice also oversaw completion of electronic filing systems for civil and criminal cases. She always embraced new technology that could make the court function more efficiently, said Blake Reid, now a University of Colorado Law School associate clinical professor who, as a CU Law student, took a motions advocacy class with Rice and clerked for her after graduation.

He helped her with tasks such as loading documents onto iPads in preparation for oral arguments.

“She really took seriously the operation of the court as an institution and how it functioned, and I think she really saw technology as being an important part of that.”

Rice’s former clerks have distinctive insight into her thought process. When they helped draft opinions, they needed to think about how she would write them.

“As an editor, I think she has a ‘less is more’ approach,” said Shalyn Kettering, a Davis Graham & Stubbs associate who clerked for Rice after she graduated from CU Law in 2016. “…Opinions [are] used by lawyers, by judges, they’re read by the public. … In all of the different audiences we want, she cared that her opinions were comprehendible.”

Part of making opinions useful means understanding how readers could take minute words or phrases out of context and apply meaning to them in ways the court didn’t intend, Kettering said.

“She always had an eye toward thinking about how could this be taken in a way that wasn’t what we meant,” Kettering said. “So trying to make sure whatever you said didn’t oversay, didn’t say more than was needed, so as to reduce the negative fallout that sometimes naturally happens by the common law system.”

Rice’s eye toward the practical came through in one of her recent penned opinions, Colorado Union of Taxpayers v. City of Aspen. The highly anticipated decision examined whether a $0.20 charge levied to consumers on disposable paper bags from grocery stores was a tax or fee, and Rice gave much weight to the practical realities of how the charge functions.

“We must examine the practical realities of how the charge operates to determine if this charge is in fact imposed to defray the direct or indirect costs of regulation and if the amount of the fee is reasonable in light of those costs, or if the charge’s primary purpose is to raise revenue for general governmental use,” she wrote in the opinion.

Her pragmatic opinion of the judiciary goes from her role as chief all the way down to her path to becoming a judge. Rice first had the desire to be a judge watching her grandfather work as a bailiff.

“It just all seemed like it would be terribly fun to me. So it wasn’t rational, really,” she told Law Week in February. “I think the more rational way to want to be a judge is to become a lawyer first and practice in the courts and respect judges and enjoy the kind of work that they do and then follow up on that.”

Despite her initial perception of being a judge, she did follow her “rational” path to the bench. Rice graduated from the University of Utah College of Law in 1975. She was an assistant U.S. attorney from 1977 to 1987 and deputy chief of the appellate division of the U.S. Attorney’s Office in Colorado from 1985 to 1987.

She spent 1987 to 1998 as a judge on the Denver District Court before her appointment to the Supreme Court by then-Gov. Roy Romer in 1998. Those who have worked with her say her trial judge background has tied into her understanding of the practical impact of the court, especially on everyday people.

“As a trial judge, you see all kinds of disputes. You’re aware of the emotional drama that’s going on in the courtroom, the challenges that are faced by the lawyers, the clients, as well as the trial judge,” said former Chief Justice Michael Bender, who preceded Rice. “Most of the cases … that come up in front of the Colorado Supreme Court deal with some sort of emotional dynamic that’s reflected in the issue before the court. And so I think that being a trial judge clearly qualifies you to have an excellent perspective on what’s really going on.”

As a Public Speaker

As prominent as Rice’s work itself is the distinctive humor she infuses it with. She delivers quips in a dry tone so devoid of irony it’s sometimes difficult to be totally sure she’s actually joking. And when she makes a joke in a speech, chances are it isn’t the first or last time she’s told it.

The biennial State of the Judiciary address gives the chief justice an opportunity to talk about the projects she and the associate justices have spearheaded. A few issues prominent in Rice’s 2017 speech were the efforts to reduce the number of children put in detention because of truancy and to reduce the instances of juveniles shackled while in courtrooms.

But inked into the record as the memorable piece of her 2015 address is a comment she made about courthouses badly in need of physical repairs and improvements, particularly in Walsenburg, Pagosa Springs and Cortez. “In Walsenburg, for example, and I mean no disrespect, there was bat [expletive] on the judges’ chairs. I guess I don’t have to be all that respectful to the bat [expletive], but you know what I mean.”

The memorability of the comment didn’t escape Rice, and it resurfaced in her next State of the Judiciary address. “I’ve given you an awful lot of information, and I know most of you came here because you just wanted me to talk about the bats. Is that right?” she said according to a transcript of her 2017 address. “Sorry that I had to give you so much heavy information before we got to it. Yes, we have gotten rid of the bats in Walsenburg and their various byproducts.”

“She’s very incisive, I think that’s why she’s funny,” Kettering said. “I think that’s because she pays attention to what matters. … She doesn’t take things too seriously that shouldn’t be taken seriously, and I think that’s a really redeeming quality of a justice.”

And by several accounts, that sense of humor isn’t something she only brings out for public speeches. McNabb recalled a time she threw away a soap dish in Rice’s chambers she didn’t think was important.

As it turned out, the dish had sentimental meaning for Rice, and McNabb sheepishly admitted she’d thrown it out. Rice didn’t get angry, but periodically teased McNabb about the incident throughout the rest of her time as a clerk.

“She was very cute for several months, just enough that I knew she was kidding,” McNabb said. At the end of her clerkship, McNabb gave Rice a new soap dish as a parting gift.

Rice said she has heard judicial hopefuls ask what the best career path to becoming a judge is. She tells them there isn’t any such thing, but to focus on doing what they do well. “The guy who was the judge down in Trinidad was just this old white man. Like I say, it wasn’t rational, it just was something that I thought would be so cool. … And here we are.”