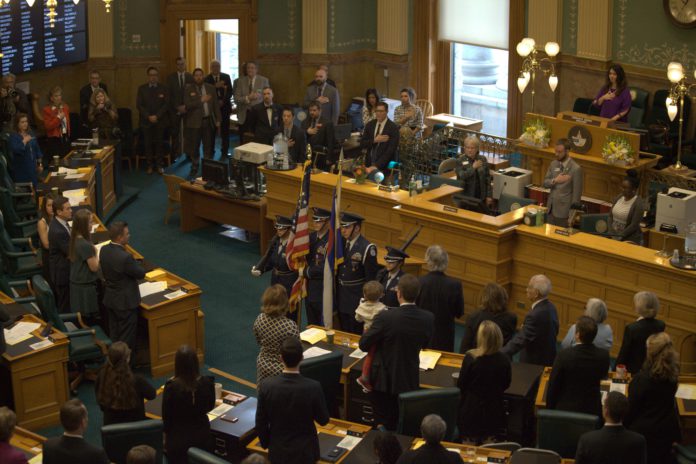 The second session of the 71st General Assembly got underway Wednesday with leading legislators promising bipartisanship as well as finishing old business.

The focus on sexual harassment from the off-season continued with protestors outside the Capitol calling for the resignation of accused Rep. Steve Lebsock and recognition of the key issue from all of the party leaders.

Inside the Capitol, however, the General Assembly returned with little in the way of new welcomes or introductions. Reps. Dylan Roberts of Eagle and Judy Reyher of Otero County joined the House of Representatives. And after the usual pomp and circumstance that comes with the opening of the legislature, opening remarks from party and chamber leaders setting their agendas for the next 118 days and legislators singing Happy Birthday for colleague Rep. Polly Lawrence, the session got underway.

Cristanta Duran, who faced scrutiny as well over the past few months, addressed the issue in her opening remarks to the House legislators. Duran was among the legislators who worked on changing the Capitol’s sexual harassment policies and drew criticism after dismissing a sexual harassment complaint against Rep. Paul Rosenthal in the week before the start of the session. After acknowledging the successes of the previous session, Duran turned to the obstacles ahead for 2018, the “most disturbing” of which being the allegations of sexual harassment coming out around the country.

“We must confront these issues head on and successfully reform the culture of the Capitol. There is no place for harassment, hate speech or discrimination in this chamber,” Duran said. And with that, she said the legislature must reauthorize the Colorado Civil Rights Division and bring about cultural changes.

“There should be no double standard requiring women and people from underrepresented communities to feel that they have to work twice as hard and be twice as smart to make partner at their law firm, climb the corporate ladder or succeed in public service,” Duran said.

Likewise, Republican leaders addressed the issue as well, with House minority leader Patrick Neville expressing his outrage and his belief that new processes will help with handling future issues. In echoing Lebsock, Neville stressed the importance of due process in handling complaints. “When accusations appear where the law is made, we must observe due process so that we fairly and objectively handle complaints and workplace issues,” he said. “The new policies we have adopted and the additional HR resources we are providing will help ensure future issues are handled appropriately.”

Transportation was a key issue for all with bipartisan support, with a major transportation funding bill introduced in the Senate out of the gate as Senate Bill 1.

On education funding, chamber leaders were vague in what specific goals they had for education other than saying they plan to propose a balanced budget this session and while Duran said that is an opportunity to address “chronically low funding” for education, Neville cited an increase in spending in public education over the past 12 years and said, “We’ve spent a great fortune on K-12 education, but we haven’t gotten a great result. The time has come for us to have an open mind to new approaches to education because it is obvious, that what we’ve been doing isn’t working.”

PERA reform was also addressed as a key issue for the session for all leaders. Both parties agree that PERA reform is needed, though just exactly what that looks like is a sticking point. Sen. President Kevin Grantham said PERA’s underfunding is causing damage to other agencies’ credit and that public sector employees should have the same choice in retirement planning as other “State of Colorado employees.”

“The fact that we don’t exactly know how much trouble we’re in also shows the need for more transparency in PERA’s finances,” he said. “It will only serve to bolster confidence and give better understanding of the challenges we now face.”

Duran specified that PERA reform shouldn’t harm the public sector employees who use it. “It would be unfair to balance PERA solely on the backs of hard-working public servants,” she said. “Likewise, slashing cost-of-living adjustments for retired state employees could put many of them deeper in the hole every time the cost of living rises. Our goals must include a PERA solution that ensures its long-term solvency while being fair to current employees and retirees.”

On addressing the opioid epidemic, Grantham and Duran highlighted a group of bills being introduced to improve training for safe prescribing and overdose prevention and increase access to residential and medication-assisted treatment.

Also top of mind for legislative leaders was the growing partisan divide in Washington, D.C. With a message of bipartisanship and a focus on several key issues, legislators hope to see more successes following those of last session.