Law360 on June 18 released a report on the racial and ethnic diversity in the U.S. legal field, focusing on law students and the hierarchy of positions at firms.

There were minute improvements in numbers for minorities in the field with white attorneys continuing to dominate the profession. For the fourth year running, at every level of a typical firm, minority attorneys’ proportions increased by less than 1 percent.

The report’s data comes from 300 law firms surveyed across the country and showed that racial and ethnic minorities make up approximately 21 percent of nonpartners and 8.2 percent of equity partners.

According to the American Bar Association, minorities make up 31.3 percent of students. At more elite law schools, first year student populations have over 40 percent racial or ethnic minorities. Harvard reports its proportion of minority students is up to 45 percent.

“Often, these attorneys’ formative experiences with the legal profession don’t involve BigLaw, so they aren’t thinking of that as an option when they enter into — or graduate from — law school,” said Jocelyn Allison, managing editor of Law360.

The general population of the U.S. is approximately made up of 61 percent white, 18 percent Hispanic, 13 percent black and 5 percent Asian.

In ABA accredited law schools, there is a close reflection of the general population with student proportions approximately at 60 percent white, 13 percent Hispanic, 9 percent black, and 6 percent Asian-American.

Nonpartners and partners statistics are overwhelmingly white at about 78 percent and exactly 90 percent of attorneys respectively.

Minority women are in a Venn diagram that puts them doubly at a disadvantage as women are also underrepresented. They make up 8 percent of attorneys Law360 surveyed, dropping down to only 3 percent of partners. 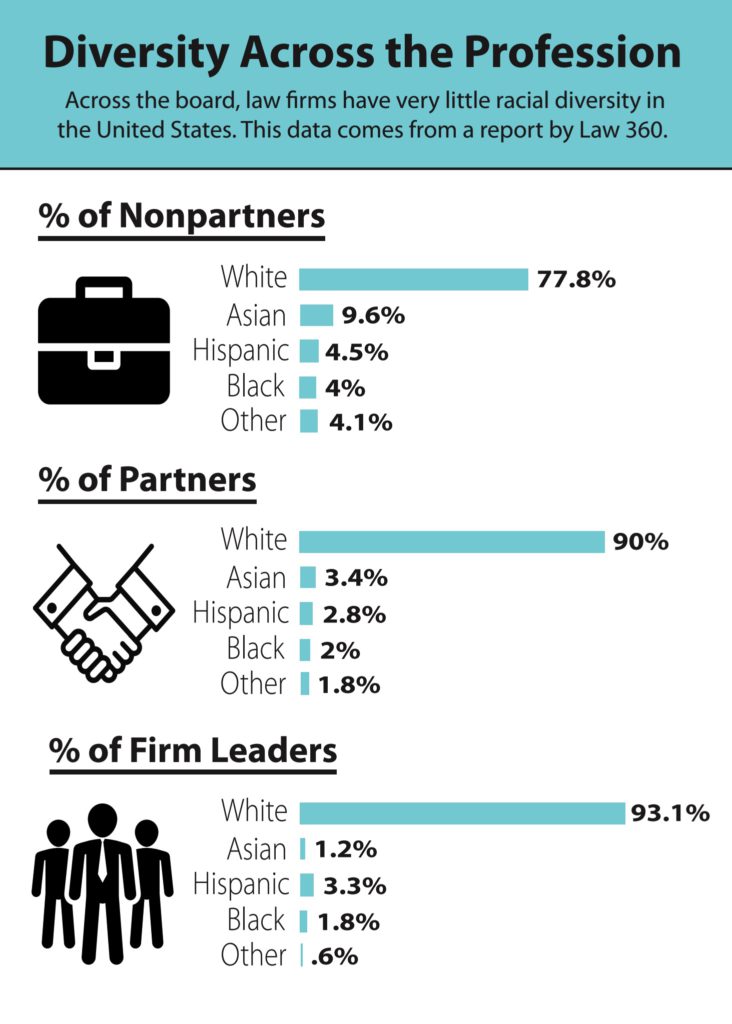 In the report, it is said that while many firms are glad to have more diverse employees, they fail to support and retain them. Brian Duffy, CEO of Florida-based Greenberg Traurig told Law360 that for a firm to hold onto minority attorneys, the training of the lawyers of color must be done by senior partners as they have the most influence over what happens at the firm.

“Mentorship opportunities and a sense of community are often lacking for these lawyers in law firms,” said Allison in an email. She continued to say many minority lawyers are passed over for assignments.

“You can’t hire your way to increased diversity,” said Karen Hester, CEO of the Center of Legal Inclusiveness, reinforcing that in order to stay diverse, a firm must do more than hire lawyers of color. She thinks that an emphasis is needed in helping young adults who are minorities learn the logistics of getting to law school and that it has been done by people who look like them. In reference to how her younger brother went to law school after her, Hester said, “I was able to share with him information that I didn’t necessarily have when I started.”

Local minority bar associations in Colorado take mentorship seriously. The Sam Cary Bar Association has informal mentorship programs for the Black Law Student Association as well as for black students at the University of Colorado and University of Denver law schools. The president of the SCBA, Vanessa Devereaux told Law Week that they are making a formalized mentoring program to give further assistance.

Seeing people of one’s racial or ethnic group in the field doesn’t only help future attorneys, it can help litigators. Catherine Shea, president of the Colorado Women’s Bar Association says that it gives comfort to litigants. “Our profession needs to reflect the people that we serve and if we’re not doing that I think that’s a problem,” said Shea.

Hester thinks that the lack of diversity is indicative of a damaging attitude. Either people who could increase diversity are satisfied with the status quo or are afraid of the unknown. Hester said, “If you are satisfied with the status quo, why would you want to change things? And if you’re fearful of the unknown, then you may think things will get worse than they currently are.”

Hester made it a point to say, “This is an issue that affects us all and we should all play a part in making change.”