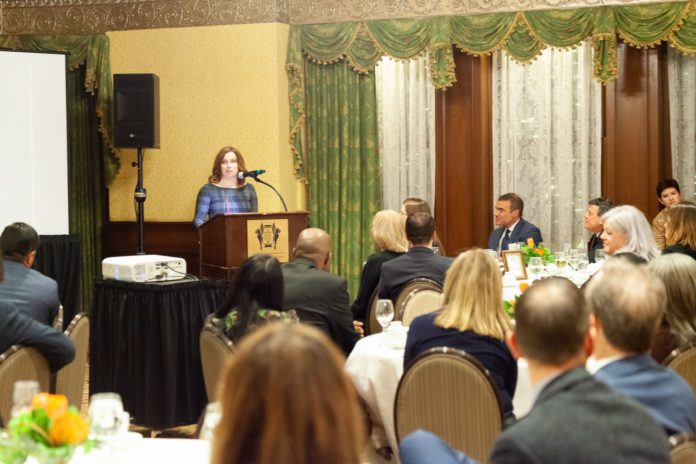 On Thursday night, Theresa Wardon Benz received the Richard Marden Davis Award, given each year to a lawyer under 40 who is accomplished professionally and in civil service. The award is sponsored by the Davis family, Davis Graham & Stubbs and the Denver Bar Association.

Edward Stewart, a partner at Wheeler Trigg O’Donnell and one of Wardon Benz’ mentors who spoke at the award presentation, said she seems to receive a new award for her professional or civic accomplishments every few months.

“It seems somewhat cruel that they keep reminding me how much more successful my mentee is than I will ever be, and then they always add to it that she did it at an age under 40,” he joked.

Wardon Benz has spent her career at WTO after clerking for then-Judge Neil Gorsuch on the 10th Circuit Court of Appeals. She has emerged as a star of the firm’s defense litigation practice. In 2017, the Colorado Supreme Court ruled in favor of WTO’s client, Ford, in a case Wardon Benz argued. A jury had found in favor of a man injured in a car crash who claimed Ford designed a defective car seat. The Supreme Court decided the trial court made a mistake when it instructed the jury to apply two tests separately in figuring out whether the car seat design was defective.

Arguments for claims of both negligence and strict liability for design defects have to be based on the same analysis, the court said, and overturned the jury’s judgment in favor of Forrest Walker. Although a new jury on remand found Ford liable again for Walker’s injuries, the Supreme Court’s ruling created new case law for jury instruction.

Wardon Benz talked about how her background growing up in poverty has fueled her fighting personality as a lawyer and her instinct to help the community. She served on the board of The Gathering Place, a drop-in center for homeless women, children and transgender people, and she’s a mentor in the Law School…Yes We Can pipeline program. Wardon Benz also does pro bono immigration law work.

“I had to figure out things on my own, which gave me grit and determination,” she said.

Wardon Benz said she used to feel shame growing up poor, but now is proud of her background. She went to Boston College on scholarship and then worked as a paralegal for two years before going to law school. She said she latched onto the idea of a legal career when she took a business law class in college. She got her first legal job at the firm of a friend’s father, a formative experience since she hadn’t known any lawyers growing up.

“It’s hard to want to be something if you don’t even know what it is, or you don’t know how to go about going there.”

She closed her speech by telling the story of an administrative case she won as an associate for a woman whose career as a military nurse was put in jeopardy because she had been brought to the U.S. illegally as a child, and her father had gotten her a fake Social Security number. She eventually received legal permanent resident status and was issued a real Social Security number, and the fake number was discovered when she used her real number for her nursing license. She pled guilty to charges, which triggered a ban on receiving federal money for health care services, meaning she couldn’t practice as a nurse.

Wardon Benz won the woman’s appeal by arguing the bar on getting federal health care money was intended to apply to people who commit health care fraud. She said she learned in the last few years the woman has since become an officer in the military.

“It doesn’t get much better than getting those kinds of results and really changing someone’s life.”