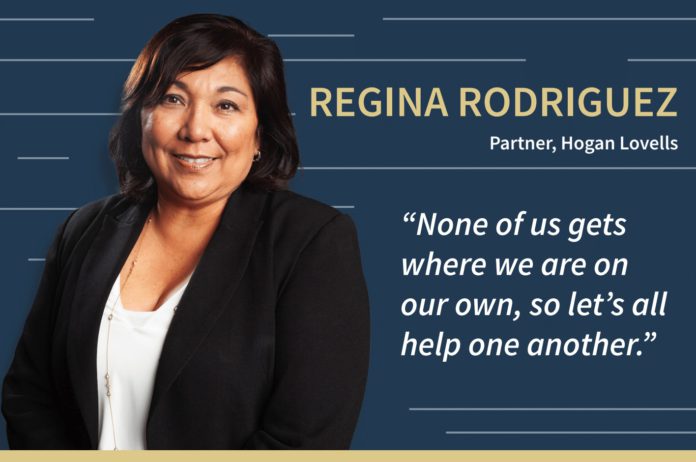 Hogan Lovells partner Regina Rodriguez is already a well known name in the commercial litigation world. Her career has taken her through the U.S. Attorney’s Offices in Colorado and Washington, D.C., BigLaw firms and saw her nominated by President Barack Obama for a federal judge seat.

Her reputation as a trial lawyer also helps drive work her way, like in the instance of a major case for a Tulane University researcher last year. But while talking about her career, Rodriguez is quick to list off the achievements of the other attorneys she’s worked with and her strength in building teams and mentoring others.

She highlighted the people she’s worked with in the early stages of her career after moving from doing criminal litigation for the U.S. Attorney’s Office to civil litigation at Cooper & Kelly. There, she worked with other former DOJ and DEA attorneys like Elizabeth Starrs, Beth McCann and Richard Caschette — people whom she says are now “the lions of our industry.”

And although she has plenty of major cases of her own that could stand out as career milestones, she highlights her career with watching young attorneys make partner or start their own firms or seeing her peers find success — such as helping to lure now-U.S. District Magistrate Judge Nina Wang to Colorado from Washington, D.C.

“None of us gets where we are on our own, so let’s all help one another,” she said. “Probably some of the most gratifying things that have happened in my career were not things that happened to me or for me — it was for those people that I’ve worked with, that I’ve mentored and that I’ve trained over the years.”

As for her own work, Rodriguez is known for her litigation skills. Last year, she was pulled in to a case for Tulane University and one of the school’s research professors who had studied pain receptors in the brain and developed a molecule that was said to relieve pain in a similar fashion as synthetic opioids, but without the addictive properties or effects that might impair someone’s motor control.

“So this, if they are able to actually commercially develop it, will be revolutionary, because as we understand, we’re in the midst of an opioid crisis,” she said. “To the extent they can develop a synthetic compound that does not have those adverse effects, you could have really life-saving benefits for many people.”

Tulane had been working with patent counsel on intellectual property issues. Their concern was that the company that licensed the technology allowing the doctor to do the research wasn’t going to allow him or the school to place it with a company that would develop the drug for public use.

As it became clear that the dispute was heading toward a jury trial, the university brought in trial counsel. Rodriguez and a team of Hogan Lovells attorneys joined the case in a matter of weeks before the set trial date. The case was settled before trial, but according to Rodriguez’s nomination, the team reached a highly favorable resolution on behalf of the clients.

Rodriguez said she tends to gravitate toward cases like that. She’s not an intellectual property litigator, but she said she enjoys cases with complex medical or regulatory issues and she enjoys translating the technical information for a jury or judge who might not have the experience her clients do.

“I think that I provide very practical and pragmatic advice for my clients on some of their very thorny issues,” Rodriguez said. “I think that oftentimes, in the work that we do, we see people in very challenging times, and sometimes that’s not their best times. And that’s the point where we get to truly be advisors and professionals and really help guide our clients through with clear vision in those rocky waters.”