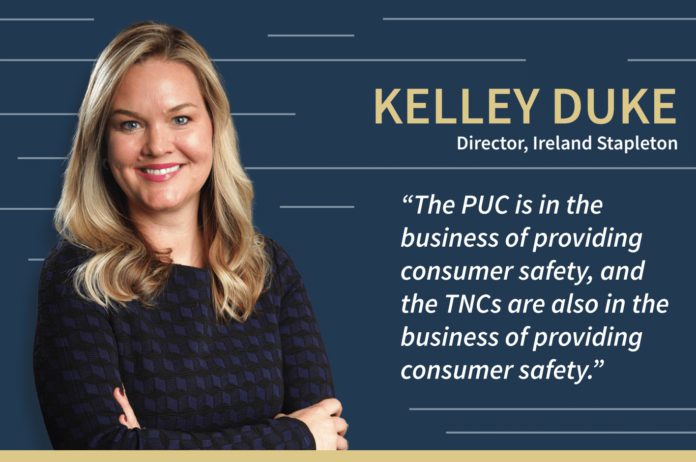 Kelley Duke literally helped write the book on Colorado’s regulations for transportation network companies. In 2014, Colorado was the first state to adopt a law regulating the companies, and Duke’s litigation and regulatory work in that space brought her to the drafting table for the regulations.

“It’s not like we could look to other states for regulations. … Colorado had to come up with its own regulatory framework, similar to what they did in marijuana, frankly,” Duke said.

Duke has a general commercial litigation practice at Ireland Stapleton Pryor & Pascoe, where she chairs the firm’s litigation practice, and her work includes a lot of disputes involving contracts, construction, real estate, oil and gas and shareholders. She estimated she takes two to three cases to trial each year. In addition, Duke does regulatory and litigation work in the transportation space subject to the Public Utilities Commission.

In that work, she represents transportation network companies, like Uber and Lyft, though she declined to name her specific clients. Duke said she enjoys helping the companies navigate safety regulations for drivers and customers.

“The PUC is in the business of providing consumer safety, and the TNCs are also in the business of providing consumer safety,” Duke said. “So finding a middle ground on how we can do that but push business forward … takes a lot of time and strategy in working with the PUC to create a partnership.” She said she prides herself on her work coming up with business approaches for her clients that help them avoid regulatory trouble and litigation.

Duke said understanding some nuances of the law can be complicated, such as how different parts of the transportation network company code overlap and the different penalties that apply for violations.

“Regulations are only as good as they’re written. Once you write them and get them in place, you kind of have to see how they work in reality … and then sometimes they need changing.” She said keeping in sight the PUC and company’s goals for consumers is the key in analyzing whether the regulations are working

Duke said people who know her would say she eats, sleeps and breathes litigation, but it’s not the only method of dispute resolution she’s good at. Duke also became an American Arbitration Association arbitrator in 2017, which she estimated makes up about a quarter of her practice.

“For parties that are looking to resolve their disputes, you have to ask yourself, ‘To what end? Yes, we can take this to the mat, but if we do, at what cost?”

In addition to money, she added energy and time also have to be considered as costs, and sometimes only lawyers win in the end. Duke said she likes her work as an arbitrator because it allows her to make decisions based on looking at both sides of issues.

She said she thinks about her work as an arbitrator as a long-term career strategy. While she loves her trial work, Duke knows there may come a time when she no longer wants to put in the long hours it takes.

“The point of being an arbitrator for me is to continue to grow my experience, so that in my career in the future when I don’t want to keep working 75 hours a week, I have some really awesome experience in particular areas that would be really helpful in resolving disputes in arbitration.”