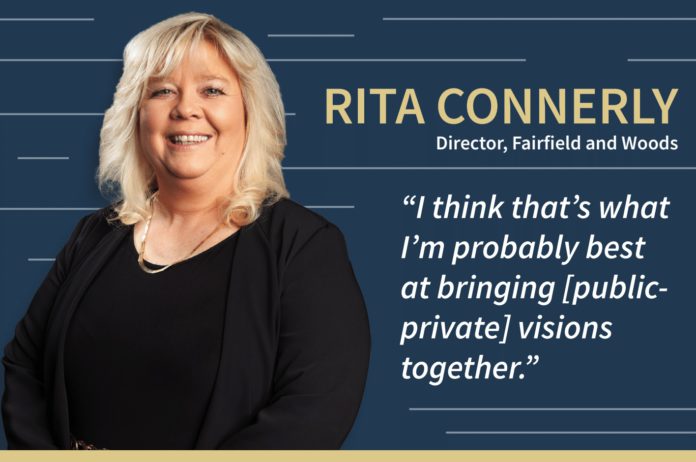 From where Rita Connerly sits, she can see a wealth of development opportunities east of Denver. And she happens to sit on not just the Adams County Economic Development Executive Committee as its chair, but she’s also chair-elect of the Aurora Economic Development Council Board of Directors.

These positions and others help Connerly, a director at Fairfield and Woods, to get a lay of the land in her real estate development practice. She also helps make connections between municipal governments and business players.

“It just gives me that opportunity to work not only with the developers but also the public officials to understand what their vision is for the community, and how we can bring the public-private community together to achieve those visions,” Connerly said. Being involved in community functions, she gets to “absorb what’s going on and who’s doing what.”

“I think that’s what I’m probably best at, is bringing those visions together,” she said.

For Connerly, 2018 was a year when some of those grandest visions finally did come to fruition. She’d acted as general counsel for the owner and developer of Gaylord Rockies Resort and Convention Center, which opened its doors in Aurora in December. At 1,501 rooms, the Gaylord Rockies is Colorado’s largest hotel.

The $800 million project faced concerns that it would cannibalize the state’s hospitality industry by drawing conferences away from Denver, causing the surrounding businesses to lose revenue. Connerly said the developers were eventually able to show that many of those concerns were unfounded. With more 1 million room nights booked before its opening, 80 percent of the conferences the Gaylord was bringing in hadn’t been to Colorado before.

Still, over the course of the development, the Gaylord Rockies overcame a handful of lawsuits and a bill that would essentially scuttle the project, to name only the legal obstacles.

If the Gaylord Rockies Resort project were a marathon for Connerly and her client, Houston-based RIDA Development Corp, then December was when they crossed the finish line. Thinking back to the grand opening, she said she was “filled with pride” for her client, which invested so much capital into the hotel “knowing that it would be a game changer.” She also felt proud of her role on her client’s team, which she described as identifying all of the possible obstacles throughout the project and preparing for them, she added.

The Gaylord Rockies, significant as it is, is an early step in a larger development plan Connerly is helping out with. The hotel will be an economic engine for the 21,000-acre planned “Aerotropolis” development south of Denver International Airport. Connerly had been working with Aurora, Adams County and a metropolitan district to get infrastructure plans and funding in place for the Aerotropolis. In September, the Aerotropolis Regional Transportation Authority broke ground on new roadways that would connect to the development.

“We had the opportunity to transform that area to make it a destination” Connerly said, “and the Gaylord needed to be there … to elevate that area so that way, we were no longer going to be just a suburb of Denver, and we were going to have our own identity that is Aurora.”

Connerly also co-chairs Adams County’s Aerospace & Aviation Taskforce, which promotes business for the Colorado Air and Space Port and the Aerotropolis development. She had been working for most of the decade to bring a spaceport to Front Range Airport in Watkins, which is about 20 miles east of Aurora.

In August, the Front Range Airport received a license from the Federal Aviation Administration to expand into a spaceport. The spaceport would be an aerospace R&D and education site, but it would also launch and land space planes for commercial travel.

When the FAA had begun handing out licenses for spaceports, and the Front Range Airport jumped on the opportunity. During the license bid, Connerly made several visits to the FAA in Washington, D.C., and “threw a lot of pro bono hours at it to get that application together.” Getting the license was yet another milestone from Connerly’s work last year that holds major economic potential.

“This gives us another opportunity to keep aerospace, and that business, as number-one in the state of Colorado on a per capita basis,” Connerly said.

While Connerly has been working on the spaceport project for most of the decade, that work is far from over. Construction on the Colorado Air and Space Port expansion is slated to start in five to eight years.

Connerly said she finds the energy to work on all of these massive projects by identifying with her clients and not just approaching the work as outside counsel.

“I understand the client’s objectives, so I internalize that, and then I implement them,” Connerly said. “I’m part of … the client’s team, so they don’t treat me just like a lawyer. They treat me like a main part of the management. I really think that that’s probably the role of attorneys … in the 21st century. We’re going to be team players.”