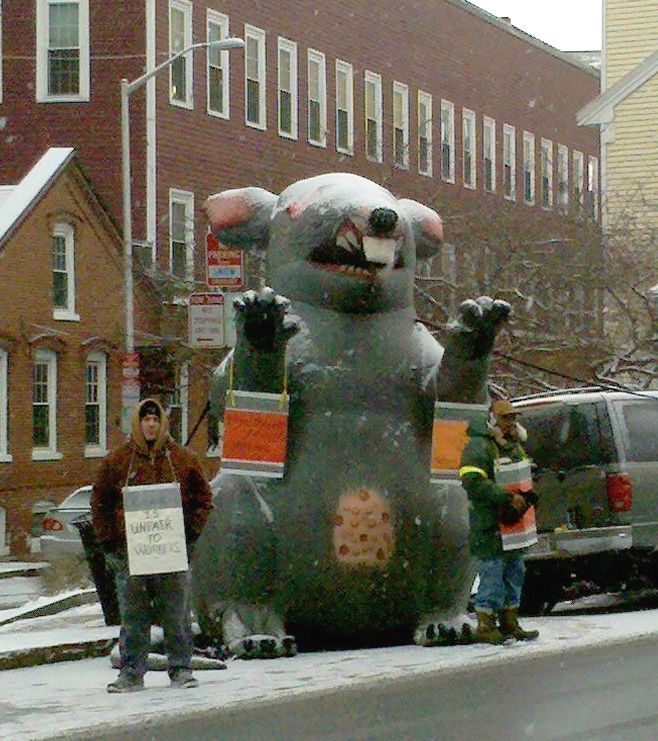 It has been a dramatic few weeks at the National Labor Relations Board. On his first day in office, President Joe Biden fired Trump-appointed general counsel Peter Robb. Days later, Biden named Peter Sung Ohr as the board’s acting general counsel. Ohr has already taken steps to roll back many of his predecessor’s policies, and lawyers have been watching his actions to divine what might lie ahead under Biden’s NLRB.

One of the biggest winners to emerge from the shake-up at the NLRB has been Scabby the Rat, the large inflatable rodent that often appears outside businesses and construction sites as a sign of protest in a labor dispute.

Robb had wanted to rid sidewalks, picket lines and protests of Scabby, Bloomberg Law reported in 2019, and he pursued multiple cases alleging that deployment of the balloon rat is a form of unlawful picketing. But on Feb. 2, Ohr filed a motion to dismiss a high-profile case about whether Scabby’s appearance at an RV trade show amounted to an illegal secondary boycott that puts pressure on employers not directly involved in the employment dispute.

“General Counsel Ohr is going to release Scabby from the very temporary cage that Scabby was in during the General Counsel Robb years, and Scabby is going to be out there in full effect,” said Sherman & Howard member Patrick Scully. “And I think that’s quite clear, based on [Ohr’s] action so far in abandoning that prosecution.”

According to Scully, Ohr’s motion to dismiss isn’t just a green light for Scabby but also a sign that unions will be free to engage in other forms of non-picketing protest, such as stationary banners and street theater, under Biden’s NLRB.

Biden had promised to be an advocate for labor on the campaign trail, but few had expected the swift and unprecedented replacement of employer-friendly Robb. Polsinelli partner Mark Nelson noted that Biden is the first president to fire an incumbent general counsel, and former presidents Donald Trump and Barack Obama both allowed their predecessors’ appointees to serve out the remainder of their terms. The decision to fire Robb also came quickly — just hours after Biden took office.

“This signals a very ambitious and aggressive agenda by the administration to make profound changes in current board law,” Nelson said.

“On the day of the inauguration, it strikes me that the White House should have had other issues more important than the NLRB’s general counsel during the first 23 minutes of the new administration,” Ballard Spahr attorney Steven Suflas said during a Feb. 10 webinar. “But I think that is a measure of the influence that organized labor is going to have in this White House.”

Republicans will remain the majority on the five-person board until August, which will delay some of the more drastic policy changes. But after Democrats secure a 3-2 majority, Nelson said, “I would expect them to be very, very active in reversing decisions that the union community thinks are very pro-employer.”

It’s not unusual for a new administration to bring reversals to NLRB decisions, and significant changes also happened under the Obama and Trump administrations, Nelson noted. “I think that is likely to continue for the unforeseeable future,” he added.

“The NLRB is on the verge of becoming an illegitimate agency because the substantive law is going to change so dramatically with each change in administrations at the White House,” Suflas said. “As a result, the opinions of the circuit courts of appeal are going to become more important as employers look for guidance as to what the governing legal principles are.”

Since his appointment, Ohr has rescinded a slew of Trump-era memoranda, many of which provide guidance on the handling of cases and investigations. Scully said a number of themes stand out from Ohr’s actions so far, giving clues about what’s to come.

The General Counsel’s Office is likely to try to reverse the NLRB’s 2017 decision in The Boeing Company, Scully said, referring to a landmark case that instituted a more lenient test for employer handbook rules and policies.

According to Scully, Ohr has also indicated there will be more lenience when it comes to unions’ duty of fair representation. In addition, he expects the General Counsel’s Office will be sympathetic to making it more difficult to decertify a union and will be less inclined to defer cases — the process by which the NLRB allows an employer and union to resolve issues through grievance and arbitration mechanisms rather than litigation.

Nelson said he expects a return to Obama-era “quickie” or “ambush” election rules allowing an accelerated timeline for union elections.

He added there are also concerns about the future of mail ballot union elections, which have been permitted during the pandemic but are disfavored by employers, who prefer elections to be held on their premises.

Suflas said that under the Biden NLRB, employers can expect a return to Obama-era precedent when it comes to speech. Under Obama, the board had ruled vulgar and abusive speech could be protected as long as it arose in the context of a union campaign or other protected concerted activity. The Obama NLRB had also held that employees with access to employer e-mail systems had the right to use those systems for protected purposes, such as union organizing.

Another area to watch, according to Suflas, is how the Biden NLRB will deal with the challenges employers face in balancing sensitivity to diversity, equity and inclusion issues and respectful workplace policies that could be inconsistent with the “expansive decisions of the Obama NLRB that went far afield on protected concerted activity.”

Non-union employers shouldn’t think the changes at the NLRB won’t apply to them, Suflas said. “The non-union sector of the workplace is going to see a return of Obama-era law, which [took] a sleepy old agency designed to deal with union-management relations and injected that agency and that law into the non-union workplace,” he said.