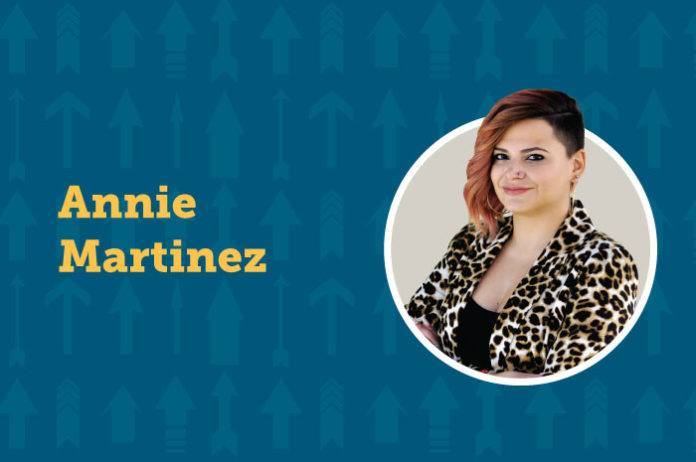 Annie Martínez calls her legal practice a “defense-minded practice.” Her solo firm, Bridge Legal Solutions, handles family, criminal and juvenile defense law, and often her cases are at the intersection of those areas.

She has a respondent parent counsel contract with Adams County to represent parents in dependency and neglect cases and describes her business as a “low bono, slow pay, low pay” and sliding scale enterprise.

“The kind of clientele I work with are the ones that usually have the biggest barrier to access justice through an attorney,” she said.

Martínez grew up in Miami as the child of Cuban refugees — her father arrived as part of the Mariel boatlift in 1980 — and is the first person in her family to graduate from college. There were many occasions when she wished her parents had been able to hire an attorney, she said, “so that’s really what pushed me to work in areas that are maybe not as glamorous and with clientele who are not as glitzy.”

After finishing law school in Florida, Martínez knew she wanted to leave the state. She chose Colorado “sight unseen” and drove west, settled in, sat for the bar exam and started practicing law in 2016. “I really just decided that I was going to make this my home,” she said.

One of the first things she did after arriving was to get involved with the Colorado Hispanic Bar Association, an organization she now leads as president. Her CHBA activities led her to her first job at Hernandez and Associates, where she practiced a mix of immigration, criminal and family law. She quickly realized immigration law wasn’t for her but fell in love with family law and criminal defense.

After about a year, she joined a firm focused on family law and guardian ad litem work, which introduced her to the dependency and neglect world.

“The law is still pretty new in Colorado in that area, compared to, say, criminal defense,” Martínez said. “Half of our cases go to the Court of Appeals and even higher because there isn’t that clear law yet. So, you have this exciting opportunity to create new law and be at the new frontier of making these arguments.”

During the year she was at that firm, she learned she prefers representing parents rather than children in the types of cases she takes on because, she says, “I felt that you do better work reunifying that way.” So she applied for and won a contract with the Office of Respondent Parents’ Counsel.

The work allowed her to hang her shingle and be her own boss. “That was a big thing for me about wanting to go to law school — I wanted to work for myself,” she said.

“I couldn’t be happier doing this line of work. I think it brings out all my strengths, and my negatives don’t have to come in for this type of work,” she said. Martínez believes those strengths include courtroom argument and helping judges, clients and case workers overcome language and cultural barriers.

One of the cases she’s most proud of this year was a hearing to determine whether to remove children and put them in foster care. Another attorney saw Martínez in a hallway and asked her to take the case because she was the perfect person to bridge the culture gap between the family and caseworkers, who were concerned for the children’s safety because they had smelled marijuana at the home and the parents failed to open the door during a visit.

“I gave a pretty lengthy argument about how we’re balancing harms here, and we have to keep sight of the fact that everybody’s families are different,” Martínez said. “You have to factor that in. This is a brown family. Some of them are first generation. They’ve grown up poor. The stuff that you’re saying is unsafe is not really unsafe to them.”

Another recent success was a protection order case from Project Safeguard in Arapahoe County. Martínez represented a young woman who was seeking a permanent protection order against an ex-boyfriend who was threatening her and had showed up to her workplace to intimidate her. The client was nervous and upset ahead of the hearing, but Martínez prepared her for testimony and she was granted the order by a “notoriously hard judge.”

“She was crying, and her fiancé was crying — everybody was happy crying. And it just felt really good,” Martínez said. “Because she was like, ‘We’ve been here three times in four years, and this is the first time we won.’”

In her line of work, all the wins “feel really big,” Martínez said, whether it’s stopping the removal of children from a home or helping a client get in-person family visits rather than Zoom calls with their kids.

“Everything just feels really good,” she said. “The lows are really low, too. But every win is just like one little more chip away at the system.”

Martínez doesn’t shy away from leadership roles, either. She is one of the youngest people to serve as CHBA president. And in 2019, she launched a bid for Denver City Council, earning about 15% of the vote against candidates with far more money.

“It was really cool,” she said of running for office. “I hope to do it again. I’m not sure when or what.”

One of the issues she ran on was opposing the city’s camping ban, and she spent much of her campaign educating people in the community about the ban and explaining why they should oppose it. More recently, she rallied the CHBA and other local bar associations to pressure the Colorado Supreme Court to keep the state’s eviction courts closed during the pandemic.

“They didn’t do it,” she said, “But I thought that was a really, really unique coming together to ask them something that I don’t think the bar associations have even done before.”

Housing issues are personal to Martínez, who ended up couch surfing and sleeping in her car for a while after a bad break-up a couple years ago. Her mother begged her to return to Miami, but Martínez was determined to persevere in Colorado. “I’ll survive. I’m better off than most. I’m sleeping in a nice car,” she reassured her mom. “It could be way worse.”

Martínez’s tenacity and resolve power her through a demanding caseload, volunteer and pro-bono work through her firm and organizations such as Mi Casa Legal Clinic, Project Safeguard and the National Lawyers Guild.

On top of it all, she’s completing an online PhD program in public policy and administration, with a focus on criminal justice. Martínez said her practice and running for office have taught her that while she has some of the tools needed to recognize problems and offer some solutions, there’s still more to learn.

“I don’t think I know everything yet,” Martínez said. “And I really wanted to get a better understanding of how policy is made, how that’s influenced, and how people work in that area.”