Collective bargaining agreements are usually negotiated between employers and companies but also have a unique place in the realm of professional sports. Although the majority of negotiations focus on salary and other compensation components of a contract, things such as division of league revenues, free agency and disciplinary rules come into play as well. And while bargaining about monetary aspects and benefits applies to most other industries, multimillion dollar sponsorships, medical risks and commercial profit present unique challenges for each side when entering into negotiations for sports leagues.

One of the biggest differences for CBAs in sports is that each individual player is represented by an agent and has a contract with the team. Compared with a company like UPS, the largest employer of Teamsters, this is unique. Contracts vary from player to player in many aspects, and each has to be league-approved.

“Many are significantly different in terms of what they can do in terms of other activities like off-season activities, they’re very highly regulated,” Perkins Coie partner Mike Reynvaan said. Reynvaan has handled many collective bargaining agreements and  has previously worked with sports organizations such as the Seattle Sonics.

CBAs for an entire league set minimum salary standards also, so a player’s individual contract with the team cannot be lower than what’s in the league agreement. Another big difference and consideration in sports is sponsorship and endorsement money, which Reynvaan said complicates matters, as compensation can range from $500-600,000 to upward of $30 million a year for big name players. Those agreements provide income that’s entirely separate and therefore not regulated by the league, which creates a more complex agreement between more parties than just a company and its workers.

Player contracts also tend to be significantly shorter than in other industries. The average career in major league sports ranges from three to six years, depending on the sport, so the focus on how high a player’s salary can be is upfront rather than a gradual increase over time like company employees. Reynvaan said that on the flip side though, individual players coming in as rookies don’t have as much leverage in negotiation, which allows the leagues to keep salaries relatively low.

Reynvaan said media revenue is another big consideration that’s changed rapidly over the years as media sources have become diversified and more money is being paid to them.

“Before, the league would negotiate a contract with CBS, so CBS Sports would carry NBA basketball for five years and then broadcast rights would be part of that, and that can be hundreds of millions of dollars. I think that’s the biggest change financially,” he said.

The current NFL agreement is good for 10 years and set to expire at the end of 2020. But signs point to another lockout similar to the 2011 dispute that led to a 132-day standoff between the NFL Players Association and the league. Capital Sports Advisors managing partner Jack Mills said if a player’s leverage is strong enough, he may be able to have a guarantee that would cover him during a strike, but that’s unusual. The NFLPA has recently recommended that players start saving money now for a possible 2021 lockout. As the NFLPA begins to look ahead to upcoming negotiations for the athletes, things like commissioner disciplinary power and off-the-field conduct have been highlighted as possible hot button issues.

Reynvaan said the discipline and discharge process is approached differently in sports. Most CBAs have a cause provision that determines fireable offenses, but these terms are quite loose and often lenient for players. Reynvaan gave the example of Former Golden State Warriors player Latrell Sprewell, who choked his coach in 1997 and was initially only suspended for 10 games without pay until public outcry forced the team to void the remainder of his contract. Sprewell arbitrated the case and was ultimately suspended for the rest of that season. 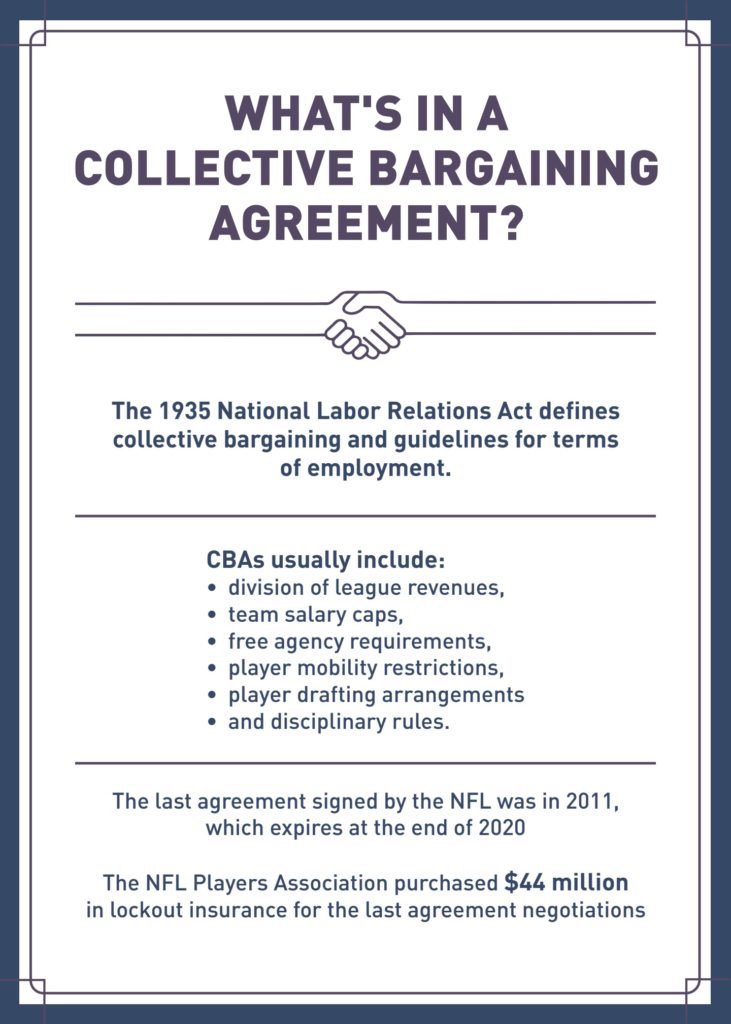 Reynvaan pointed out Sprewell likely would have been gone under any other collective bargaining agreement with an employer.

“In professional sports you have the players who are the talent, the draw,” he said. “So it’s much more difficult to think about disciplining someone during the season when if they miss a few games, it would affect crowd revenue, could affect their playoff chances. That’s a very different dynamic than the normal unionized workplace.”

Decisions from professional league commissioners, including disciplinary ones, are also not really able to be reviewed, whereas other disputes between an employer and a union would usually go to arbitration. Ultimately, commissioners work for the owners but also hold a good deal of disciplinary power, so they must navigate the relationship carefully.

“One of the biggest bones of contention will be the commissioner’s power to discipline,” Mills said. “There’s a lot of dispute in football in how far the commissioner can go in disciplining players and how many games a player can be ineligible for.”

Reynvaan said the increased focus and criticism of concussion protocol in all major league sports will also likely resurface in upcoming CBAs with regard to medical safety and benefits for players.