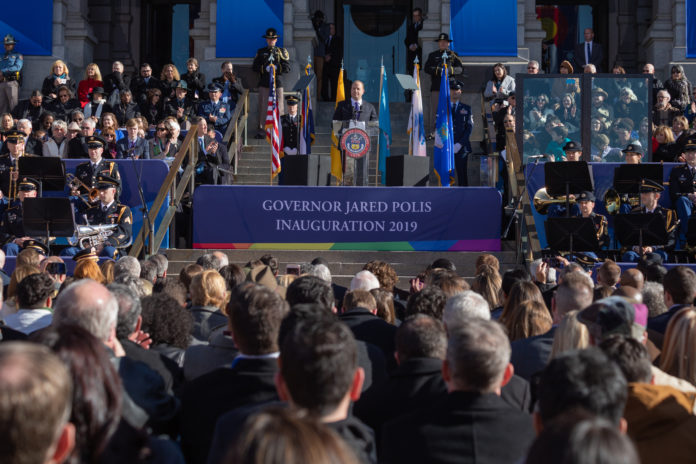 On a Tuesday morning with sunlight warming the steps of the Capitol, Jared Polis shed the suffix “-elect” from his title and gave his first address as Colorado’s 43rd governor.

Different features of the inauguration ceremony were a nod to facets of Polis’ identity that have made his election historic. The Denver Gay Men’s Chorus performed as ceremony guests filed in to find seats, and the inauguration ended with a Jewish prayer. In between were speeches by religious and spiritual leaders, poets and state legislators.

“I must begin by saying I am very conscious of the fact that there were many brave people over the years who made it possible for someone like me to be standing here giving a speech like this,” Polis said.

He and other speakers addressed the importance of returning to America’s roots as a melting pot of cultures and identities, and to Polis’ election as a counterpoint to the current divisiveness in the U.S. In a poetry recitation that read like a call to arms, Poet Anne Waldman referred to a “victory reality.”

“Let’s help turn this torched, troubled nation around,” she said. “Transparency as opposed to insularity, leadership and compassion as opposed to exploitation, cynicism and cruelty.”

Colorado Supreme Court Chief Justice Nathan Coats gave the morning’s oaths of office. New Secretary of State Jena Griswold, Treasurer Dave Young and Attorney General Phil Weiser were sworn in along with Polis. And John Hickenlooper gave his last speech as governor. Hickenlooper reflected on how he saw Colorado change during his eight years in office under difficult periods such as the Great Recession, the catastrophic flood of 2013 and the Aurora theater shooting. But the resolve of the state’s people never broke, he said.

“I saw broken bridges and roads, but I didn’t see a single broken spirit,” he said. Hickenlooper leaves Colorado’s highest office with the economy still growing at meteoric speed. His legacy is also memorable because of he opposed marijuana legalization, but then after the 2012 vote on Amendment 64, Hickenlooper was tasked with overseeing its implementation.

He thanked the people of Colorado for his chance to lead them and described Polis as a well-suited successor.Polis ran his gubernatorial campaign on platforms of expanding full-day kindergarten and preschool, lowering healthcare costs and fighting climate change. During his inaugural address, he acknowledged the struggles for to afford basic necessities even as the state’s economy booms. Rampant gentrification, real estate construction that’s proliferated like dandelions and rising living costs have made it difficult or nearly impossible for some to buy health care, afford homes or save for retirement.

“Our mission now is to make Colorado a place where all families have the chance to thrive: Today, tomorrow, and for generations to come,” he said. “My parents showed me what the American dream is all about. They showed me what the Colorado dream is all about. They showed me how important it is to seize opportunity, to dream big dreams and to work toward something great, not just when it is easy — but especially when it’s hard.”