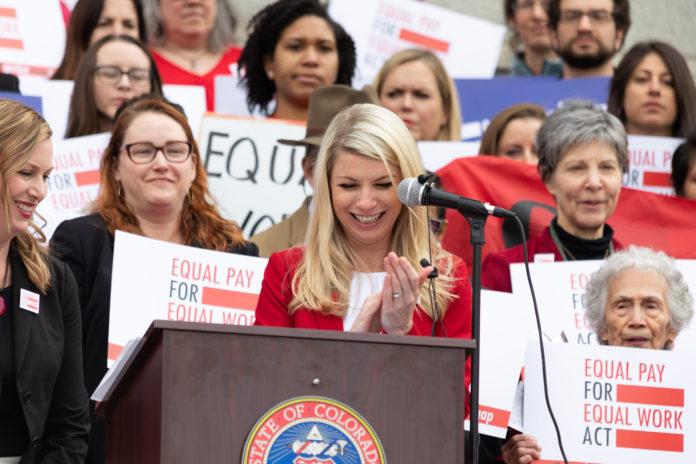 More than two months after its introduction, the Equal Pay for Equal Work Act awaits passage by the full Senate. It passed final reading in the chamber Thursday. To re-energize support for Senate Bill 85 as it took its final steps through the chamber, the bill sponsors and the Colorado Women’s Bar Association held a rally Tuesday on the Colorado Capitol’s West steps. Supporters wore red and took turns speaking not only about how they have felt the economic effects of a gendered pay gap that has persisted for generations but also that their young daughters will feel the effects well into their working lives if the gap is not addressed.

“I’ve watched my efforts to pass these measures fail in a Republican-controlled Senate,” Sen. Jessie Danielson said. “But each day as [my daughter] grows, I become inspired to keep up this fight. Not just for her, but for all Colorado daughters.” She has sponsored Senate Bill 85 alongside Sen. Brittany Pettersen.

Measures related to equal pay in recent legislative sessions have mostly come down through the House before dying in the formerly Republican-controlled Senate. In 2015, House Bill 1133 to indefinitely extend the life of the Colorado Pay Equity Commission died in the Republican-controlled Senate. The commission was created in 2010, and sunsetted in the summer of 2015.

The Republican-controlled Senate also killed three bills related to pay equity in 2016. House Bill 1166 would have barred employers from asking about applicants’ salary history. House Bill 1156 would have prevented all employers from retaliating against employees who discussed their pay with each other, striking existing exemptions for some employers from discrimination laws. And House Bill 1001 would have required bidders for state contracts to keep records on employee pay by race and gender, and those businesses would have been responsible for their subcontractors’ compliance with pay standards statutes as well.

But another bill that extended the bar on retaliation against employees for discussing their pay to include all employers passed in 2017.

A pair of House bills to address pay equity and banning queries about salary history, 1378 and 1377 respectively, died late in the 2018 legislative session.

A key difference between Senate Bill 85 and last year’s pay equity bill narrows the possible justifications for a wage differential. In addition to seniority, merit or having a system that measures earnings by “quantity or quality of production,” the 2018 bill included a fourth bucket for “bona-fide” job-related reasons besides sex. Senate Bill 85 does not include that last category.

The Senate Judiciary Committee approved several amendments to Senate Bill 85 when it first heard the bill late in February. CWBA president-elect Sarah Parady said among them, the change in the number of years employees can recover back pay from six in the introduced bill to three is the one the bar association hopes the House will reconsider it when it passes that chamber.

“[Pay inequity] compounds over the course of a woman’s career, but it may not be a huge number every single year,” Parady said. “So the difference between six years and three really cuts up that recovery and makes it a lot more minimal than what women actually experience over the course of their careers. … We feel like a six-year recovery period is actually pretty modest considering how pervasive some of these gaps are.”

Another amendment pushed the law’s effective date back to Jan. 1, 2021. A third expanded justifiable reasons for pay disparities, including geographical, educational, seniority and merit-based factors.

Some high-profile local and national cases highlight issues related to pay parity that Senate Bill 85 seeks to address. DU Law professor K.K. DuVivier, who spoke in support of the measure at the rally, was one of seven litigants in the EEOC’s lawsuit against the school, which the EEOC found had systematically paid full women law professors less than their male colleagues.

As one example of the pay disparity, the EEOC’s complaint against DU outlined evidence that the school paid DuVivier the same as a male colleague despite her superior qualifications. The school hired them at the same time as assistant professors, and DuVivier also was brought on as director of DU’s Lawyering Process Program. The complaint alleged her male colleague also received a higher merit-based raise despite DuVivier’s better performance in scholarship and service.

Senate Bill 85 also addresses pay transparency, another issue that came up in the EEOC’s lawsuit against DU. The bill requires employers to announce openings to all its employees, including salary ranges. The women professors at DU did not know for years that they received less than their male colleagues. The litigants and attorneys said after the case’s settlement they hoped the pay transparency measures the law school agreed to would spread elsewhere in the university and set an example for private employers.

In February, the U.S. Supreme Court overturned a high-profile decision from the 9th Circuit in Rizo v. Yovino, which ruled the Equal Pay Act doesn’t justify pay disparities between men and women based on salary history. The Supreme Court vacated the decision because Judge Stephen Reinhardt died a few days before it was released, while the case was technically still pending. Reinhardt had written the opinion for a 6-5 majority.

Attorney Charlotte Sweeney, who represented some of the DU professors and has worked on pay equity issues on behalf of the CWBA for several years, said the fate of Rizo v. Yovino is an example of the importance of states passing their own laws.

“Most people are doing the right thing,” Sweeney said. “And this is going to encourage people to look at what they’re doing and make sure people are paid equally.”