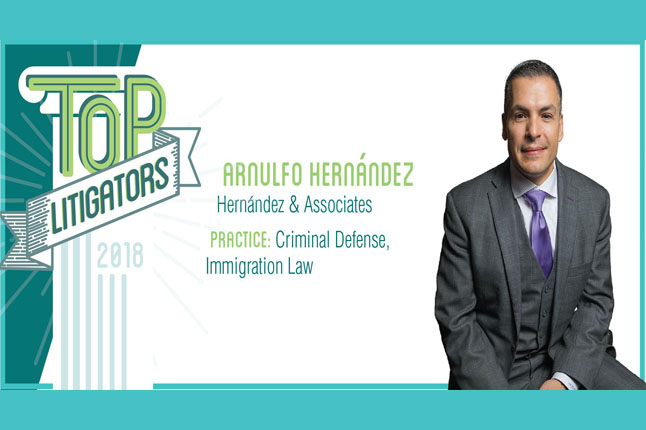 For Hernández & Associates managing partner Arnulfo Hernández, his path to criminal defense and immigration was born of a desire to give others a second chance.

“He strives for justice and fairness in the legal system for others,” Hernández & Associates shareholder Christine Hernández wrote to Law Week. “Through his trial practice, he champions causes that are foremost in our country and advocates for those who might not have a chance to succeed on their own.”

Hernández stresses that his success is not the result of his own individual effort. He credits the role of teamwork in many of his significant cases. One prominent case was that of Ms. Morones, who pled guilty to impersonation and was deported after living in the U.S. for more than 20 years. Hernández was successful in appealing her case to the Colorado Court of Appeals and was able to get her an evidentiary hearing for post-conviction relief.

“That is the importance of our law firm and why we handle both,” he said. “One misstep on the criminal side is going to have lifelong collateral consequences on the immigration side that unfortunately people don’t pick up on.”

Before combining his immigration practice with defense, Hernández worked in the Colorado Attorney General’s Office with former Colorado Attorney General Ken Salazar and former deputy attorney general Don Quick. Hernández worked in the Foreign Prosecution Unit, where he mostly prosecuted  immigrants from Mexico who had committed serious crimes such as murder.

At the time, because Colorado’s capital punishment laws didn’t mesh with those of Mexico, the state had an agreement that Mexico would not extradite but would prosecute those cases there. This laid the foundation for Hernández’s fusion of criminal defense and immigration.

Hernández had an opportunity to join Salazar and Quick when they moved to the Adams County District Attorney’s office, and “thought long and hard about it” but realized his heart was in defense.

“I believe that we’re human and we make mistakes, and we’re entitled to live up to our full potential and make reparations and look beyond those mistakes,” he said. “Most people aren’t these career criminals that we fear in our nightmares. Most people want the opportunity to get their life back together.”

Hernández is Mexican and holds his culture close. He attended college in Mexico and worked in the prosecutor’s office in Guanajuato. There he gained an understanding of how the system works, and immigration became a natural fit. He started out helping immigrants adjust their legal status in the U.S. and for any individuals who had criminal charges, he sought to make sure those issues wouldn’t be an obstacle to immigration relief.

Hernández has the perspective of working in defense and immigration under three presidential administrations so far. While some aspects have stayed par for the course regarding raids and deportation, he’s noticed some notable shifts in approach for the Department of Justice under the Trump administration.

“Now, the trial attorneys that work for ICE, they don’t communicate with us anymore,” he said. “It used to be a more collegial system, where if we had a case [they would] tell me, ‘Look, I don’t have an issue with X and Y, I have an issue with Z.’… That doesn’t happen anymore.”

Although there is a substantial case backlog nationwide — to the tune of more than 650,000 cases — Colorado’s federal immigration court has been one of the worst in recent years with significant delays. Hernández said he feels this lack of communication has caused cases that should be relatively straightforward to be drawn out. Hernández said he and his team are finding that more immigrants are being detained with no bond holds, whereas before that wasn’t usually the case.

“The law hasn’t changed, I want to be clear about that. The law is still the same,” he said. “The application of the law has changed a little bit in that now every immigrant is a flight risk, now every case needs to be litigated to its fullest extent without the luxury of administrative closure.”

There’s no one-size-fits-all approach in immigration representation for Hernández. He appreciates the opportunity to be creative and enjoys exploring different methods for relief. For Hernández, the law is not black and white.

“If it were, I’d be out of a job, especially with this administration,” he said. “That’s the fun part, that’s what opens the door to a new way of seeing a problem and handling a problem.”

Hernández said he isn’t focused on how a specific law has been treated and interpreted in the past but rather why it should be read in the way he proposes for his client. He feels that sentencing reform and implicit bias are some of the most pressing issues in criminal justice that need to be addressed.

“We grow up with this notion that justice is blind. That is not true,” he said. “I would like to see people actually come to the table and speak about these implicit biases they may have. Ignoring them is doing a disservice to the client. They’re prevalent in our justice system.”