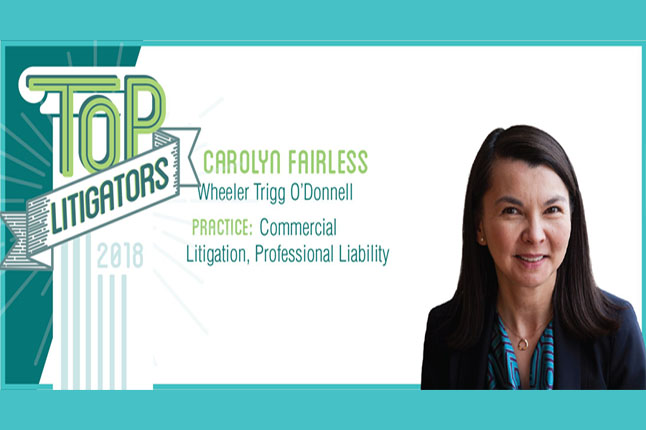 Part of trial preparation is being ready for the unexpected. And sometimes that includes adjusting when a second-chair falls ill mid-trial.

Carolyn Fairless, managing partner of Wheeler Trigg O’Donnell, is a trusted defense attorney. In addition to her career of accolades, she had a standout year in 2017 that included three trial wins and an arbitration award. Starting in the spring of 2017, Fairless won a significant case nearly every other month. And with a track record like that, Fairless said her success comes from the team she surrounds herself with.

Top cases for Fairless last year included defending an AmLaw 200 law firm in a legal malpractice case valued at $500 million but resulted in a dismissal as well as coming in late in the litigation process for an auto parts manufacturer that resulted in a total defense victory in trial.

In the total defense win, Fairless and her WTO team joined the long-running case about six months before its latest trial date. At that point, it had already been appealed and reversed twice.

For Fairless, coming in late in litigation is an opportunity to solve a puzzle — she said she enjoys the chance to think creatively and approach a set of facts from a new angle — as well as an exercise in building a positive relationship.

“I think there’s a trick to coming in as the new person, working with the person who lived with the case for a long time and working with them cooperatively,” Fairless said. It’s important to make the existing counsel know they are still valuable to the case since they’re the ones who attended depositions, met the witnesses in person and know much of the information that will still be useful in taking the case forward.

“This isn’t a statement about them, this is a statement that the client wants to have more experienced trial knowledge now that it is going to trial,” Fairless said. “It’s important to keep relationships going smoothly to make sure the client is getting the best service they can from my firm and the firm living the case.”

And that trial experience paid off. Fairless said she surrounds herself with a skilled team, and that worked out in her side’s favor. When the plaintiffs called a witness that turned into a cross-examination that helped the defense, Fairless made a strategic move to leave out two witnesses of her own.

She knew one of the jurors had relevant knowledge that filled the purpose of one witness, and following the favorable cross-examination, she thought calling her own witness would have only provided the plaintiffs with an opportunity to have a successful cross-examination of their own. She was concerned her side would have been worse off having her witness testify than simply annihilating the other side’s expert. And her client trusted her experience.

“It was a brassy move, but it paid off,” Fairless said.

Her team’s trial experience was also relevant when her second-chair associate fell ill after the second day of trial. When it turned out he needed to be hospitalized for appendicitis, Fairless was able to have a trial presentation expert from WTO come from Denver to Kentucky, and Fairless was flexible enough to rework her arguments for the next day so that she could accommodate the fact that she was acting solo and unable to display exhibits until the trial presentation expert arrived.

“It all goes down to being super prepared to deal with things when they happen,” Fairless said. “And having a great team around you because they will save your bacon.”

That team approach is what allows her to find success. She described her 2017 as an “extraordinarily busy year with a lot packed into a short period of time.” Nobody does anything by themselves, she said, and her success is due to the help she gets from those around her.

As an individual, though, Fairless has developed a reputation for explaining complexities of a case without getting lost in the details and for being able to win over a jury.

As a former computer programmer, she has a handle on getting to the logical core of an issue. Her love of puzzles and an analytical mind make her well equipped to handle such things. And as for winning over a jury, it could just be her demeanor shining through.

“I don’t think being nice and being an effective trial lawyer are mutually exclusive,” Fairless said. She believes being courteous and professional are simply the right thing to do — and when you’re not, you can never know who might be watching. As someone who often finds herself the only woman in the room, she might be more noticeable. But being nice and courteous is just who she is. That often works to her favor.

“It makes practicing law a lot more enjoyable,” She said. “I try to be reasonable, I try to be compassionate, I try to accommodate reasonable requests [the opposing side] might make. And it tends to come back to you.”

In approaching a jury, she also said preparation is key. She learned early in her career that relying too heavily on notes can end up alienating a jury. “I learned the lesson the hard way early on that it’s not effective to be wedded to the paper and found the confidence over time to divorce myself from the paper,” Fairless said.

And besides, you never know when something unexpected might happen.