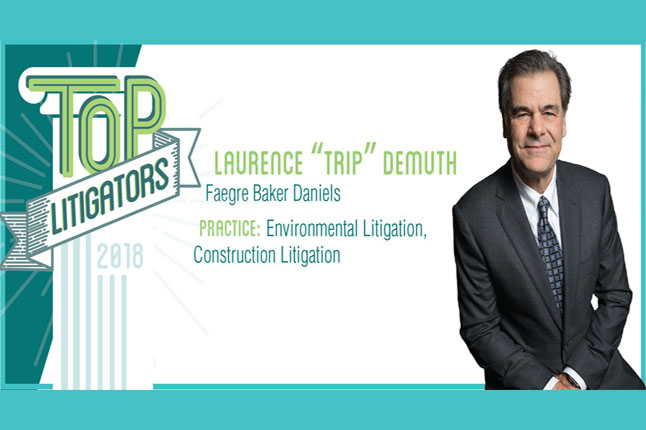 It’s one thing to lead or supervise five big civil cases in a year. It’s another to win or favorably resolve them all.

For Laurence “Trip” Demuth, 2017 was an exhausting but a satisfying year considering how he and his Faegre Baker Daniels team handled several “short-fuse” cases in quick succession.

For three of the cases he was first chair, and for the other two he took on more of a supervisory role and fostered success among the other lawyers. But overall, handling the five impending trials was a stress test for case management and teamwork.

“The fundamental thing is, I could not have done all five of these cases if had not been delegating the responsibility that I had,” Demuth said.

In the case that went to trial, FaegreBD represented Stewart Title Guaranty Company in its fraud claims against a Boulder homeowner that led to a jury verdict victory for Demuth and his team. Firm partner Rhyddid Watkins first-chaired the trial.

STGC claimed the defendant, in selling his $500,000 home, misrepresented in paperwork that no unpaid judgments or liens were on the home, yet in reality the home was subject to a $1.5 million judgment to STGC’s insureds. Litigation broke out once the home was sold and the lien was discovered, and STGC sued the Boulder resident for breach of contract and fraud. A jury would award STGC $500,000 in damages — and one dollar in punitive damages.

But that dollar was all STGC asked for. Demuth’s team argued that STGC had proven the fraud beyond a reasonable doubt and was entitled to punitive damages, he said. Yet so often in litigation, the insurance company carries the reputation of the bad guy, and STGC wanted to convey that it was a “compassionate, fair-minded title insurance company,” Demuth said.

“And one way that we could definitely show that to the jury is to say, ‘Look, we know we’re entitled to punitive damages, but we’re only going to ask you for one dollar.’ And that’s exactly what they gave us.”

Demuth represented STGC in another case last year, defending against a title agency’s allegations of breach of contract, civil theft and other claims, which amounted to more than a million in alleged damages. Demuth oversaw the case while associate Megan Farooqui would take it to mediation and achieve “a very satisfying result” for STGC, he said.

Demuth first-chaired the defense of American Family Insurance in a case it won in an eleventh-hour dismissal.

Demuth and Watkins were ready to try the case after only three months of preparation, and Demuth delegated to FaegreBD counsel Matthew Clark to write the motions. Days before trial, the court ruled in American Family’s favor on all motions, resulting in a complete defense.

“We essentially won the case on the steps of the courthouse mere days before the jury trial,” Demuth said.

Also in 2017, Demuth’s team defended a businessman against a raft of claims including negligent misrepresentation following the sale of a storage facility. The plaintiffs sought more than $1.6 million in damages, but they agreed to settle at $50,000 weeks before the trial.

The team also took on a bad faith breach of insurance contract case that had been decided in summary judgment, and they had three months to prepare for the trial over the millions in potential damages against their client. They were able to resolve the case in a favorable settlement.

The secret of good trial work, Demuth said, is not to view it as a performance — better or worse opening statements, closing arguments or cross examinations — but trying to find the truth of the case and articulate it to the jury.

“The jury wants to find the truth,” he said. “You give me the best lawyer in the world [to argue against], and if I appeal to the truth with that jury, I’m going to win.”

Many civil attorneys, as part of their defense, try to “explain away” or excuse the client’s behavior the plaintiff alleges. But that’s not Demuth’s approach; he instead seeks to clearly delineate for the jury that his client is right and the other party is wrong, and he said that attitude might be influenced by his time as a prosecutor.

Demuth came up in the Boulder County District Attorney’s Office, where he was given lots of responsibility early. “The first day that I showed up in the DA’s office, they handed me a case and said, ‘Go try it.’ ” Unlike BigLaw firms, government offices don’t have the luxury of training up trial lawyers for a decade before giving them significant responsibility in cases, he said.

Carrying that principle over to his civil litigation practice, Demuth expects much from the attorneys he leads. He’s comfortable delegating to them heavy lifting that other senior partners in BigLaw might not.

“If you trust people with responsibility, they tend to rise to the occasion,” he said.

In a year of pre-trial sprints and complicated cases, trust turned out to be the key to consistent success for Demuth. “It really does boil down to building a team of lawyers that all get along extremely well together, all trust each other, all work really well together.”

At the end of the year, the team had a dinner at Farooqui’s home, and the team presented Demuth a gift to recognize his leadership role — a TripAdvisor T-shirt. “As cute as that is,” Demuth said, “it does really sort of sum up the year.”