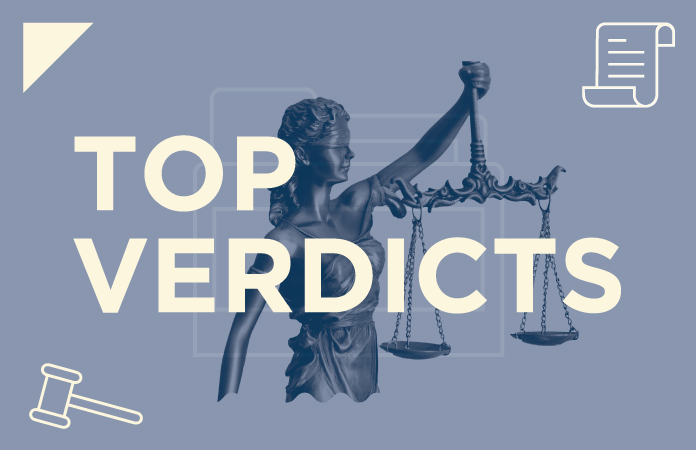 Jury trials have returned to the state and the top verdicts in 2021 reflect not only the uptick in trials and court activity but a general return to normalcy as industries flex following two years of pandemic operations and woes. Notably, more than half of the top 10 verdicts last year involve breach of contract claims and business disputes, something we’ve heard from legal experts this year is likely to continue as a trend. The rest of the list includes verdicts in medical malpractice, personal injury and wrongful death cases.

The following case information was collected and shared with Law Week by The Jury Verdict Reporter of Colorado.

The dispute began after McWhinney lost the Promenade shopping center to foreclosure in late 2009. McWhinney filed a lawsuit against Poag & McEwen in May 2011. During the earlier court process, McWhinney uncovered evidence of a complex fraud committed by Poag & McEwen’s three individual owners. But the state court lawsuit was too close to trial to amend to add new claims and parties.

After obtaining a $42 million state court judgment in 2017 against one of Poag & McEwen’s subsidiary companies for breach of contract, McWhinney hired Hanson Bridgett to pursue Poag & McEwen’s three owners in federal court for fraud, concealment and aiding and abetting liability. Before trial, McWhinney’s claims survived several challenges raised by Poag & McEwen’s owners including motions on the economic loss rule and the responsibility of officers, directors and managers of limited liability companies under Delaware law. G. Dan Poag and Joshua Poag settled with McWhinney before the federal court trial. McEwen’s affirmative defenses included statute of limitations, contributory fault/fault of others and a lack of knowledge of, or participation in, the fraudulent scheme.

On July 19, 2021, the court entered judgment in favor of McWhinney Holding Company, LLLP, McWhinney Centerra Lifestyle Center, LLC and Centerra Lifestyle Center, LLC and against McEwen for $23.4 million on the claims of aiding and abetting breach of fiduciary duty, fraudulent concealment, fraudulent misrepresentation and civil conspiracy. McWhinney was awarded $12,362,860.65 in prejudgment interest plus costs. McEwen filed an appeal.

Defendant’s Attorney: Rita Booker of the Law Office of Robert B. Hunter

On Sept. 1, 2019, Justin Gorodess was exiting the on-ramp from I-225 to southbound Yosemite and was in the process of making a left turn when his vehicle was T-boned on the driver’s side by a Toyota SUV driven by Sherozjon Vahobov. Justin Gorodess was killed on impact.

Beata Gorodess, Justin Gorodess’ mother, brought this action for wrongful death and claimed emotional upset, grief and loss associated with the loss of her adult son who was 30 years old. Justin Gorodess was a nuclear chemical engineer and was survived only by his natural parents. Justin Gorodess’ father was voluntarily dismissed from the case immediately before trial.

Beata Gorodess alleged that Vahobov ran a red light and seconds before the collision was driving more than 100 mph in the posted 35 mph zone of Yosemite. Beata Gorodess claimed that the defendant’s speed at impact was more than 55 mph. Vahobov said evidence showed he was driving 99 mph on Yosemite until roughly four seconds before the impact when he slowed to 55 mph hour which was the speed at impact with Justin Gorodess’ vehicle. The Denver Traffic Investigations Unit of the Denver Police Department ascertained speeds of Vahobov’s vehicle by downloading black box data from the car after the collision.

According to Vahobov’s attorney, on the Friday before trial, Beata Gorodess attempted to amend the complaint to add a Family Car Doctrine claim against Vahobov’s parents, and the court denied that motion.

Beata Gorodess was 62 years old at the time of the trial and didn’t seek any economic recovery. In closing, Beata Gorodess requested $115 million according to Vahobov’s attorney. Beata Gorodess offered to accept the $25,000 policy of insurance but required the insurance company to also produce the defendant for a deposition, and required two-years of tax returns and completion of Rule 69 interrogatories according to the plaintiff’s attorneys.

The court denied Beata Gorodess’ motion to lift the wrongful death cap for felonious killing. According to Vahobov’s attorney, the $436,070 statutory cap on non-economic damages applied.

MarkWest Liberty Midstream & Resources, LLC, gathers, processes and transports natural gas. In March 2018, MarkWest contracted with Meridien Energy, LLC to construct an 11-mile section of a 28-mile natural gas liquids pipeline in West Virginia. MarkWest alleged it terminated the fixed price contract on Oct. 16, 2018, based on Meridien’s failure to move forward with the project and on significant environmental violations.

Meridien alleged it acted reasonably and in accordance and compliance with the parties’ agreements and all applicable law, regulations and industry customs and standards. Meridien claimed MarkWest delayed Meridien’s work and made it impossible for Meridien to maintain its work schedule and meet the project deadlines. Meridien also alleged MarkWest wrongfully terminated the contract and failed to compensate Meridien for services and materials provided and failed to pay delay or suspension damages. Meridien counterclaimed for damages. MarkWest generally denied Meridien’s allegations.

The court will determine the unjust enrichment counterclaim.

Type of Claim: Damages for breach of contract of a Master Services Agreement.

Electrician Jonathon Valaer claimed he was severely injured on April 25, 2018 when he received an electric shock. Valaer was working at a mobile home park to connect underground power lines from several mobile homes to secondary pedestals which are electrical boxes that provide electricity to the mobile homes. He alleged Q3 Contracting was negligent for failing to properly terminate wiring inside an electrical pedestal at the site where Valaer was working. Valaer said his hand came in contact with the side panel of a pedestal which delivered an electrical shock to his body and caused severe and permanent injuries.

Randall and Nora Roudybush alleged that during the second stage of labor, McLaughlin repeatedly applied and utilized a vacuum extractor to Aron Roudybush’s head and he suffered a grade IV intraventricular brain bleed that resulted in permanent injuries and damages.

McLaughlin admitted that she placed a vacuum cup on Aron Roudybush’s scalp three times but said she didn’t apply traction or pull with the vacuum device. She asserted the application of the vacuum didn’t cause the intraventricular hemorrhage diagnosed in Aron Roudybush’s brain. Van Dusseldorp contended she acted reasonably and appropriately throughout the labor and delivery and she denied that she caused or contributed to Aron Roudybush’s injuries. Penrose denied any negligence.

The jury returned a verdict for McLaughlin and Van Dusseldorp. But the court found in favor of the Roudybushes and against Penrose and awarded $8,030,003.

For MarkWest, the jury awarded $7,555,355.26 on each of the four claims, however, the claims were duplicative and judgment was entered for MarkWest for a total of $7,555,355.26. The court also found in favor of MarkWest and against Rehoboth on the counterclaims.

Type of Claim: Breach of contracts – damages only.

On Aug. 7, 2015, Heartland Biogas and A-1 Organics entered into two contracts, an operating lease and a substrate services agreement. The court determined A-1 performed its obligations under the contracts, that Heartland breached the lease and agreement and that A-1 suffered damages and was entitled to recover damages resulting from Heartland’s breach of the agreements.

The issue for the jury to determine was the amount of A-1’s damages. Heartland asserted A-1 hadn’t calculated damages correctly under Colorado law and failed to mitigate its damages.

On Aug. 8, 2019, Austin Bradley failed to stop at a stop sign at the intersection of Weld County Roads 84 and 15, and his Hyundai Sonata collided with Clifford Dilka’s Ford F350 that was pulling a house trailer.

The collision caused Dilka’s truck to roll over and Dilka was ejected. Dilka was found unresponsive at the scene and was airlifted to Poudre Valley Hospital for emergent care. Bradley sustained a head injury and reported no memory of the accident or the entire day leading up to the accident. Police discovered trace amounts of legally obtained marijuana products and paraphernalia in Bradley’s vehicle. Blood tests revealed Bradley had roughly 13 ng/ml of Delta 9 THC in his system more than one hour after the collision, over the presumptive limit which is 5 ng/ml under Colorado law. Bradley was acting within the course and scope of his employment at the time of the accident.

Bradley’s personal insurer and his employer’s insurer entered into an advance payment agreement and issued $1,240,000 pre-suit. Negotiations for the remaining $2,010,000 in available liability coverage failed and Dilka filed suit. Bradley admitted negligence for causing the collision, admitted Dilka was injured and that he incurred $809,552.09 in past medical expenses. Bradley said he was willing to concede Dilka may have some future medical expenses and may have been temporarily impaired while he was in a drug-induced coma in the ICU.

Bradley disputed the extent of Dilka’s claimed injuries and damages and expressly denied he acted with “willful and wanton” disregard to the safety of others, especially Dilka. Dilka requested punitive damages.

Type of Claim: Breach of contract, intentional interference with existing contract and with prospective business relationships, and misappropriation of trade secrets (claims by plaintiffs against all defendants); breach of fiduciary duty (plaintiffs’ claims against Giarratano Enterprises, Chad Giarratano and Flex Ortho). Request for punitive damages on the trade secrets claim. Exactech counterclaimed for breach of contract.

Since August 2017, Ortho Agency and Shatzer sold Exactech and other manufacturers’ products to hospitals, surgeons and surgery centers in Colorado, Wyoming, Montana and in portions of South Dakota and Nebraska. Shatzer brought claims against Exactech and Chad Giarratano and his business entities in October 2020 after Exactech terminated the parties’ sales agency agreement in late September 2020.

Shatzer alleged that both prior to and after ending the agreement and the parties’ relationship, Exactech and Giarratano undertook a months-long stealth campaign to eliminate Shatzer and Ortho Agency as the exclusive distributor for Exactech in these territories, install Giarratano and his business Flex Ortho LLC as the new distributor going forward and work together to take over Ortho Agency’s business and its relationships with customers and poach 12 out of its 14 sales representatives. Ortho Agency alleged that Exactech breached the sales agency agreement with Ortho Agency, including by not paying a previously agreed upon termination payment in the event of a termination without cause.

Ortho Agency alleged that Giarratano breached his contractor agreement with Ortho Agency by violating non-disclosure of confidential and trade secret information, non-competition and non-solicitation provisions, including when he went to work directly for Exactech as the new distributor and solicited and recruited Ortho Agency’s sales personnel to work for his distributorship and Exactech going forward.

But the court ruled in favor of Exactech on Ortho Agency’s claim of interference with prospective business relations. It found in favor of Ortho Agency and Shatzer on the claim of breach of fiduciary duty, awarding $1.00.