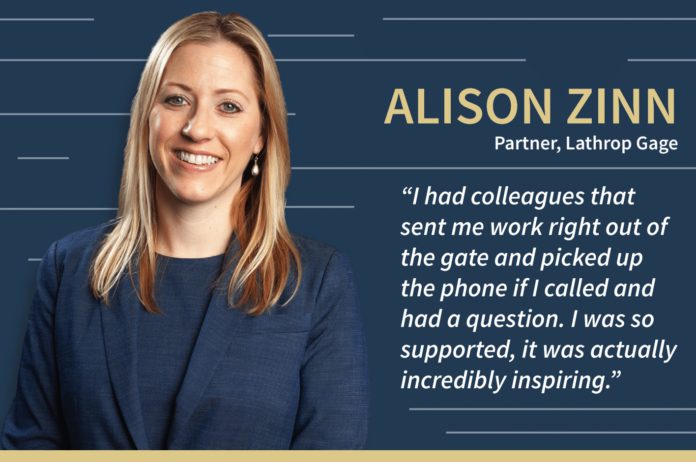 Alison Zinn got into her practice area for its ever-changing “Wild West” nature. Court appearances are frequent and cases are fast. That seems to fit perfectly for Zinn, who seems to have her own fast-paced, ever-changing nature.

Zinn is a past-president of the Colorado Women’s Bar Association and also serves on her firm’s Women’s Initiative Network group, the Colorado Supreme Court Attorney Regulation Committee and the 1st Judicial District Nominating Commission. On top of that, she’s developed a successful trusts and estates practice and sees it as a duty to provide pro bono services for clients who can’t afford an attorney but still have legal issues in that area to resolve.

In her first decade of practice, she has been aggressive in carving out her niche — as she describes her path, she mentions how important it is to be aggressive in pursuing goals. It can be easy staying in a job, but she didn’t want to accept the easy path. She sought a new practice area after feeling that her initial work in mortgage-backed litigation was something of a grind.

“I looked around the firm, and I didn’t know what else there was for me to do or that I wanted to do,” she said. “On top of it, I was working crazy hours, and it just wasn’t healthy. … And I looked at the senior associates in my firm, and they weren’t happy.”

She said she had become a lawyer to make a difference but didn’t feel like she was doing that. And after asking around about the work other attorneys were doing, she found something that fit her better. A former colleague had gone into trusts and estates and described cases working directly with people who had disputes with complicated stories and facts behind them.

Since taking the leap into trusts and estates litigation, she worked for a short time with that colleague’s firm before launching the trusts and estates group at Lindquist & Vennum and then eventually moving that team to Lathrop Gage.

During that time of starting the practice at Lindquist & Vennum, she relied on the other attorneys in Colorado’s small trusts and estates bar to offer support and help her by sending work or answering questions. “I had colleagues that sent me work right out of the gate and picked up the phone if I called and had a question,” Zinn said. “I was so supported, it was actually incredibly inspiring.”

The work has been exciting — as promised — with cases moving quickly and sometimes coming up with emergencies. Zinn has a case currently before the Colorado Supreme Court and had another significant case last year involving a seemingly strange fact pattern.

A judge delivered an order in July, about four months later, saying the brother had breached his fiduciary duties and that the deeds were void as a result. The court also awarded attorney’s fees, costs, interest, tax penalties and a surcharge penalty of $40,000, resulting in a total award exceeding $1 million. The case had a dramatic and emotional story behind it, but Zinn said those personal issues aren’t unusual in her work.

In the cases she’s worked on and in her path through the profession, Zinn demonstrates the importance of building relationships. She received help launching her practice, but she stressed how important it is for all young attorneys to find mentors and sponsors. She saw that importance herself when she ran for president of the CWBA. The position was something she wanted to do one day, but it wasn’t until a mentor suggested she go for it that she realized it was something within her range.

“It took someone else to see me that way and tell me about it that caused me to see myself that way in a realistic manner,” she said. “I don’t know when I would have seen myself realistically in that role if someone hadn’t told me that. It changed my career and me personally.”