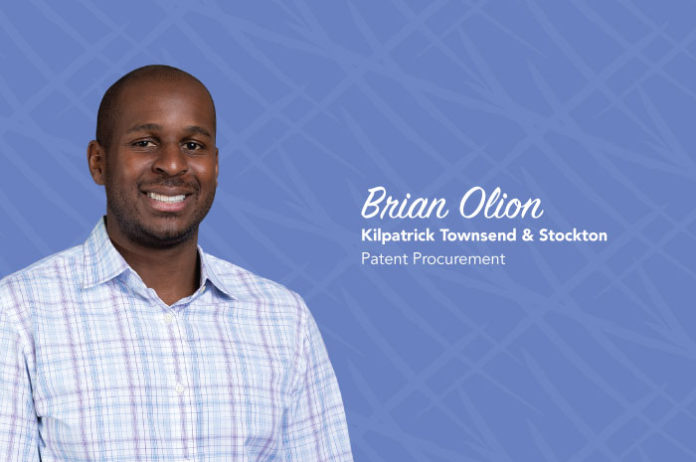 Brian Olion worked as a patent examiner before going into private practice as a patent attorney, and he compares the value of his background to a restaurant customer who has worked as a server themselves: They can have patience for the other side’s perspective, especially when things go wrong. Olion said he sees patent attorneys sometimes try to strong-arm examiners because many examiners don’t have a background in law.

“What I used to see when I was a patent examiner are people trying to litigate through you instead of working with you, so I typically take more of a cooperative approach,” he said. Olion added even when he thinks an examiner is wrong about whether something is patentable, he knows just throwing the law book at them probably isn’t the best approach. “Ultimately it’s beneficial for you, the patent office and the examiner to get an allowance because they get credit for allowances. The client’s happy on our end and, ultimately, the USPTO gets money.”

At Kilpatrick Townsend & Stockton, Olion specializes in patent procurement in financial technology, or “fintech,” such as payment processing systems and software security programming. Olion majored in electrical engineering for his undergraduate degree at North Carolina State University. The USPTO requires patent examiners to have some kind of math, science or engineering background.

“They’re looking for people who can understand technology more than the law,” he said. He did get his engineering degree with an eye for pursuing that field.

But when Olion did a few internships, he realized he didn’t really have the personality for working in a lab or coding nonstop. And he also took a class that fused engineering and business to learn about aspects such as selling and protecting products, and he said he realized he didn’t mind the patent law section of the class.He applied to the USPTO after hearing from a professor that the office needed examiners who understood technology. The office also happened to have a need for native English speakers. Olion said a lot of examiners at the time spoke English as a second or even third language. “I don’t even understand half the legalese stuff and English is my only language,” Olion joked.

He stayed at the USPTO as a patent examiner for about five and a half years. During that time, he went to law school part-time at George Washington University, having decided it made the most sense to get his degree while he kept his job in case a legal career didn’t work out for some reason.

“It was an adult decision to kind of hedge it,” Olion said. “I wasn’t necessarily sold on being a patent attorney or not … I took the LSAT, applied and [thought], ‘Let me see the first semester if I like it or not.’” He was able to take a truncated version of the patent bar exam that’s internal to the USPTO and focuses just on patent laws.

Olion’s specialty in fintech is a niche practice area, he said, a combination of constantly changing laws and inherent difficulty of patenting financial technology.

“The hard part about that is the way that U.S. patent laws have gone, things that are called ‘fundamental economic practices’ are not technically patentable.” Olion said the USPTO considers financial transactions and commerce to fall in that category. So patents have to cover components adjacent to the technology’s core function, such as data authentication that happens to be for a payment processing system.

“It’s a very interesting area [for] how you navigate that field of getting things that are useful to your client, but that also satisfy the USPTO’s regulations.” He said the difficulty of patenting in the financial technology space means companies often don’t try, and instead will treat their technology as trade secrets.

Adding to the complexity is the fact that the USPTO has released guidance twice in 2019 attempting to clarify patentability.

Guidance released less than two weeks ago relates to existing judicial exceptions to patentability, or subject matter that courts have decided is outside the categories of invention. Judicial exceptions include abstract ideas, laws of nature and natural phenomena.

“It’s already a difficult area, and then with the law that continuously changes, there’s a lot of uncertainty,” Olion said. “What was once your argument two weeks ago, now all of a sudden shifts. That could be to your benefit, could be to your detriment.”

But Olion added when financial technology patents are obtained, they have a lot of value because they cover a wide spectrum of useful technology.

“They’re really useful, because they do cover a lot of useful activities, especially payments or authentication. … It’s hard to get patents — it’s the lowest allowable rate in the USPTO — but I like to think those patents are valuable if they’re actually obtained.”