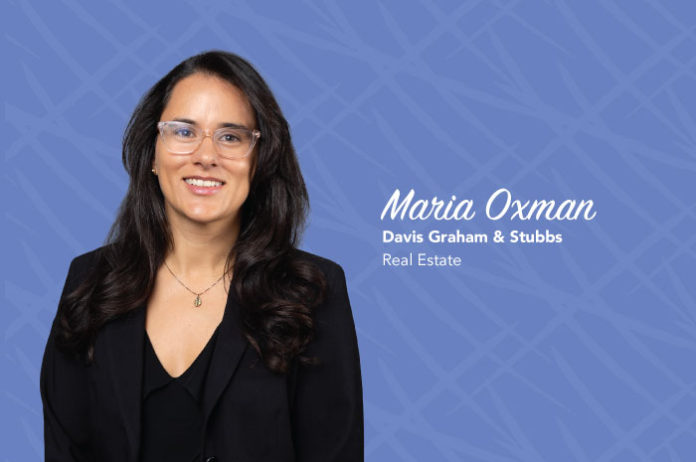 Maria Oxman’s path to her current role as an associate in Davis Graham & Stubbs’ real estate practice was an eight-year trek. Eight years of law school, to be specific: Six at Universidad Francisco Marroquin in Guatemala, her home country, and then two years to get her J.D. at the University of Denver. She said Guatemala doesn’t have the equivalent of undergraduate studies, and university students instead go straight into specialized studies for their chosen career path.

So she still had to get a J.D. to be licensed to practice in the U.S., and she said the Sturm College of Law gave her a year of credit for her studies in Guatemala. She met her now-husband during a summer abroad in the U.S. while still finishing law school at home, so she moved to the U.S. after finishing her degree in Guatemala.

“I couldn’t get enough,” she joked. “So I ended up doing eight years of law school before starting [my practice].”

Oxman specializes in commercial leasing at Davis Graham & Stubbs, and even that subset encompasses a lot of different types of transactions, since leases can be for industrial, retail or office property.

But she also does work in the hospitality space and in purchase and sale agreements. When she advises clients on ground-up development projects, she said she enjoys watching the projects come to fruition and knowing she had a role in them.

Oxman is also a go-to attorney for the firm’s mergers and acquisitions practice when those attorneys have transactions with a real estate component. She helps review companies’ real estate assets and summarizes them for the corporate attorneys to figure out next steps. She said transactional work requires balancing advising the client sufficiently with getting out of the way in a sense so the deal at hand gets done. “In transactional work, people want to get things done, and you certainly don’t want to be an obstacle that is big enough to jeopardize a a transaction.”

But part of her advisory role does require her to make clients think about contingency plans in case things go wrong, such as if the relationship between two parties in a deal goes sour.

Oxman added transactional work also involves connecting clients with other professionals who have a role in the overarching project, such as brokers and construction contractors, to help create a cohesive team for the project to go smoothly.

Oxman said she’s proud of her ability to balance her work with being a mom. Her own mother’s career inspired her to be a lawyer, and she said she loves her career. Oxman had her first baby the day after she graduated law school, and she said she believes always having had to balance work and parenting gave her a head start in knowing how to juggle the two.

“My first boss was amazing, and that set a parameter of what I wanted in a law firm as a mother of young kids,” she said. “So when I moved to Davis Graham & Stubbs, I was looking for … somewhere where I could stay for the rest of my career and also be a good mom.”

Oxman may have proven herself a fast expert in real estate law, but her eyes really light up when she talks about her accomplishments outside her practice. She’s on the board of MAIA, a nonprofit that has opened a girls’ school in Guatemala.

She explained the country does not have a good public education system, so private school is people’s only chance at the preparation they need to attend a university. Oxman’s parents were not wealthy when she was growing up, but they put all the money they had toward her private education. She said her private legal education was how she made connections to ultimately come to the U.S.

“I literally wouldn’t be here had I not gone to that school. It’s a world of a difference.” Oxman said 1% of Guatemala’s population goes to university, and those who don’t tend to go into lines of work such as manual labor and service work. Much of the country’s indigenous population lives in poverty in rural areas and doesn’t have access to quality education.

The school MAIA operates started as a mentorship program for girls that also focuses on topics beyond academia, such as health, and went from working out of rented rooms to building its own facility from a donation. She said the school has a lot of visibility because of its location in Sololá, a transportation hub for Guatmala’s countryside.

“People can see the school and they talk about it. This is a very machista society, and when people are talking about how incredible this school for girls only is, you’re changing the way people think.”