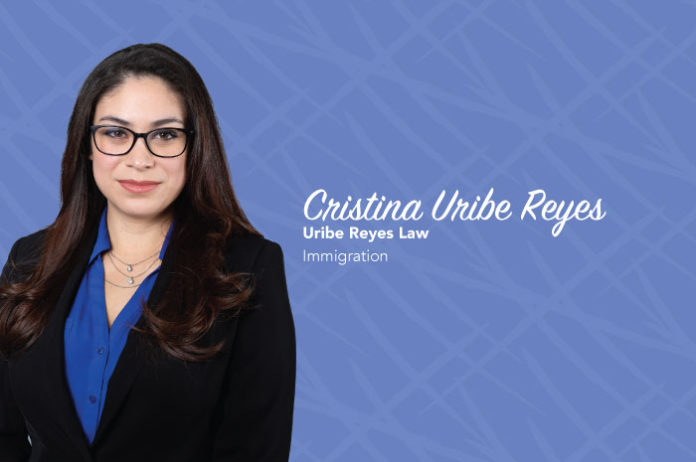 Cristina Uribe Reyes has found that it’s sometimes the upset clients and the cases that aren’t going well that offer the biggest lessons.

Not long ago, one of the Denver-area immigration attorney’s clients called her up, frustrated and angry, over a misunderstanding. Uribe Reyes had already submitted paperwork for the client by mail, but someone on the other end of an immigration hotline had told the client the documents should have been e-mailed instead. The person on the phone was wrong, but the client was worried the attorney had made a mistake.

Uribe Reyes said her gut reaction was to get defensive. But then she took a step back.

“I just thought back on my experience and how long it took for us,” said Uribe Reyes, who has been practicing since 2017. She was able to calm the client down and explain that everything was fine with the application.

She didn’t have to think back too far to put herself in her client’s shoes. In 2018, the Mexico-born solo attorney became a citizen of the United States — a country she has lived in since age 2 and where she spent two decades as an undocumented immigrant.

Her ability to empathize about the uncertainty and long waits of the immigration process help distinguish her in her practice, which focuses on family-based immigration cases and removal defense — representing clients with deportation proceedings against them.

One of her biggest accomplishments so far has been winning asylum for a family from El Salvador — a mother, father and two kids, including a daughter who had been raped by gang members. Uribe Reyes was able to guide them through the asylum process without re-traumatizing the girl by forcing her to talk about the assault in court.

Other highlights of her legal career include helping her parents with their green card applications while working as a paralegal and, later, helping her sister through the process as an attorney.

Uribe Reyes’ parents had a family-based petition to gain legal status in the U.S. dating back to 1994, but the petition was pending until 2016. During the wait, she and her sister aged out of the family petition and were left to gain permanent resident status for themselves. Her experience as an undocumented immigrant pushed her onto the path she’s on today.

“In high school, when I was trying to figure out how I was going to go to college being an undocumented student, that’s when I really started to get involved with organizations that were working around immigrant rights and some changes in the law,” she said.

In her last year of high school, she worked on a bill to allow certain undocumented students in Colorado to qualify for reduced tuition so they could go to college without paying international student rates. Ineligible for federal loans and public scholarships, Uribe Reyes managed to attend a private college in Kansas with the help of private scholarships and a loan from an individual. But she still faced hardships due to her status. She didn’t have a work permit or a driver’s license, which made life hard for a struggling student in small-town Kansas. In her final year of college, she finally got her green card, making it possible to pay for law school.

She started her legal career at Muhaisen & Muhaisen, first as a paralegal and then as an associate attorney, handling the same types of immigration cases she does today.

In May of this year, she hung a shingle as a solo attorney with Uribe Reyes Law. She said the decision to strike out on her own was motivated by a desire to move away from an hourly billing practice, something she said makes it hard for the most vulnerable clients to budget for a lawyer. Flying solo has allowed her to “find that happy medium” between covering her costs and affordability, she said.

“What that looks like in my practice is exclusively flat-fee billing so that they are better able to budget for whatever it is that the representation is going to cost them,” Uribe Reyes said. She also offers payment plans to offer more flexibility to clients.

“I think that really works in immigration, because often the cases take so much time to move through the system,” she said. “You can structure the payment plans to spread them out to really make representation affordable.”

In May, Uribe Reyes joined up with Legal Entrepreneurs for Justice, an incubator for attorneys who want to start a socially conscious business. Through the program, she made a commitment to flat-fee billing.

She said she’s still figuring out some of the details of contracts to ensure she doesn’t make more work for herself — a challenge for a new solo attorney with no staff.

As a solo attorney who has to wear a lot of hats — from being her own secretary to handling marketing for her practice — she relies heavily on technology. She said programs like Docketwise function “almost like my paralegal” by managing data and transferring it to all the forms required in immigration cases.

Referrals from other attorneys are her biggest source of clients right now. She said she’d eventually like to hire some staff, but she’s still thinking about how to build her young business.

In order to help with that goal, she’s been doing 20 hours of pro bono work per week since May for Project Safeguard in conjunction with Legal Entrepreneurs for Justice. There she assists victims of domestic violence seeking protection orders, advises them on immigration issues and has represented clients in divorce and child custody cases.

The pro bono work has helped her brush up on rules of evidence, gain experience in state court and develop her knowledge of family law, an area she’s considering adding to her firm in the future.