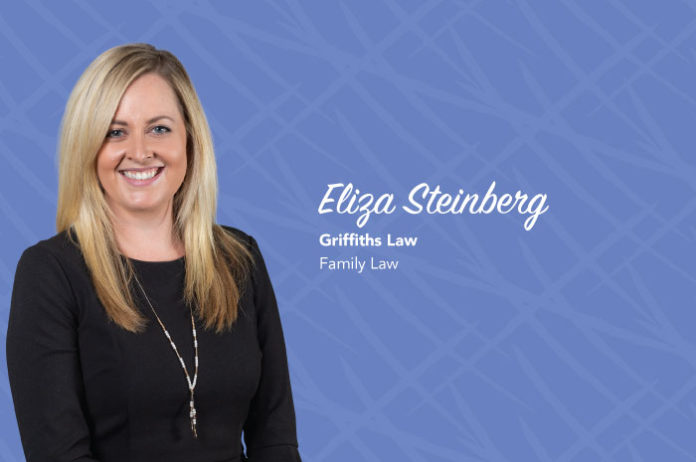 Eliza Steinberg had a leg up in law school. As a paralegal at then-Gutterman Griffiths — now known as Griffiths Law — she already had exposure to many legal concepts and had hands-on experience doing a lot of things lawyers do professionally.

Working under shareholder Suzanne Griffiths, she was already drafting motions and briefs that associate attorneys do. The big difference in eventually transitioning from paralegal to lawyer at the firm was in signing her own name onto those documents.

Steinberg now practices in family law at Griffiths Law. Although she’s already spent her entire legal career at the firm, she said she has no intention of leaving. Her long-term plans involve becoming a shareholder at the firm. Besides, the practice area suits her.

That part took some time to figure out, though. Steinberg took the slightly longer path to becoming a lawyer because she was advised during her undergraduate education not to become a lawyer just to become a lawyer. She had already chosen to study political science simply because her parents had both been poli-sci majors. She wanted to make sure that the legal profession was the right fit before jumping in.

Once she began working at the firm, though, she felt that the law was right for her and family law dipped into her other academic interest of psychology.

“Family law really is an intersection of psychology and the law because you are dealing with people who are going through some trauma, the hardest time in their lives and a lot of emotional difficulties,” Steinberg said.

For instance, she recently worked with a client who had gone through a rough divorce and had been involved in litigation for the five years since the split, and her ex was trying to terminate her spousal maintenance. The client had cycled through three different attorneys in that time. The former counsel had told Steinberg that new blood was needed to help the client who was burnt out by the fighting. Steinberg said she was happy to take on the challenge. It turned out to be one of the quickest trials she’s been involved in yet.

“In family law, there’s really not much winning or losing in the courtroom. We call it degrees of losing because when you litigate a divorce, no one’s going to walk out with everything. They’re going to walk out with less than they came in with,” Steinberg said. She filed a motion to dismiss the case and was denied so the ex-spouse would have an opportunity to make their case. Steinberg felt they failed to meet a legal standard to terminate maintenance, though, and she filed her motion to dismiss a second time and had it granted. “I’ve never had to do so little work for such a big win,” she said. And she felt that it gave her client a newfound faith in the justice system. “She’s been flattened over and over and over again. …  People get burned out on cases that just go on and on and on.”

Steinberg said she believes being willing to try for the motion again and not being afraid to go to trial are important qualities for a family law attorney, but her focus is always on reaching a positive settlement for her clients. In emotionally charged cases, it’s always better to let the two sides reach an agreement on their own so they have more buy-in in the decision, she said.

“When two people sign on the dotted line and say this is what I agree to, they are way more likely to follow it,” she said. “And when a judge comes in and says, ‘This is what you’re going to do, and you have no say,’ people sometimes then do what they want anyways, and then you end up in more litigation.”

In addition to her practice, Steinberg seeks to help others as a mentor, as well. She said Griffiths was an influential mentor for her and helped her get through law school and join the firm as an attorney. Steinberg now mentors other paralegals at the firm and shares her experience as a paralegal as well as a law student.

Her biggest advice that she gives to law students is to develop a healthy work-life balance and to always have something to look forward to — whether at the end of a semester, the end of the program or after taking the bar exam — to have a celebration, a nice dinner or other reward to keep on the calendar.

“Two of my paralegals are currently in the same program I did at the University of Denver, so I got to help train them and help them not have mental breakdowns when they’re getting completely overwhelmed,” Steinberg said. “I’m living proof of survival.”