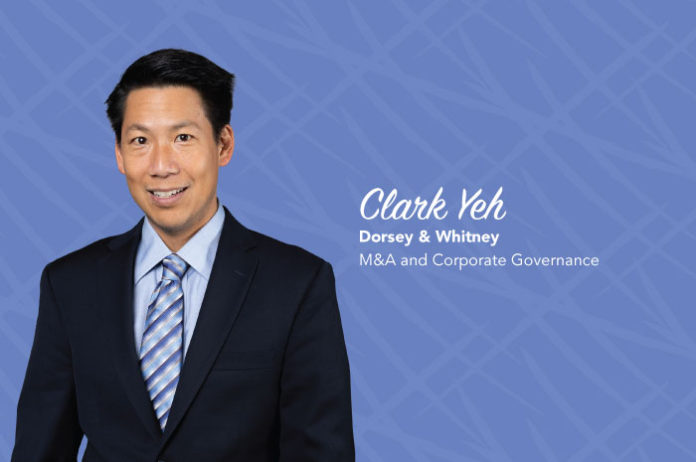 Since Clark Yeh took up distance running 10 years ago, he’s now completed about 20 marathons. These have included the Pikes Peak Marathon, which scales the fourteener and descends back down. It’s a race known for its grueling ascent into high altitude that inspires moments of regret.

“I did [my] first one. And I’m thinking, What am I doing?” Yeh said. “And then I find myself signing up for another one.”

According to his firm, Dorsey & Whitney, the transactions Yeh has worked on since summer 2018 have a total value exceeding $2.1 billion. He’s worked on 30 different client matters in the past year, with clients in a variety of industries from medical devices to credit cards to health insurance.

Yeh took on a key role in a $4 million public offering of a gold mining firm. It was a Regulation A+ offering — like an IPO, except with a process designed for smaller companies that is less costly and burdensome. But Regulation A+ is also still in its infancy, being borne out of the Jumpstart Our Business Startups, or JOBS Act of 2012, and the process isn’t well-worn ground for corporate attorneys, or even within the Securities and Exchange Commission.

“It’s exciting because it’s still a very, very new concept,” Yeh said. “It’s new enough that when I would call the SEC looking for guidance … there are times when they didn’t know the right answers as well.”

Yeh was a primary drafter on key documents and was a go-between for his client and the SEC. Even though the point of a Regulation A+ offering is its streamlined process, it paid for Yeh and his team to be thorough. Sometimes the SEC sees parties filing documents with the assumption that they can just go back and fix things later, Yeh said. Being communicative with the commission, his team and his client wanted get everything right the first time, he added.

The project ran from July 2018 to May 2019, according to Dorsey & Whitney. The day before filing, Yeh managed the process during the overnight hours getting documents ready. The project had a lot of stakeholders, and their counsel, involved, and the fact the company was based in Canada but primarily operated in the U.S. added a layer of “cross-border considerations” to the offering, Yeh said.

Yeh said it may be a cliché in transactional practice to describe projects as “win-wins,” but that’s one of the things he loves about it. “I truly think that all parties at the end of the day are going to have some sort of a positive outcome.”

Yeh spent 10 years in ecommerce before entering law school, having cofounded an online loyalty shopping program. “And because of that, I’ve always had a passion for working with business and … working with entrepreneurs as well,” he said. He enjoys working with companies’ corporate governance issues “behind the curtains,” making sure they’re conducting their meetings and making decisions in accordance with the law.

Yeh, who is on the board of the Asian Pacific American Bar Association’s Colorado chapter, was picked by the Leadership Council for Legal Diversity for its Pathfinder Program this year. The LCLD recognizes high-performing attorneys from diverse backgrounds and gives them networking opportunities and professional development tools. Yeh was one of 223 attorneys nationwide in this year’s Pathfinder class.

When it comes to professional development, Yeh likes to pay it forward through mentorship. One piece of advice he offers law students, when they’re discouraged, is that it’s significant they made it to law school to begin with. “I remind them that you’ve made this far — you have the skills, you have the talent, you have the motivation. You just continue that path.”

Once he got into a law firm, Yeh found that the key to getting on more and more projects was being unafraid to branch out.

“When you’re asked, raise your hand,” Yeh said. “And it might not exactly be in your wheelhouse. But I think to be willing to take on tasks that that might not be within your core practice … somewhere you’re going to you’re going to pick up some skills that are valuable to you.”

When working long hours to get a deal done, Yeh said it helps him to think about the big picture. It’s something he had to do back when he was in high school and had Olympic aspirations in table tennis. Like a big closing requires today, training at the U.S. Olympic Training Center in Colorado Springs required “a lot of early mornings, late nights, weekends,” Yeh said. “But you’re there because you’re committed to a goal.”

When his Olympic ambitions didn’t materialize, Yeh eventually replaced that sport with marathon running, which also benefits from his long-haul mindset.

“When you’re at that 20th mile, or when you’re training at the Olympic Training Center on the weekends … sometimes it’s tough. But you realize what the goal is,” Yeh said. “These different experiences helped me to kind of just buckle down and realize … we’re going to reach that finish line sooner or later.”