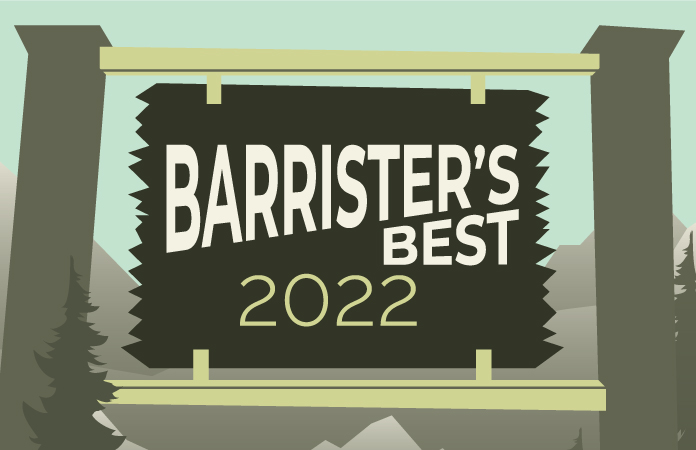 David Tenner’s practice as a trial lawyer, arbitrator and mediator continues to gain attention. He makes consistent appearances in our Barrister’s Best issues for his arbitration prowess and has been featured eight times. Tenner is also a regular in Super Lawyers since his first appearance in 2009 and has been recognized by Best Lawyers since 2017.

With more than 40 years of experience, James Lyons is a well-known Colorado arbitrator and a regular in Super Lawyers since 2006. He was also our Lawyer of the Decade in 2011 and has been recognized by Chambers USA in the top band for commercial litigation since 2013.

With a 90% settlement rate for more than 1,500 cases, Richard Rotole is a highly skilled mediator who has been recognized by Best Lawyers and Super Lawyers. Rotole is also familiar with Barrister’s Best, having appeared in our 2019 issue as the people’s choice in family law arbitration.

With his past experience as a trial lawyer making him a popular mediator, Skip Netzorg has negotiated multibillion-dollar disputes. He’s made repeat appearances in Chambers USA, Super Lawyers and Best Lawyers in addition to being named in our Barrister’s Best issue last year in this category.

With significant experience in complex fields like construction defect, insurance, real estate and commercial litigation, Duncan Griffiths isn’t just a formidable litigator in the courtroom. He’s also practiced at finding settlements and solving complex legal problems without litigating. To date, he’s recovered more than $50 million in damages for his clients.

Billy Jones is the former vice-chair of Moye White’s trial section and focuses on complex civil litigation and business disputes. He has extensive trial experience in front of both out-of-state courts like the South Dakota Supreme Court and in state appeals courts like the Colorado Court of Appeals and the federal 10th Circuit.

Duncan Barber has extensive experience litigating for businesses, and he’s no stranger to peer acclaim. He appeared in Best Lawyers’ Commercial Litigation category from 2019 to 2023 and was previously an adjunct professor at the University of Denver.

K.C. Groves is a commercial trial lawyer with experience in both jury and bench trials and appeals in state and federal courts. Known as a fierce advocate for his clients, he’s also previously served in leadership positions at Ireland Stapleton and was the board chair of the Colorado Judicial Institute from 2013 to 2015. Groves is currently on the board of directors for Project Sanctuary.

Featured in the Best Lawyers in America Ones to Watch list from 2021 to 2023, Christopher Griffiths’ practice in complex civil litigation and family law matters continues to receive industry recognition. He’s been on the Colorado Super Lawyers list as a rising star since 2017. Griffiths is also a familiar face in Barrister’s Best, winning the title for best civil litigation attorney in 2019.

Gwyneth Whalen is the leader of Caplan & Earnest’s litigation practice group and in her practice, she conducts workplace investigations for both private and public employers. Bringing her experience as a former judge and litigator to the fore, her unique perspective and expertise bring a neutral fact-finding approach to high-profile matters.

As a trial lawyer working with whistleblowers to expose illegal conduct, Clay Wire works tirelessly to ensure his clients get the rewards they deserve and are protected from retaliation. Has been recognized by his peers through awards like the 2018 Plaintiffs Employment Lawyers Association Case of the Year and has also previously appeared in this category in Barrister’s Best in 2018.

Stephen Baumann partners with employers to resolve employment and labor issues, from hiring to performance management, investigations and separation of employment. He also volunteers with the Center for Legal Inclusiveness and participates in educational programs to promote inclusiveness in the legal profession. Baumann’s been a Rising Star in Super Lawyers since 2016 and was named in Ones to Watch by Best Lawyers for the past three years in a row.

Mike Wagner’s practice includes all areas of intellectual property, with a particular emphasis on patent prosecution. He’s a member of the American Intellectual Property Law Association and previously served on the board of directors for the Colorado IP American Inn of Court. Familiar with the world of innovation and invention, Wagner designed remotely controlled high-voltage circuitry to build a lunar dust accelerator before he went to law school.

Sabrina Stavish has filed around around 3,200 trademark applications with the U.S. Patent and Trademark Office. Perhaps just as impressively, Stavish appeared in Chambers USA from 2015 to 2021 and Best Lawyers from 2014 to 2023 and was named the Copyright Law Lawyer of the Year for 2023. She’s also no stranger to Barrister’s Best and was listed in our 2014 and 2015 issues.

Seasoned trial lawyer Kenzo Kawanabe represents businesses and individuals in high-stakes matters with a particular emphasis on intellectual property. He teaches at the National Institute for Trial Advocacy and has been recognized by Chambers USA and Best Lawyers for his commercial litigation skills.

Aaron Bradford has been in our Barrister’s Best since 2017. He serves as outside general counsel to companies bringing their products and services to market. He founded the Wheels of Justice, which has raised more than $5 million for pediatric oncologic research and care and also recently founded youth basketball training program THE BUREAU.

Meghan Pound was previously featured in our Barrister’s Best in 2019. She now leads Caplan & Earnest’s health law section where she works in the defense of hospitals and medical professionals accused of civil rights violations, negligence relating to professional review and false claims act violations.

Jennifer Evans focuses her practice on fraud and abuse, Medicare and Medicaid reimbursement and regulatory compliance. She’s been listed in Best Lawyers for health care law for the past three years and appeared in Barrister’s Best for health care law in 2016, 2018 and 2019 in addition to being selected as a Lawyer of the Year recipient in 2018 by Law Week Colorado.

David Woodruff is a medical malpractice attorney of note. He’s been regularly recognized for his work by Best Lawyers and Super Lawyers alike and isn’t new to Barrister’s Best either, having appeared in our 2014 issue in this same category. To date, he’s recovered more than $140 million for his clients and he’s obtained one of the largest medical malpractice settlements in the country at $70 million in a birth injury case out of California.

Troy Rackham is by now familiar with peer praise — he’s been named by Best Lawyers in medical malpractice for defendants from 2012 to 2017 and again from 2019 to 2023 and he’s been listed in Super Lawyers since 2009. In addition to his impressive work defending hospitals, nursing homes and health care organizations, he counsels providers on regulatory, employment and ethics matters.

A mainstay of our Barrister’s Best issues dating back to his first appearance in 2011, Kevin Kuhn has represented clients in more than 135 trials. He’s been listed as a Super Lawyer since 2006 and is also a regular in Best Lawyers among many other professional accomplishments.

Duncan Griffiths’ widely varied legal practice seems to mesh well with his ability to solve issues creatively. In his second appearance in Barrister’s Best 2022, his work with construction defects shares in the spotlight of his litigation prowess.

Drawing on more than two decades of experience in construction defect litigation, Heidi Storz has assisted thousands of building owners to resolve their construction defect disputes. She’s been recognized by Best Lawyers since 2018 and has appeared in Super Lawyers since 2012. Storz is also no stranger to recognition in Law Week — she was one of our Top Women Lawyers in 2012 and 2016.

Specializing in insurance litigation defense, Brad Shefrin has handled hundreds of construction defect lawsuits. He appeared in our Barrister’s Best issues in 2017 and 2020 for insurance defense and has been listed in Super Lawyers since 2013. Shefrin was recognized by Best Lawyers this year and his practice includes matters related to professional malpractice, labor and employment and general liability.

Stephen Shapiro, gaining his fifth win in our people’s choice category, focuses on the pursuit and recovery of insurance benefits for policyholders. Shapiro celebrates many professional successes, and he’s appeared in Best Lawyers since 2013 for his insurance practice. He’s also been listed in Super Lawyers since 2010.

Bradley Levin’s practice focuses on tort and commercial litigation. He’s achieved several seven-figure settlements for bad faith and insurance lawsuits. Levin was awarded a lifetime achievement award by the Colorado Trial Lawyers Association in 2015 and was recognized by Best Lawyers for 14 years in a row.

Rob Baldwin, an insurance lawyer of 39 years, advises and provides assistance on insurance claims, bad faith and insurance agents errors and omissions. Baldwin, at trial, has obtained a more than $2 million award and has received the highest possible rating from Martindale-Hubbell since 1994.

Brian Spano focuses on commercial and insurance-related disputes for corporate clients. He’s worked with the Colorado ‎Commissioner of Insurance as counsel and receiver in connection with insurance companies.