Colorado Supreme Court Justice William Hood spent 10 years as a prosecutor in the 18th Judicial District. And he recalled instances when a defendant would be the only person of color in the room.

“And that’s really troubling when that happens,” he said. “I just try to imagine the defendant in that situation and looking out and seeing people that don’t resemble me at all.”

Hood has paired up with Justice Monica Márquez to address that lack of diversity through what they’ve called a “bench dream team,” intent on encouraging diverse attorneys from around Colorado to apply for judgeships. They’re building a network of judges willing to sit down with hopeful applicants over coffee or lunch to talk about their interests.

Those types of conversations have special significance for Márquez. She joined the court in 2010 and made history as the first openly gay Latina to do so. But she almost didn’t apply at all, the possibility not even crossing her mind until members of the Colorado Hispanic Bar Association took her out for coffee to try convincing her to throw her hat in the ring.

“It was just such a coffee conversation that convinced me to apply way back when,” Márquez said. “So I think those kinds of one-on-one conversations can be really effective in giving people that extra nudge.”

Hood added he has heard the sentiment that diverse attorneys may not think of themselves as judge material. The dream team aims to address that doubt.

“They’ve grown up like so many of us thinking, ‘It’s somebody other than me,’” he said, alluding to the stereotype of judges as white men.

Before starting the bench dream team, Márquez joined in making a recently released training video for the state’s judicial nominating commissions designed to make their members more aware of diversity issues, such as implicit bias, in the nomination process. The last such training video was made in 1997, Márquez said.

Hood and Márquez kicked off the bench dream team early in 2017, but they said it’s still getting off the ground as they grow the number of judges involved and spread word. Judicial members who are a part of the team range from Denver County Court judges to Supreme Court justices, including Justice Richard Gabriel and former justice Alex Martinez in addition to Márquez and Hood.

“Just to plant the seed of the idea I think is so important, because I think [for] a lot of people, it just never even crosses their mind,” Márquez said. “And that’s really the whole purpose of the dream team.”

The initiative builds on other “dream team” projects in Colorado that have existed for several years as an effort by the Center for Legal Inclusiveness, each headed by a judge and made up of a range of legal professionals, designed to address diversity in the legal profession generally by talking to middle school, high school and college students to build interest in the career path. Karen Hester, CLI’s executive director, said Hood approached her with the idea of forming the bench dream team after attending a recruiting event to encourage judges and other legal professionals to get involved with the teams.

“There’s a big pipeline in between those two, and there’s leaks all along it,” Márquez said of the need for the judiciary to look like the general population it serves. “We’re a long way from making our bench look like our population, but we’re drawing from an attorney pool that already doesn’t look like that population.” She added the demographics of judicial applicants aren’t tracked, and although the Office of Attorney Regulation Counsel makes efforts to gather data on Colorado’s attorney population, it’s likely inaccurate because supplying such information is voluntary, she said. 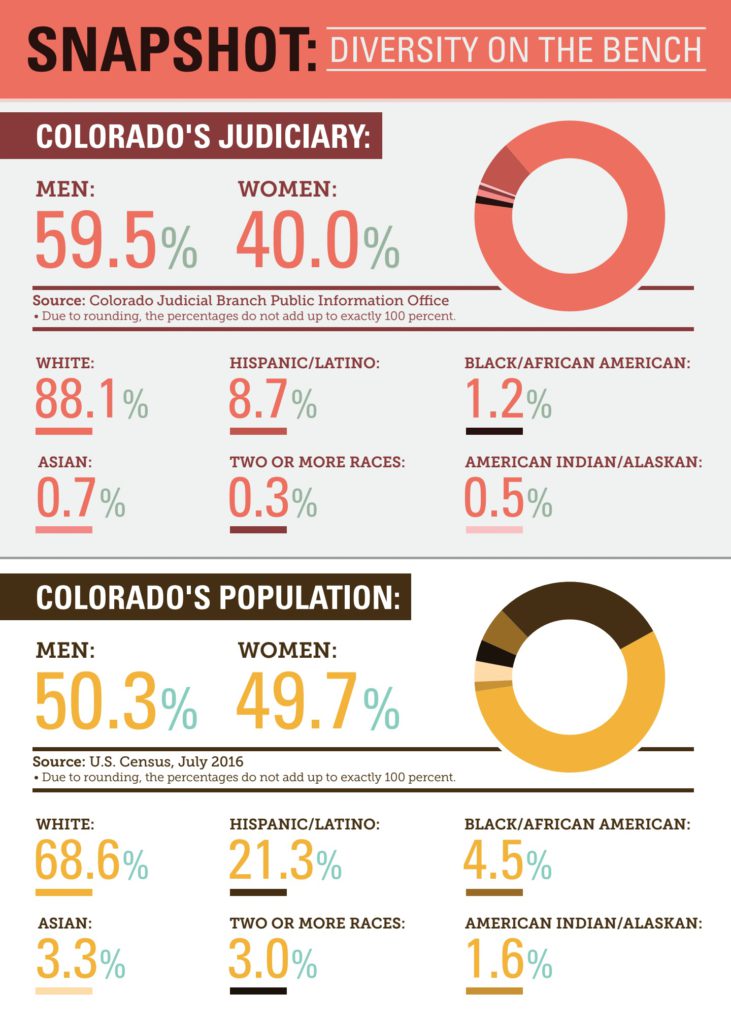 The bench dream team comprises subcommittees to mentor what they deem “contenders” and “candidates” as well as law students. Contenders are those who might want to apply for judicial positions in the future but aren’t ready yet, and candidates are those more poised to apply for openings.

“Once you’re on the bench, I do think you recognize the importance of having diversity on the bench and even the impact it can have those behind you,” Hester said. She added the scope of diversity also includes a range of life experiences and backgrounds, and isn’t limited to only racial and gender diversity.

The dream team is expanding awareness by reaching out to Colorado’s specialty bar associations and law schools. They’re also putting a series of articles in the Colorado Lawyer, called “You Be the Judge,” to profile diverse judges around the state. And they’re relying on word-of-mouth, because Hood, Márquez and Hester recognized not everyone belongs to the specialty bars.

Hester, Márquez and Hood echo the same overarching theory for the need to increase diversity in the judiciary: The better its makeup reflects the population the bench serves, the more likely people are to perceive the judiciary as fair.

Hood said although he believes the state has made progress increasing the numbers of women and Latino judges, he also noted Colorado’s Supreme Court has had only one black justice, Gregory Kellam Scott, and never an Asian justice. He said he understands it may be years before initiatives such as the dream teams yield significant results, but added it’s about small steps.

Márquez recalled a recent speech she gave to a diverse group of students from Rangeview High School about her experiences as a judge, and had them sit on the court bench. She said she loved seeing their faces light up as they peered down from their high perch. “If we can walk away from an afternoon like that having inspired some kid to go to law school, then it’s absolutely worth it.”