Health Care at the Capitol

Our health care feature focuses on changes at the Capitol that touch on the health care space. Also, one district attorney is asking the legislature to come with a statewide plan for sealing old marijuana convictions; Colorado’s Blue Ribbon Bail Reform Commission released its first draft of recommendations; and the General Assembly took a handoff from the Colorado Court of Appeals in revising the state’s sexual assault laws. 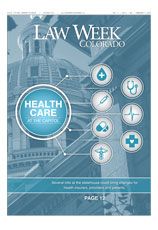