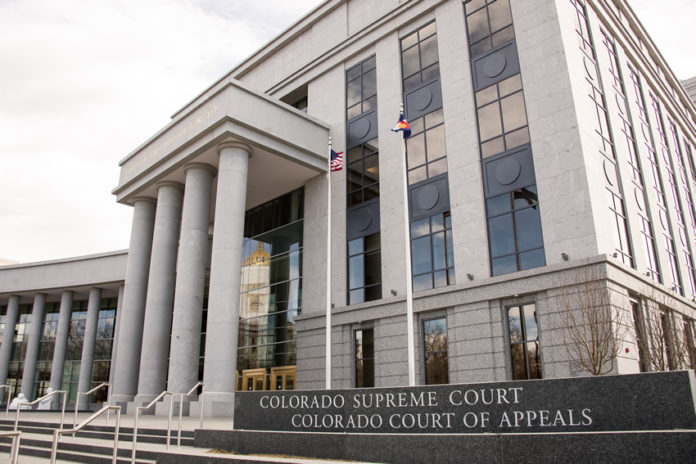 The case stemmed from surveillance on the home of Rafael Tafoya by Colorado Springs Police after receiving a tip that his home was a “stash house” for drugs. For three months in 2015, law enforcement taped Tafoya’s fenced-in home and stored the footage indefinitely. The police presented a video of Tafoya carrying plastic bags described by the informant into his home in order to obtain a search warrant. The search led to the discovery of narcotics and Tafoya was subsequently charged.

A trial court rejected Tafoya’s claims that the pole-mounted surveillance was an unreasonable search. But on appeal, a division of the Colorado Court of Appeals sided with Tafoya. The Colorado Supreme Court upheld the decision, reversed Tafoya’s convictions and remanded the case for further proceedings.

In a sister case to People v. Tafoya, the Colorado Supreme Court reversed convictions for Gabriel Sanchez after it ruled that prolonged, pole-mounted camera surveillance by Colorado Springs law enforcement was an unconstitutional search.

One June 25 and Aug. 24, 2015, Tafoya opened a gate that shut off a portion of his driveway to allow Sanchez, his co-defendant, to enter. The two men then carried white plastic bags described by a police information into the home’s garage.

For the same reasons outlined in People v. Tafoya, the Colorado Supreme Court ruled that the video surveillance violated Fourth Amendment rights. The case was remanded to the court of appeals with instructions to return it to a trial court for further proceedings.

Marquis McDonald attempted to rob a jewelry store in the Park Meadows Mall in 2015 with three accomplices. The group made off with a dozen Rolex watches but was quickly caught near the mall as was the get-away driver in a minivan that the group stole.

McDonald was charged with conspiracy to commit theft, theft, criminal mischief, first-degree aggravated motor vehicle theft and engaging in a pattern of racketeering activity in connection with an enterprise consisting of a group of individuals associated in fact. While McDonald’s counsel agreed with most of the charges, it took issue with the vehicle theft and pattern of racketeering charges. His attorney told the jury the COCCA charge was “a result of mafia-ism and cartels” but McDonald’s conspirators were “not even an organization” and “guys [who got together and did something stupid.”

The trial court rejected McDonald’s proposition to define “enterprise” using Racketeer Influenced and Corrupt Organizations Act and instead defined it to jurors as a “group of individuals, associated in fact.” The trial court and jury both expressed confusion over the phrase “associated in fact.” A  jury convicted McDonald on all counts and he was sentenced to 96-years in custody.

Appealing his conviction, McDonald argued that COCCA requires the same structural features of RICO because they are associated-in-fact enterprises and the jury should have been given instructions in line with RICO.

A split division of the state court of appeals rejected this argument, citing its 2001 decision in People v. James that rejected the same argument.

The state’s high court adopted the structural requirement inferred by the U.S. Supreme Court under RICO. It defined an associated-in-fact enterprise under COCCA as an enterprise with some structure — purpose, roles of individuals and longevity — and an organized, functional group of associates that is separate from the racketeering pattern.

Hospitals must bill Medicare before filing a lien against accident patients, the Colorado Supreme Court ruled. The opinion cleared up conflict between the state hospital lien statute and the federal Medicare Secondary Payer statute.

Peggy Harvey was hospitalized at a Centura Health hospital following a car crash. Harvey used Medicare and Medicaid and had additional medical payment coverage through her car insurance. Two weeks after medical discharge, the hospital filed a lien against Harvey even though it did not bill Medicare first.

Harvey sued Centura Health claiming, in compliance with the national Medicare Secondary Payer statute, the hospital should have billed Medicare before filing the lien. A trial court and a division of the Colorado Court of appeals both ruled against Harvey. The Colorado Supreme Court looked at the legislative intent of Colorado’s hospital lien statute to rule that Medicare is a patient’s primary insurer and that hospitals must bill the agency before filing liens.

In a sister case to Harvey v. Catholic Health Initiatives, the Colorado Supreme Court held that a hospital should have billed medicare before filing a lien against a patient involved in an auto accident.

For the same reasons listed in Harvey, the Colorado Supreme Court found the hospital filed the lien incorrectly based on the state’s hospital lien statute. The court reversed the earlier finding by the district court and remanded the case for further proceedings.

In Re Francis v. Wegener

An Aspen-based attorney was banned from ever representing himself pro se by the Colorado Supreme and must show absolute cause in any current or future litigation. “While the Colorado Constitution confers upon every person an undisputed right of access to our state courts, that right isn’t absolute,” said Justice Carlos Samour in a court opinion summary.  “A party’s constitutional right of access to the courts must sometimes yield to the constitutional right of other litigants and the public to have justice administered without denial or delay.”

The lawsuit lasted from 2010 through 2021 and included two escalations to the Colorado Court of Appeals, multiple case remands and one denied appeal. From 2013 through 2021 Francis and his affiliated parties filed 26 redundant lawsuits in Pitkin and Denver County courts.

On the 20th lawsuit, a Pitkin County judge banned Francis from filing any proceedings in the district “without first obtaining ‘an accompanying certification by an attorney that the pleading is well-grounded in fact and law.’” Pending disciplinary proceedings, the Colorado Supreme Court suspended Francis’ law license in November 2020. Starting in February 2021, despite his suspended law license and the court sanctions, Francis filed five lawsuits this time in Denver County. Aspen Mountain Condo Association and Benjamin Wagner asked the state Supreme Court to intervene after the final redundant lawsuit was filed in March.

The state’s high court recognized the high stakes of the case, “we do not take the request to issue an injunction against Francis lightly” the court wrote. It criticized Francis’ behavior, described as “what has essentially become a game of judicial whack-a-mole” and rejected his arguments against the petition. In addition to the rulings against Francis, the Colorado Supreme Court instructed all chief judges for the state districts to notify staff and instruct them to “reject any filing from Francis in violation of the injunction we issue today.”